Cold air plunging in with the storm will allow snow to accumulate and travel to become slippery, not only in the highest elevations but also in the valleys.

Snow, gusty winds and plummeting temperatures will accompany a new storm poised to blast a large area from the Rockies to the High Plains with winterlike weather this week. As of Monday night, more than two dozen winter storm watches and warnings were issued across parts of Montana, Idaho, Wyoming and South Dakota.

This latest storm is expected to unleash less snow when compared to the one that buried Montana with over 4 feet in late September. However, the upcoming snowstorm will have a much broader reach and pose a wide array of hazards.

Disruptions to travel and daily routines are likely.

Cold air plunging in with the storm will allow snow to accumulate and travel to become slippery, not only in the highest elevations but also in the valleys. 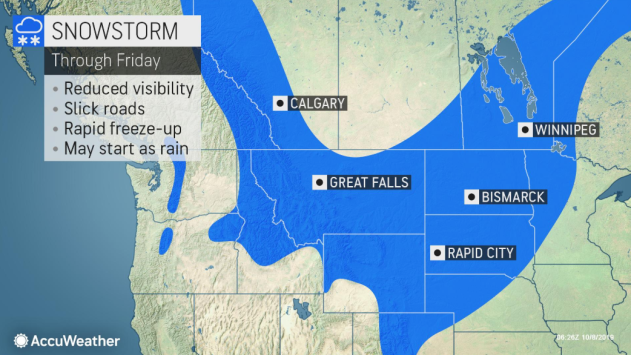 Temperatures can plunge by 30-60 degrees Fahrenheit in the span of 12-24 hours as the cold air swiftly replaces preceding mild conditions.

Billings, Montana, is expected to have a high near 70 on Tuesday, before temperatures plummet into the 20s with an AccuWeather RealFeel® Temperature in the teens as snow falls at night.

"The mild-to-cold transition during the storm will tend to cause the snow to cling to the trees at first, which can lead to broken limbs and power outages," Alex Sosnowski, AccuWeather senior meteorologist, said.

Accumulating snow will fall at pass level in the Washington Cascades. Motorists should be prepared for slippery conditions over Snoqualmie Pass on Tuesday.

Gusty winds whipping around the strengthening storm can also contribute to localized damage, as well as a heightened wildfire risk farther south.

The snow will become light and fluffy as the temperatures plummet, making it more susceptible to blowing and drifting in the wind.

In some areas, especially the lower elevations, precipitation may start as rain before transitioning to all snow. 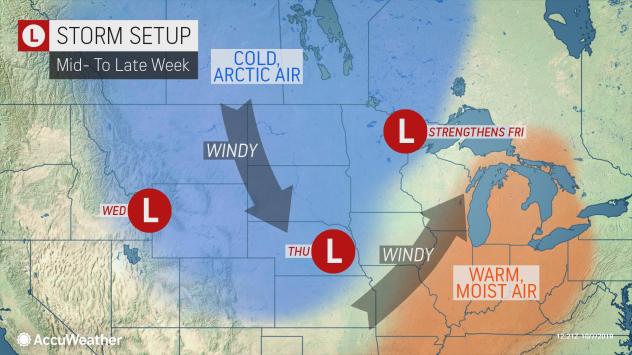 Any wet areas on untreated roads and sidewalks may freeze up suddenly as it turns colder, creating a thin layer of ice that may be hidden by falling snow.

The snowstorm arrived in the Canadian Rockies late on Monday and will reach the northern Rockies of the United States on Tuesday and Tuesday night.

Cities that can expect at least several inches of snowfall and a period of slippery travel early this week include Calgary and Great Falls, Missoula, Bozeman and Billings, Montana. 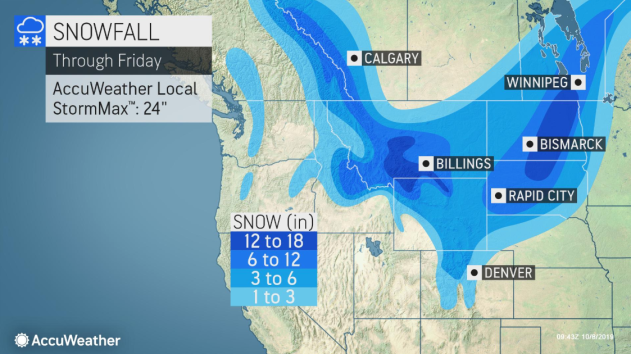 "Some of the north- and east-facing slopes of the Sawtooth, Lewis and Clark, Bighorn, Bitterroot, Clearwater, Absaroka and Tetons are among the locations that may receive 6-12 inches of snow from the storm," Sosnowski said.

An AccuWeather Local StormMax™ of 24 inches of snow is expected through Thursday.

Experts debunk 4 winter driving myths Which places can expect another snowy winter? AccuWeather’s winter forecast has the answer to this — and much more Fireballs may flash across night sky as 2 meteor showers peak this week Unstable atmosphere to trigger potentially severe storms, snow in Midwest late this week

The Washington and Oregon Cascades and Blue Mountains are also likely to be whitened by fresh accumulation early in the week. Conditions could turn slippery for a time over I-90's Snoqualmie Pass.

Snow is also forecast to develop, along with a dramatic temperature plunge, over parts of Colorado, including the Denver area.

The AccuWeather RealFeel Temperature is likely to be in the teens by late Wednesday night into Thursday after topping out in the low 80s on Tuesday afternoon in the Mile High City.

This is likely to be the first snowfall of the season for Denver.

AccuWeather meteorologists expect the storm to spread into the northern Plains and Midwest during the latter part of the week.

"The storm will actually have two parts," Sosnowski said. 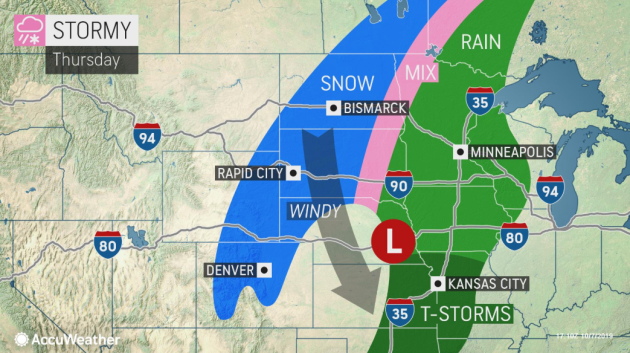 After the first part of the storm clobbers the northern and central Rockies and High Plains into Thursday, the second part of the storm will ramp up over the eastern portions of the Dakotas to western Minnesota late this week.

"There's a chance blizzard conditions unfold in part of this area as temperatures plummet, winds increase and rain changes to heavy snow to end the week," Sosnowski said. 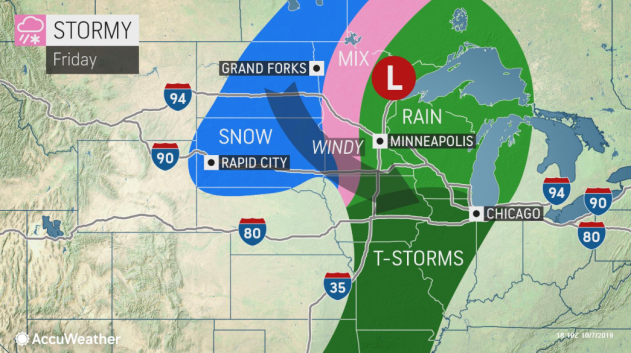 People should begin preparing for a potential snowfall and rapid freeze-up that can disrupt travel plans, school and work routines.

AccuWeather will continue to provide updates on the storm in the coming days, including snowfall amounts and the potential for severe weather to occur in part of the nation's midsection late in the week.

Behind the storm, an Arctic high-pressure system will settle over the Rockies, leading to record-challenging cold in many locations.

Spokane and Seattle, Washington; Portland, Oregon; Boise, Idaho; Billings; Cheyenne, Wyoming; Denver; Rapid City, South Dakota; and Scottsbluff, Nebraska, are just some of the cities that could stamp new record lows into the history books during the middle and latter part of the week.

Download the free AccuWeather app to see when snow could impact your area. Keep checking back for updates on AccuWeather.com and stay tuned to the AccuWeather Network on DirecTV, Frontier and Verizon Fios.

Rescues underway in Louisiana after vessel capsized amid sev... What volcanic ash does to your health and the environment