The brightly colored landcrabs were quite a sight to behold as an “unusually high density” of the crustaceans overtook roadways and headed toward the coast this year.

A recent increase in the Cuban crab population is causing transportation problems, posing a threat to migrating crabs.

Travelers to Cuba's Bay of Pigs, a southern coastline region in the country, recently experienced a colorful invasion courtesy of crustacean visitors. The Bay of Pigs is historical for being where United States-aided Cuban exiles landed in 1961 in an attempt to end Fidel Castro's revolution, and the area lies in a national park where much of the country's wildlife can be viewed. Another wildlife visitor, the land crab, brings a migration phenomenon that happens every year, but one that saw a boost due to a couple of factors this season.

Tourists in the month of March were treated to a heavy migration of crabs to the southern coast of Cuba, partially brought on by an early spring rain triggered by a cold front. Local residents of the Bay of Pigs area reported that the crab emergence was "unprecedented," and early for the spring season, according to Reuters.

The astonishing 2022 migration of red, yellow, and black land crabs from the forests to the Cuban coastline can be traced back to 2020 when the COVID-19 pandemic left the Bay of Pigs area roads nearly clear of tourists.

"There was very little traffic and very little tourism," local parking lot guard Angel Iraola told Reuters. "There are more crabs now than there have been in many years." 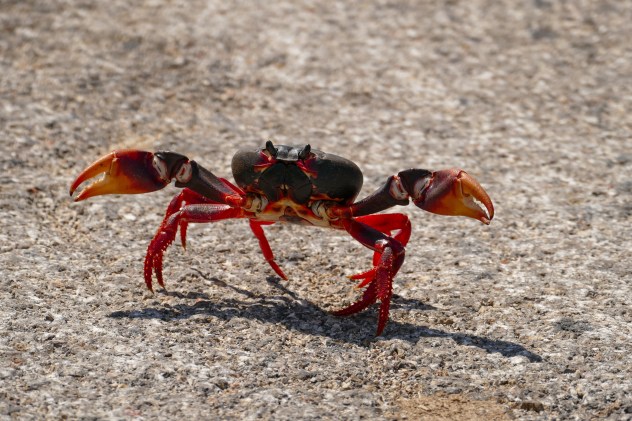 A black and red crab walks on Giron Beach, Cuba. The colorful animals have begun their annual migration through the country's Bay of Pigs. (Photo via Getty)

Having the territory to themselves, a crab repopulation occurred in the two years since the pandemic began, leading to the never-before-seen numbers. Though not a direct correlation between pandemic and repopulation, the sheer size of the colorful creatures' marching brigade is still something to recognize.

"We have observed that the migrations have had an unusually high density of crabs," Cuban environmental ministry scientist Reinaldo Santana Aguilar told Reuters. "It is very likely that the crab populations have recovered and that is why there is such a strong migration now." 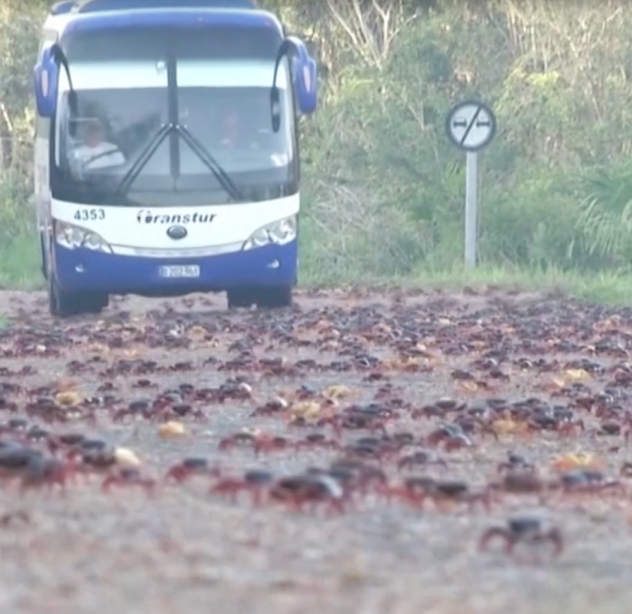 A local bus attempts to avoid the thousands of crabs marching toward the coastline in Cuba. (Photo via Reuters)

With 10 legs apiece, the land crabs appeared in many different colors, heading down the road in their unique sideways shuffle. This annual migration can create transportation issues for those looking to avoid the crawling creatures. Footage from Mantanzas, Cuba, showed resident Giordanis Durán getting creative by mopping crabs off of roadways to avoid the animals' demise from vehicles.

Duran later told Reuters that the maneuver not only helped save the crabs but prevented the creatures' claws from puncturing local tires, a serious travel issue in the country. When the crab migration descended on Cuba in 2017, one local in the Bay of Pigs said that his tire repair business was booming due to the claw-ridden roads, saying that "all the cars" that passed in his area received tire punctures.

Tremendous swarm of bugs crawls across the Outback

'Ruh-roh:' Scooby the dog took rescuers on wild ride down the LA river