Update: The launch was originally scheduled for June 13, however, it has been postponed until Monday evening.

Between 9:05 and 9:20 p.m. EDT, a sounding rocket will take off from the Wallops Flight Facility releasing colorful vapor clouds roughly 100 miles above the earth.

The rocket launch at @NASA_Wallops launch has been rescheduled for no earlier than June 19, between 9:06 and 9:21 p.m. .

Known as “vapor tracers”, the harmless clouds are formed by an interaction between barium, strontium and cupric-oxide.

Cast out between six and 12 miles, the clouds will help NASA scientists on the ground to track particle motions in space.

If the weather-dependent launch goes ahead, sky gazers living from New York to North Carolina will be able to spot the colorful clouds. 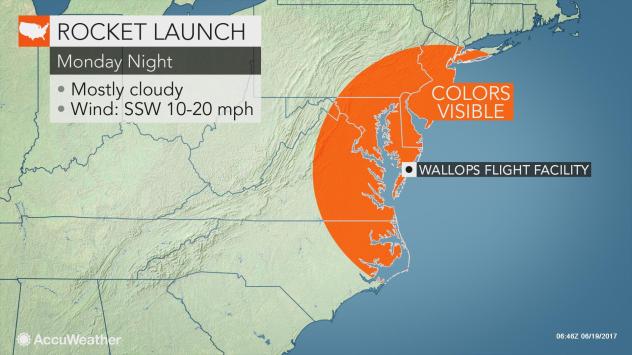 The experiment has been scrubbed seven times previously, five of which were a result of weather conditions including winds and clouds.

However, Monday's launch attempt may face weather issues again as severe storms are expected in the evening. Conditions will be humid with periods of rain throughout the night.

"With strong thunderstorms in the area, the calm, cloud-free conditions necessary for the rocket launch are unlikely on Monday night," AccuWeather Meteorologist Faith Eherts said.

The NASA Visitor Center at Wallops will open at 8 p.m. on launch day for viewing the flight.

Those who live farther afield can get launch updates from the Wallops facility on Facebook and Twitter.