It was quite the scene in Brookings, Oregon, on December 14, as inflatable snowmen had a show down as strong winds pushed them around.

A stormy weather pattern is expected to persist across much of Europe into next week, spelling tricky travel conditions for many ahead of the Christmas holiday.

The unsettled weather will impact millions of people who have plans to travel leading up to Christmas and could also bring snow to several countries on Christmas Day.

Holiday travel began to ramp up at the end of this week as rainfall spread from the United Kingdom and France into the Netherlands and Germany.

This storm is one that will continue to move eastward across Europe throughout the weekend.

As the storm reaches parts of Eastern Europe, it will run into a pool of cool air, changing much of the precipitation into snow.

While heavy rainfall and gusty winds will occur throughout France and Poland on Saturday, more snow is possible from northeastern Poland to Ukraine, Belarus and the Baltic states into Sunday.

This will lead to a continued threat for slick roads throughout the region. 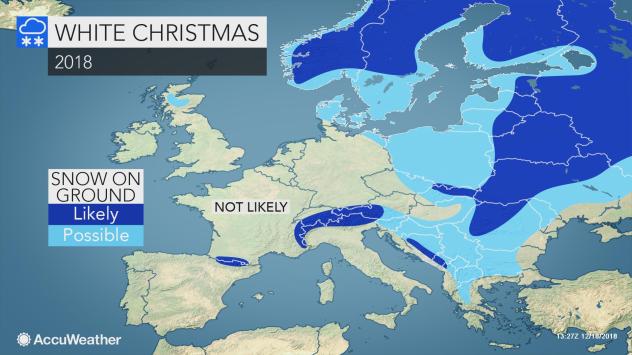 Cold air will remain entrenched across eastern Europe in the days leading up to Christmas, which may allow any snow that falls through this weekend to linger until Christmas Day.

More unsettled weather will shift into Ireland and the southern U.K. on Sunday as a combination of rain and gusty winds could bring another round of travel disruptions.

Rain is also possible from northern France into Germany by the end of the weekend.

The potential exists for heavy snow to inundate the Alps and Carpathian Mountains on Monday, Christmas Eve, leading to dangerous travel throughout the mountains of Switzerland, Austria, Slovenia and Romania.

Meanwhile, rain will inundate Belgium, southern England and Germany, which could lead to some minor travel delays. 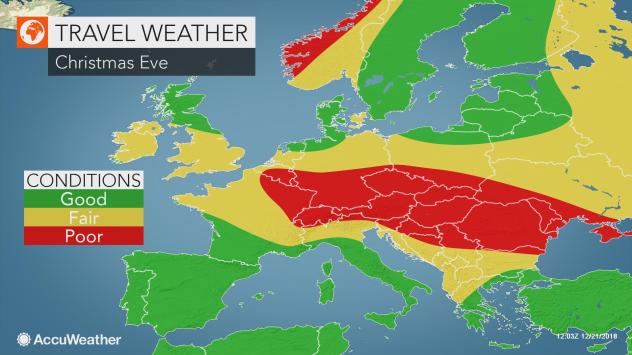 "This storm will likely impact last-minute Christmas deliveries and travel, and any outdoor Christmas Eve services are likely to be impacted as well," said AccuWeather Meteorologist Tyler Roys.

On both Christmas and Christmas Eve, heavy sea-effect snow will batter the west coast of Norway. However, travel in and out of Oslo will not be impacted by this.

By Christmas Day, high pressure will bring drier air to the U.K. and much of western Europe.

While the largely dry weather will promote good travel conditions, it will also mean that there will not be a white Christmas for locations across western Europe. 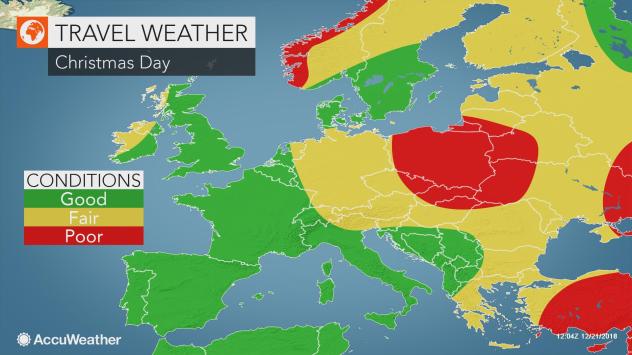 The same system bringing snow to the Alps on Christmas Eve will reach eastern Ukraine and Turkey for Christmas Day. A northwesterly flow off the southern Baltic Sea will bring some light snow showers across Poland, western Belarus and western Ukraine.

Following the Christmas holiday, high pressure will hold over central Europe through Thursday, keeping it dry from the U. K. and Spain to the Baltic states. The storm track could bring some nuisance snow showers from Scandinavia into eastern Europe through the end of the week.