California wildfire tears through camp for children with cancer

Volunteers and families say they’re devastated but determined to continue their mission after a wildfire wrecked a camp for children with cancer in California.

Devastation has spread through California and Oregon as wildfires take over the west coast, and a campground for children with cancer has become the latest tragic casualty.

Camp Okizu in Butte County, California, was brought to rubble and continues to smolder after the wildfires in the area made their way to the camps grounds in Berry Creek.

Okizu serves families with a child who has cancer residing in Northern California, and aims to offer peer support, respite, mentoring and recreational programs. Last year, they had over 3,000 participants in the camp. 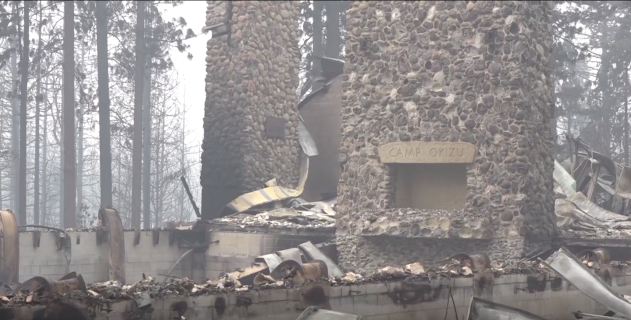 Some log cabins at Camp Okizu did not survive after the Bear Fire in California tore through the grounds. (photo/Bill Wadell)

"The word Okizu actually means unity and bringing people together, so we're really bummed about that," Hanna Malak, a volunteer board member at Okizu, told AccuWeather's Bill Wadell. "Its still too early to figure out what our plan of attack is."

Malak has volunteered at the camp for 20 years. His own brother was diagnosed with leukemia as a child, but is now doing great and has recovered in health.

Several log cabins at Okizu were demolished by the Bear Fire, which is now part of the large North Complex West Zone that has burned over 250,000 acres and remains less than a quarter contained. Winds in the area fanned the flames, allowing the fire to expand through the camp.

Due to the coronavirus, all camp programs have been temporarily moved to online format, which they will continue for the foreseeable future. Rebuilding plans have not yet been discussed. 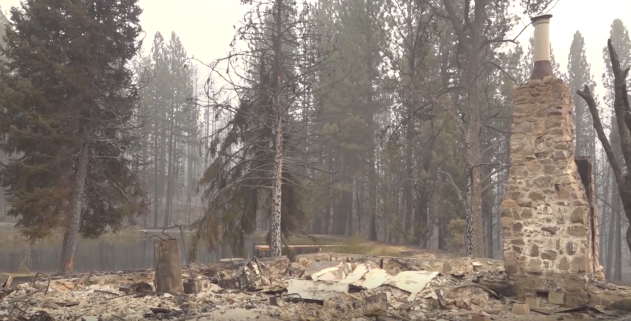 Parts of Okizu continues to smolder after the fire tore through the area. (Photo/Bill Wadell)

Hieke and Pat Henry from Oak Grove, California, are one of the many families who have been attending the camp, as their son Nathan was diagnosed with acute blastic leukemia at just two and a half years old and his doctors at the time recommended they get involved with Okizu. Nathan is now 16 and the family still attends the camp.

"It is his favorite place on the planet. All of ours really," Hieke Henry said.

While the future of Okizu remains up in the air, Hieke and Pat's son hopes to become a junior counselor at the camp, and the fires have not dulled his aspirations.

"It’s a magical place," Pat Henry said. "There were things up there that could never be replaced, but the memories we'll have forever and hopefully we can create more if people will help and get us going again."