Residents in the burn areas around California are on alert for major mud flows and flooding as heavy rain returns over a large part of the state.

After a dry start to the week, a new storm will spread rounds of rain across most of California into Thursday.

Rain, mountain snow and gusty winds will also spread across the Northwest during this time, but California will face the greatest hazards to lives and property.

"Tapping a feed of tropical moisture, this storm will bring moderate to heavy rainfall across the state," AccuWeather Meteorologist Jim Andrews said.

The potential exists for 2 to 6 inches of rain, with locally higher amounts, to inundate the area north of Los Angeles to Point Conception, as well as the intermediate western slopes of the Sierra Nevada. 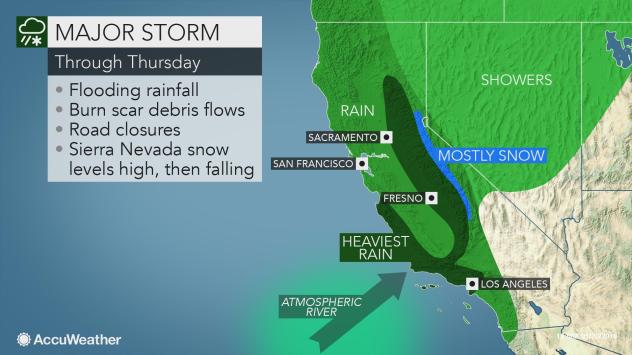 "The city received around 1.75 inches back on January 8-9, and this upcoming storm could yield around 2 inches on Wednesday night into Thursday," he said.

It was during that time that the Montecito area was devastated by deadly mudslides. Residents here and in other communities around the burn areas are being put on alert for more destructive flooding rain and debris flows at midweek.

"While any meaningful rain, even heavy rain, is dearly needed given the abnormally low seasonal rainfall thus far, any soakings will have the potential to trigger another round of mud flows below recent burn scars," Andrews said.

Santa Barbara County officials have already issued a Pre-Evacuation Advisory for the areas below the Thomas, Sherpa, Whittier and Alama fires.

Pre-Evacuation Advisory: The NWS indicates a storm capable of producing debris flows & flooding will arrive in SB County on Tues night. If you are in or below the burn areas, you should begin to PREPARE to evacuate. More info will be provided tomorrow & at https://t.co/YqDKvUfZIM

While the heaviest rain is expected farther to the north, urban and low-lying flash flooding can also plague Los Angeles and San Diego.

Downpours can create slow travel and hazards for motorists by reducing visibility and heightening the risk of vehicles hydroplaning when traveling at highway speeds.

Heavy rain and flooding issues may not be confined to the burn areas in California.

A surge of warmer air with the storm’s arrival will send snow levels in the Sierra generally above 7,000 feet. Feet of snow will bury the mountain peaks, which will be a boon for the ski resorts.

"That warming, when combined with the heavy rain, can lead to melting of snow cover from the lower slopes of the Sierra, bringing a chance of mostly minor flooding," Andrews said.

Rainfall is not expected to be as problematic in San Francisco and Sacramento, but gusty winds may impact air and road travelers.

Rain should dominate over the major passes early in the storm, Andrews said.

Travelers, including those on I-80's Donner Pass, are likely to face the return of snow-packed roads, chain restrictions and even closures later in the week.

"Cooling beginning on Thursday could drop snow levels down to near 4,000 feet along and north of I-80,” Andrews said.

Travel disruptions may not end with Thursday.

“A second storm, this one colder and farther north, will bring another bout of rain and mountain snow to mostly northern and Central California Friday and into the weekend,” Andrews said.

Snow may drop to even lower elevations in the northern Sierra, potentially to the levels seen with the storm late last week (which were around 3,000 feet).

This second storm is not expected to bring more rain to Southern California next weekend.