Storm chaser Reed Timmer captured a tornado destroying a structure in Wyoming on Tuesday. Later that evening, another twister ripped across the border into Sioux Falls, South Dakota, demolishing buildings and tossing cars.

A tornado warning was issued by the National Weather Service (NWS) shortly after 11 p.m. CDT Tuesday evening for Sioux Falls and surrounding areas, and the warning remained in effect until midnight. The NWS warned that wind gusts of at least 90 mph were possible with the storm and urged residents to take cover. 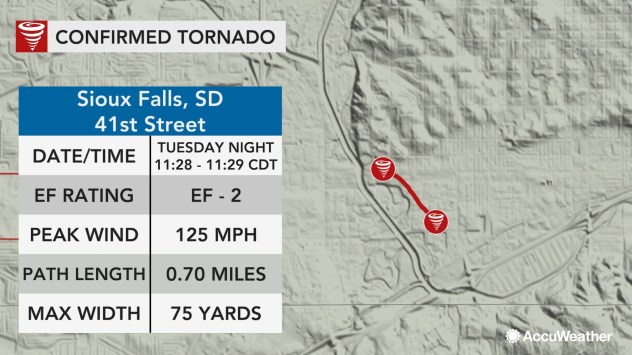 Shortly after the storms tore through the area, there were numerous reports and photos of extensive damage to trees, cars, homes and businesses around the city.

The Avera Behavioral Health Center was evacuated after suffering damage from the storm, while the Avera Heart Hospital saw its roof get ripped off from the intense winds. While there were no reports of casualities, according to Mayor Paul TenHaken, the area's 911 system has been backed up and over 15,000 residents were left without power, according to poweroutage.us.

The Sioux Falls Police Department issued a "No Travel Advisory" in the wake of the storms due to numerous downed power lines and trees covering roadways in southeastern parts of the city.

Motorists were urged to remain off roadways until emergency management crews cleaned up the debris.

Although the threat for severe weather has ended in southeastern South Dakota with the storms having moved into Iowa, flash flood warnings remain in effect into Wednesday afternoon following several inches of rain from Tuesday night's storms.

took this on a side street off west 41st in front of an apartment building. three cars engulfed by I don't know how many trees. pic.twitter.com/qSb3KQcSIM

A better look at some of the damage from the tornado that went through Sioux Falls late Tuesday evening. pic.twitter.com/fny3djB0Sj