Hurricane Ian cuts power to 1.5M in Florida, submerges southwestern parts of the state. Follow live updates.
Hurricane Ian’s dangers are far from over as another U.S. landfall is predicted. Get the forecast.

For the second time in less than a year, the president traveled to Kentucky on Monday to tour devastation wrought by a natural disaster that killed 38 people, including four small children.

Biden gave a speech to Kentucky residents impacted by the flooding while flanked by Rep. Hal Rogers, a Republican who represents the eastern part of the state, as well as Democratic Gov. Andy Beshear.

"They're not just Kentuckians they're Americans. This happened in America. It's an America problem and we're all Americans. Everyone has an obligation to help and we have the capacity to do this," Biden said.

Biden said that he met with Beshear and informed the governor that the $1.2 trillion infrastructure law will be able to assist Kentucky in recovering from the historic flooding. 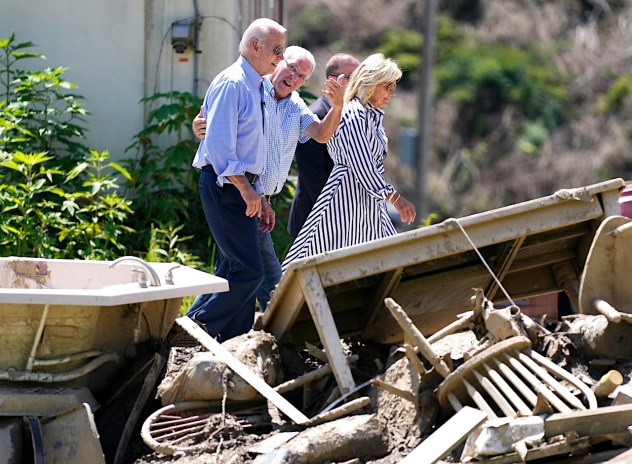 "We're going to see, for example, if they have got to put a new waterline in a community there's no reason why they can't at the same time be digging a line that puts in a whole new modern line for Internet connections," Biden said.

"Why, why can't we do that? So this is going to be different. We're going to come back better than before."

Biden added that he was confident in Beshear's leadership of the state in recovering from the disaster.

"This is something we can all do, we can get this done. Because we're the only country in the world that has come out of every major disaster better than coming into it," Biden said.

"The bad news for you is that I'm coming back because I want to see it."

Beshear, in his comments before Biden, said 38 people have died from the flooding, including four small children.

"Communities have been completely destroyed if not wiped off the map," Beshear said. "Once again, our people are hurting, facing loss and hardship on a scale that is hard to process."

Biden and first lady Jill Biden departed an Air Force base in Delaware and arrived in Lexington, Ky., late Monday morning. The Bidens had spent the weekend at their home in Delaware.

The president and first lady traveled to Lost Creek, about 75 miles southeast of Lexington, to tour damage from the devastating floods last month that killed more than three dozen people.

The trip is Biden's first since he tested positive for COVID-19 on July 21, recovered and then tested positive again about a week later with a rebound infection. The president tested negative for the virus on Sunday.

Beshear has said that hundreds of people in Kentucky have been left homeless as a result of "the most devastating flooding event our state has ever seen," according to Politico.

Biden declared a disaster for Kentucky late last month, expanding federal emergency assistance that will provide more than $3.1 million in relief funds for cleanup and other tactical measures, the White House said.

Beshear said Monday that Biden and his administration "have acted with greater speed" to issue the disaster declaration than he has ever seen.

"We recently got 100% coverage for a 30-day period that is going to help our communities and get this area dug out faster and now 12 impacted counties are eligible for individual assistance through FEMA," he said.

"Every time we have a request, the answer has been a quick 'yes' and a 'how else can we help.'"

After visiting with families in southeastern Kentucky, the president and the first lady were scheduled to depart the state at around 4:30 p.m. and return to Washington.

Monday's visit to Kentucky is his first since December, when he traveled there again to survey damage from a natural disaster. Nearly 80 people had died there after a tornado touched down in the southern part of the state.