The "Beast from the East" will bring a combination of dangerous cold and disruptive snowfall to the United Kingdom this week.

The "Beast from the East" refers to a strong area of high pressure that sets up over Scandinavia and pulls frigid air from Siberia to Europe and the U.K.

With the cold air in place, there will be several opportunities for snow to fall across the U.K. including the potential for a significant snowstorm late this week as Storm Emma arrives. 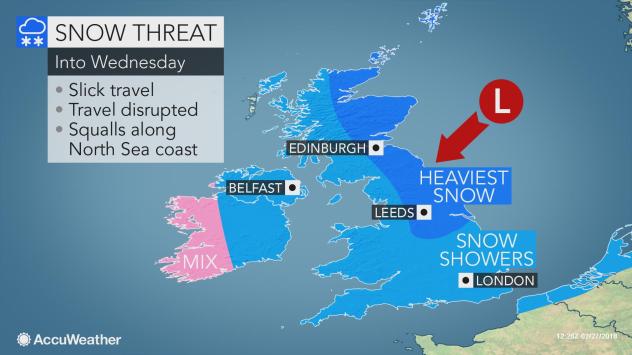 "Sea-effect snow will stream from east to west over the U.K. each day into Thursday," AccuWeather Meteorologist Tyler Roys said.

The snow will be most prevalent along the east coast of Scotland and England, where there can be pockets of 2-8 cm (1-3 inches) daily. Heavier squalls may also occur, dramatically reducing visibility and causing snow to rapidly settle on roads.

"Impacts will include snow-covered roads and transportation delays," Roys said.

At least four people have been killed in weather-related accidents on roadways so far this week, according to The Guardian.

All Greater Anglia train service will be impacted into Thursday. At least 50 flights have been canceled at Heathrow in advance of the stormy weather.

Southeastern, Southern and Great Northern rail service has also been affected by the snowfall.

The harsh conditions forced more than 100 schools to close across the country, according to The Telegraph.

Another burst of locally heavy snow is expected on Wednesday, impacting areas from northeast England through eastern Scotland, including Edinburgh, Glasgow and Newcastle.

Bands of snow will continue to impact far northern England into Scotland on Thursday; however, Storm Emma will approach the country from the south bringing the threat for significant snowfall.

Snow may begin to break out as early as Thursday afternoon across southwest and southern England as well as southern Wales.

The snow is expected to increase and expand northward Thursday night into Friday. Some locations in the lower elevations of England and Wales will likely see their heaviest snowfall of the season during this time.

"Snowfall in excess of 15 cm (6 inches) is expected across southwest England and southern Wales," said Roys.

Disruption to travel is possible Thursday night and Friday across the entire country with the most significant delays and cancellations expected across Wales and England.

The potential exists for significant snowfall to expand throughout the remainder of Wales and much of England, including Greater London. Significant travel delays and school closures are possible.

The arrival of Storm Emma will bring milder air from the Atlantic back into southern parts of the country by Saturday with a continued easing of the cold expected on Sunday. 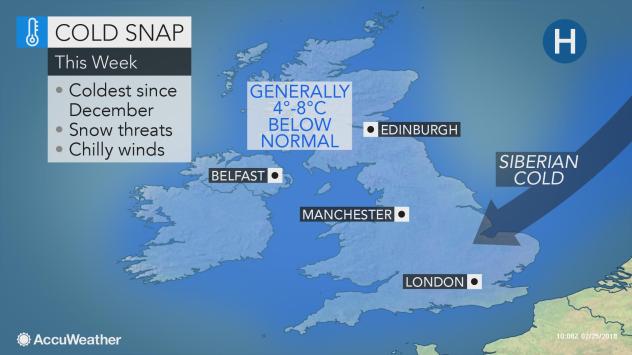 Areas that escape the worst of the snowfall will still have to endure to an extended period of dangerous cold air.

Temperatures will be held 4-8 degrees Celsius (7-14 degrees Fahrenheit) below normal into the weekend.

With the frigid air in control, temperatures will continue to fall into midweek. Many locations in England, and Scotland will see temperatures fail to surpass 0 C (32 F) on Wednesday.

A chilly breeze will create even lower AccuWeather RealFeel&reg; Temperatures.

Lows at midweek may bottom out between 7 below zero and 3 below zero C (19-26 F) in most communities. The homeless should be urged to head to warming centers, while care should be taken to ensure livestock have proper shelter.

Residents will also notice an increase in heating costs to combat the cold.

The impending frigid air will have residents questioning if the calendar has been turned back to December. Across Wales and England, such prolonged cold in February has not been experienced since early February 2012.

Looking ahead to March, the AccuWeather long-range forecasters anticipate lingering chill to delay the onset of spring. However, a transition to milder-than-normal conditions are expected.