Autumn and summer to battle it out over Northeast into October

Fall officially began on Monday, Sept. 23, but two seasons, summer and autumn, will take turns controlling the weather over much of the northeastern United States in the coming weeks.

While temperatures will swing back and forth, the overall weather pattern will tend to favor above-average temperatures for the two-week period ending in early October.

"This conclusion has to do with the anticipated average position of the jet stream," AccuWeather Senior Meteorologist Brett Anderson said.

"The setup will favor a southward dip in the West and a broad, northward bulge centered over the lower Mississippi Valley," according to Anderson. 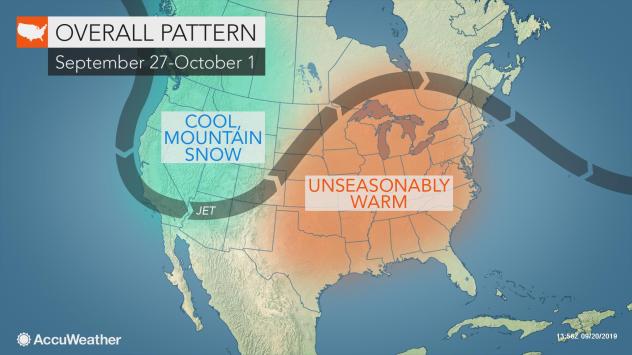 "There will be some fluctuations in the jet stream pattern which are likely to allow breaks of cool air to sweep from the Great Lakes to the Northeast states," Anderson said.

An episode of very warm conditions is in store for coastal parts of the Northeast into Monday, following crisp and cool weather from the middle to latter part of this past week.

Highs into Monday are forecast to range from the middle 80s to near 90.

One batch of cool air is forecast to advance from the Great Lakes on Monday to the Northeast on Tuesday.

The clash of the warm and cold is likely to spark some gusty thunderstorms across parts of the Northeast on Monday. 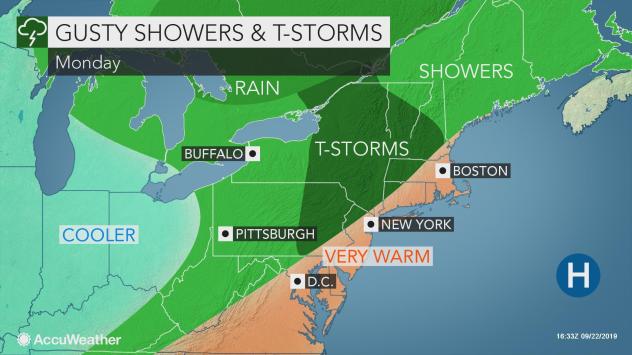 While this air is not nearly as cool as that of this past week, temperatures will be shaved by an average of 10-20 degrees from their peak this past weekend.

By Tuesday, highs are forecast to range from the middle 60s over northern New England to the middle 80s around the Chesapeake Bay. 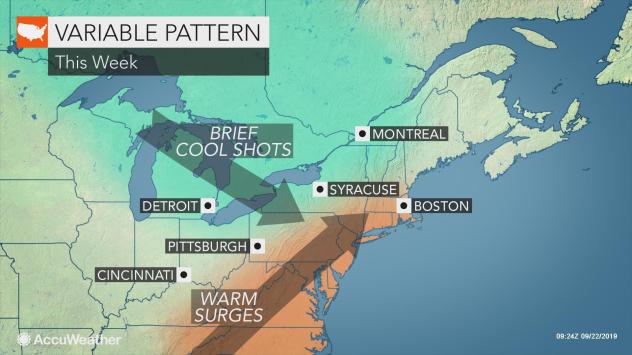 Temperatures may dip to frosty levels on one or more clear nights over northern New York state and northern New England. That won't be the first time for some areas, however. Temperatures during this past week's cool air dipped as low as the middle 20s over the Adirondack Mountains.

Warm and cool air will trade places again during the latter part of the week.

How extreme weather led to one of the 20th century’s most iconic photos
Atlantic likely to churn out tropical systems into 2nd half of September
In case you missed it: Last week of summer features a major hurricane, deadly tropical storm and a taste of winter

Should a situation arise where low clouds form with a moist, easterly flow of air, daytime temperatures could be significantly lower from the Appalachians to the Atlantic coast.

During the pattern, the most significant temperature swings will be across the northern tier to the central Appalachians and the least noticeable over the lower part of the mid-Atlantic region.

The same pattern is likely to help steer tropical systems originating from Africa away from the coastal Northeast as well as the southern Atlantic coast. However, any system that brews in the Gulf of Mexico will have to be watched.

Download the free AccuWeather app to stay alert of tropical weather and surf advisories. Keep checking back for updates on AccuWeather.com and stay tuned to the AccuWeather Network on DirecTV, Frontier and Verizon Fios.