A gargantuan steel drum that was said to shudder every time it was full gave way to horrific damage — and it wasn’t the only devastating flood in the past stemming from a tempest other than water.

Most of the time, the word "flood" means a torrent of water rushing into a populated area, destroying property and taking lives. It might come from a river, a lake, runoff from heavy rainfall or a surge from an ocean, but it's water all the same.

However, floods with no water at all do happen, and they have devastating impacts not only economically but on the environment. Of the earliest in recorded history two stand out: The London beer flood in 1814, and the Dublin whiskey fire in 1875. 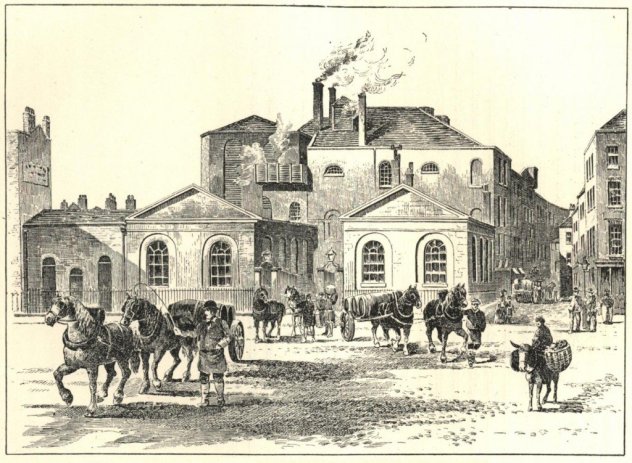 The Horse Shoe Brewery in London, where 264,000 gallons of beer spilled out into the street. (Brewers' Journal, 1906)

In St. Giles Rookery, a neighborhood in London known at the time for its poverty and crime rate, a 22-foot-tall wooden barrel of porter exploded at Horse Shoe Brewery and sent about 264,000 gallons cascading through streets and into homes. According to The Independent, a clerk near the scene gave his witness account to a local newspaper.

“I was on a platform about 30 feet from the vat when it burst. I heard the crash as it went off, and ran immediately to the storehouse, where the vat was situated," George Crick said. "It caused dreadful devastation on the premises - it knocked four butts over, and staved several, as the pressure was so excessive. Between 8 and 9,000 barrels of porter [were] lost.”

Eight people in total died, including three children. The owners of the brewery lost an estimated 23,000 British pounds' worth of beer, or about $2.2 million in today's money.

Contemporary historical analysis, according to The Independent, shows that the cooperation among the public and emergency responders in clearing the rubble and rescuing trapped survivors was extraordinary. Decades after the flood, stories circulated of bystanders flocking to the scene with buckets to collect and drink the spilled beer. Historians have debunked these theories, but the same can't be said for what happened in Dublin in 1875.

In the Liberties neighborhood, at Laurence Malone's warehouse where about 315,000 gallons of whiskey were stored, a fire started sometime between 4 and 8 p.m. on June 18, 1875. At about 9 p.m., the whiskey barrels exploded, according to the Irish Times. The river of burning liquor was 2 feet wide and 6 inches deep, and stretched more than 1,300 feet.

"The burning whiskey poured literally in torrents from the doors and windows of the burning pile, and rushed down Mill street and the other streets of the locality in flaming and lava like streams," one report in the Irish Examiner explained. "It is said that at least 30 houses have been burned. [...] It is utterly impossible to convey any true idea of the brilliancy of the blaze, the terrible intensity of the heat, or the extraordinary appearance of the whiskey torrent."

As most people fled for their lives from the burning buildings, some took advantage of the situation. The Irish Times reported passers-by using caps and boots to scoop up and drink whatever whiskey was not engulfed in flames.

"In all, 13 people are understood to have died as a result of the fire," the Times wrote. "None of the deceased perished in the flames, nor did they die of smoke inhalation - each succumbed to alcohol poisoning from drinking freely of the derelict whiskey."

A couple of decades later, on the other side of the pond, possibly the most prolific non-water flood in United States history rocked the city of Boston. 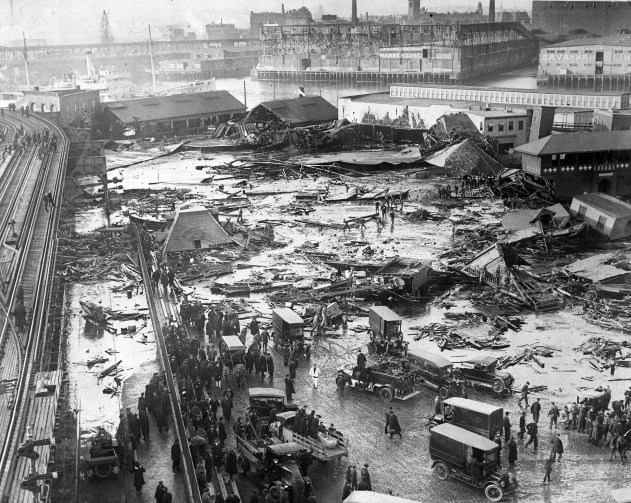 On the morning of Jan. 15, 1919, a gargantuan steel drum in the North End neighborhood of Boston burst open and sent 2.3 million gallons of thick molasses tearing through the streets and into the Boston Harbor. The 26-million-pound mass formed a 40-foot wave, sweeping up people, businesses, homes, power lines, even an elevated railway and a fire station.

The residents of the North End knew the 50-foot tank was structurally unstable, but they were used to it.

"There were often comments made by people around the vicinity that this tank would shudder and groan every time it was full, and it leaked from day one," Stephen Puleo, historian and author of Dark Tide, a book on the flood, told WBUR. "It was very customary for children of the North End to go and collect molasses with pails." 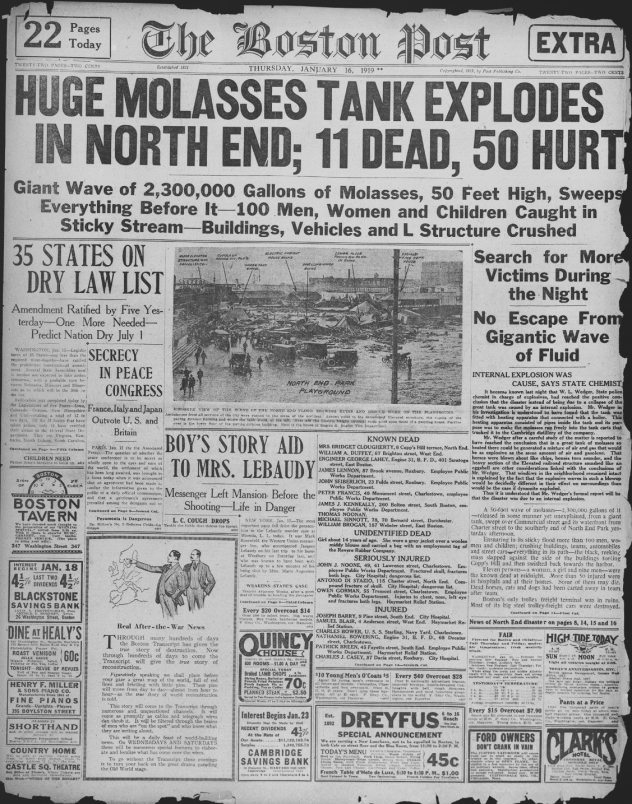 The leading headline in The Boston Post reported the Great Molasses Flood destroyed everything in its path, one day after the accident. (Boston Public Library)

After firefighters and volunteers were able to clean up the aftermath, 21 people were found dead. Residents filed a class action suit with the tank's owner, United States Industrial Alcohol Company.

According to the New England Historical Society, the trial pioneered the use of engineers, inspectors and other experts as witnesses to prove the company was negligent when building and maintaining the tank. After three years of hearings, the court found USIA guilty, and fined the company about $10.3 million, adjusted for inflation. 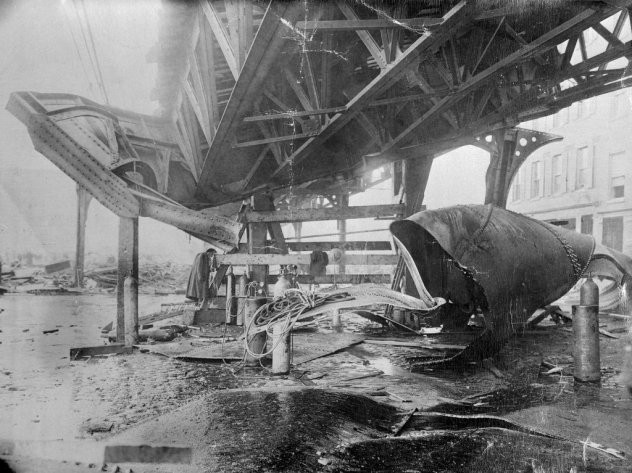 The aftermath of the elevated railway in the North End, destroyed by molasses. (Bettmann Archive)

"All the things we now take for granted in the business, that architects need to show their work, that engineers need to sign and seal their plans, that building inspectors need to come out and look at the project," Puleo wrote in Dark Tide. "All of that comes about as a result of the Great Boston Molasses Flood case."

One molasses flood is bad enough, but the disaster in Boston wasn't the only time such a flood has happened in the United States. Nearly a century later, in 2013, a tank in Honolulu Harbor filled with 233,000 gallons of the stuff spilled into the Pacific Ocean. The molasses, rich with sugar, allowed bacteria in the warm waters to thrive, which robbed fish and plant life of necessary oxygen and sunlight.

According to WBUR, the harbor didn't return to normal for months, and until then dead fish would rise to the water's surface by the thousands. All anyone could do was remove the fish while the molasses slowly dissipated into the ocean.

Food spillage is a common thread that links these floods together, but it's by far the only thing that can cause such a catastrophe. 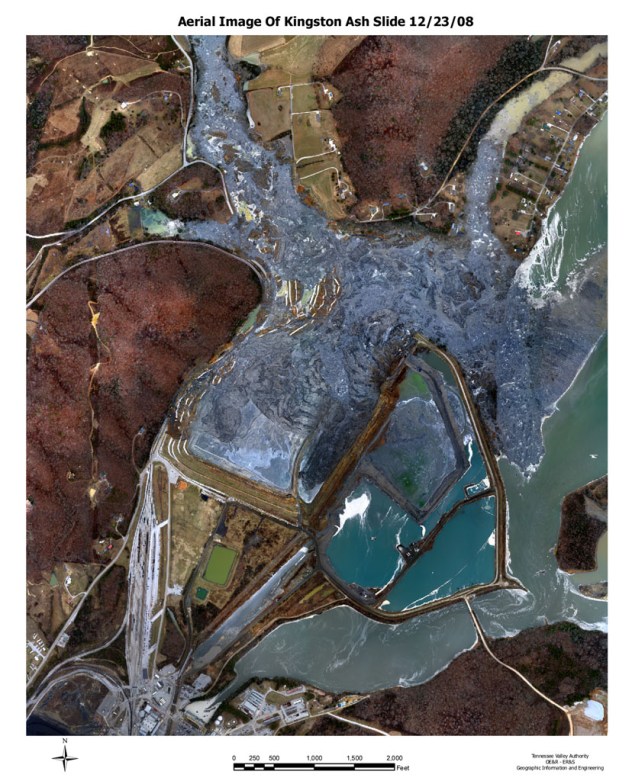 An image from above, the day after the coal ash spill in Kingston, Tennessee. (Tennessee Valley Authority)

In December 2008, the dike of a storage pond for coal ash slurry -- a byproduct of combustion -- collapsed and set loose 1.1 billion gallons of muck. It flooded neighborhoods and poured into the nearby Emory and Clinch Rivers, two tributaries of the Tennessee River.

The pond was part of the Tennessee Valley Authority's Kingston Fossil Plant, a power plant 40 miles outside of Knoxville. National Geographic called it the worst and largest industrial spill in U.S. history.

As soon as two years after the spill, workers and their families started experiencing arrhythmia, strokes, blood and lung cancer, lesions, dizziness and fainting after the coal ash had wreaked havoc on their bodies. Dozens have died since. 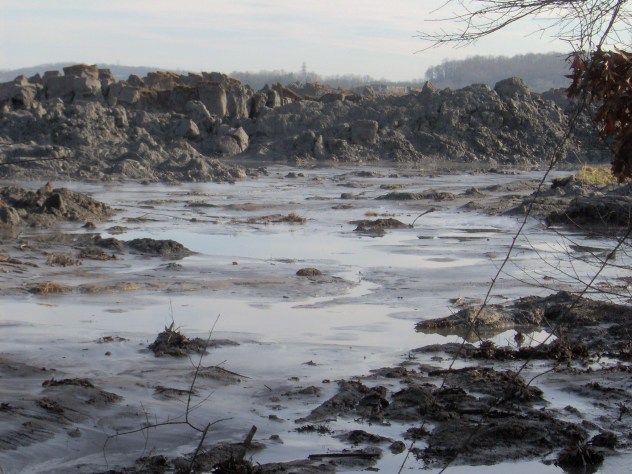 A wall of coal ash about a mile from the holding pond. (Brian Stansberry)

"TVA has given my husband a death sentence," Janie Clark, whose husband Ansol Clark was one of the first cleanup responders to the spill, told National Geographic. "They gave him an incurable blood disease and destroyed his heart. Coal ash is a dirty dark secret that has gone on in this state and this country way too long."

Since 2013, TVA has been embroiled in a lawsuit for damages and the cleanup crew's healthcare costs, Men's Journal wrote. A lawyer representing the workers estimated it may yet take years before there's any resolution. 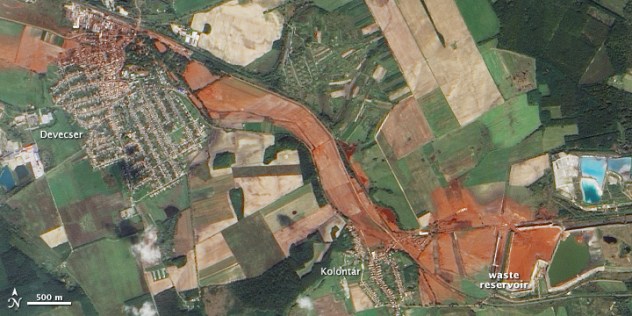 A NASA satellite view of the spill in Hungary. The aluminum oxide in the sludge gives it a reddish hue. (NASA)

Two years after the Kingston spill, in 2010, a caustic waste reservoir ruptured in Ajka, Hungary, located about 100 miles from Budapest. The sludge, a mixture of different toxic waste materials, primarily contained aluminum oxide which gave it the appearance of red mud.

BBC reported 35 million cubic feet of waste flooded three nearby villages in an area of 15 square miles, killing 10 people and wounding at least 120. The mud was nearly 8 feet deep in some places, and it formed a wave 3 to 7 feet high.

The Hungarian government declared a state of emergency in the flooded counties. Authorities poured several hundred tons of plaster into the Marcal and Torna Rivers to bind the sludge and prevent it from flowing further, The Guardian reported.

At the time, authorities attributed the cause to human error. In 2019, a court found 10 managerial staff members and employees of the company that owned the reservoir guilty of security and safety protocol infractions for waste storage that led to the flooding.