25 years later: The Great Flood of 1993 remains worst river flooding US has ever seen

Over the course of a three-month period in the summer of 1993, a slow-moving and historic flooding disaster unfolded across the midwestern United States, leaving economic ramifications that would be felt for years to come. Over 17 million acres were flooded across nine states across the Midwest during the summer of 1993, starting in June and lasting through August. This is an area larger than the entire state of West Virginia.

“The magnitude and severity of this flood event was simply overwhelming, and it ranks as one of the greatest natural disasters ever to hit the United States,” said Lee Larson, chief at the Hydrologic Research Laboratory (HRC).

This long-duration river flooding caused hundreds of levees failures, 50 fatalities and an estimated $15 billion in damages. 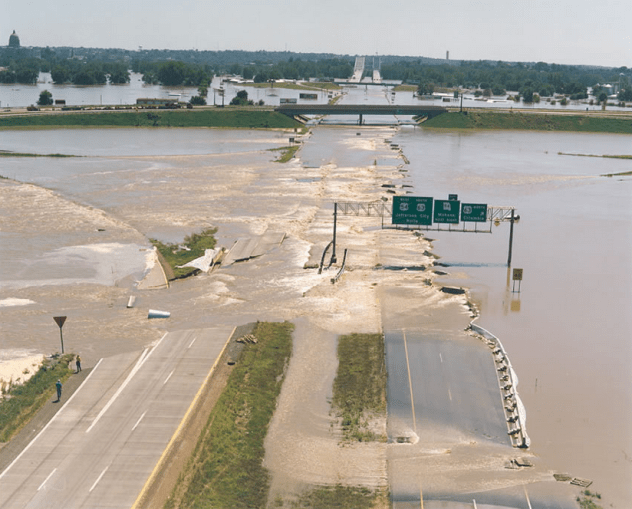 While the worst of the flooding occurred in the summer of 1993, impacts across the region lasted for years.

Of the 17 million acres that were flooded, a majority was being used as farmland. This had a long-term impact on the industry as some of the land was not able to be used again for farming for several years after flood waters had receded.

Shipping and transportation industries were also severely impacted during the height of the flooding.

“Barge traffic on the Missouri and Mississippi rivers was stopped for nearly two months,” the National Weather Service (NWS) said.

The inability for ships and barges to navigate the waters of these major waterways resulted in an economic loss of $2 million per day, according to the NWS.

High water also rendered some bridges that spanned across the Mississippi River unusable for weeks, disrupting travel across the region. In some cases, this meant taking a detour of over 100 miles just to make it to the other side of a flooded river. 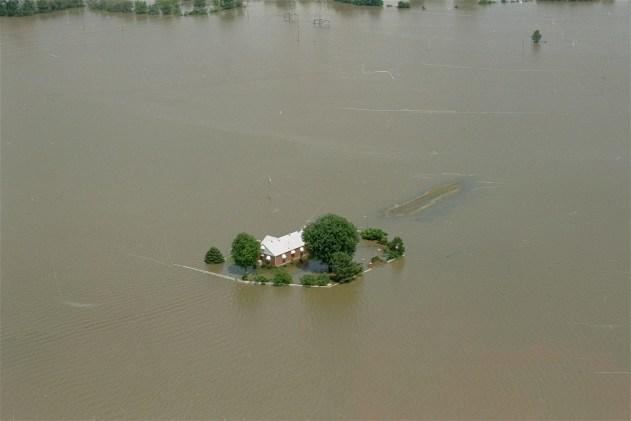 The historic flooding was not caused by one single rainfall event, but rather an extended period of above-normal rainfall across the same region.

“The stage was set in 1992 with a wet fall which resulted in above-normal soil moisture and reservoir levels in the Missouri and Upper Mississippi river basins,” the NWS said.

The wet autumn was followed by above-average snowfall during the winter. When all of this snow melted in the spring, it left the ground across the region saturated and prone to flooding.

The abundance of rain and snow in the seasons leading up to the summer of 1993 acted as key factors that contributed to the catastrophic flooding.

The other primary weather factor was the persistent weather pattern across the Midwest that lasted for several months.

“An abnormally stationary jet stream was positioned over the central part of the nation during this time. Moist, unstable air moving north from the Gulf of Mexico converged with unseasonably cool, dry air moving south from Canada,” the USGS said.

A jet stream is essentially an atmospheric highway located at the level where jets cruise. Winds in this high-speed river of air often reach 250 mph. Storms are guided in a generally west-to-east fashion due to jet streams.

“A critical factor affecting the record flooding was the near continuous nature of the rainfall. Many locations in the nine-state area experienced rain on 20 days or more in July, compared to an average of eight to nine days with rain,“ Larson added.

Intense thunderstorms during this time dumped a plethora of rain that not only caused rivers to swell but also triggered severe flash flooding.

One storm in Adrian, Minnesota, unloaded 7 inches of rain in a little over an hour, sending a wall of water rushing through the town that ripped asphalt from the streets. 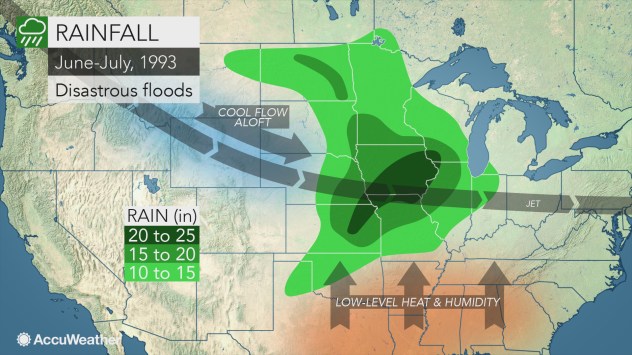 Rainfall totals over 1 foot were widespread across the region, but the heaviest rain focused on a zone from eastern Kansas through eastern Iowa.

More than a year’s worth of rain fell in just a few months with a few pockets in east-central Iowa measuring nearly 48 inches of rain between April and August. This is significantly higher than the 35 inches of precipitation that the area typically receives in an entire year.

Dozens of rivers across the region remained in a flood stage for months, including the Mississippi River and the Missouri River.

The Mississippi River at St. Louis crested just shy of 50 feet on Aug. 1, 1993, nearly 20 feet above the flood stage threshold. This was one of 92 water gauges to record an all-time record crest during the Great Flood of 1993. 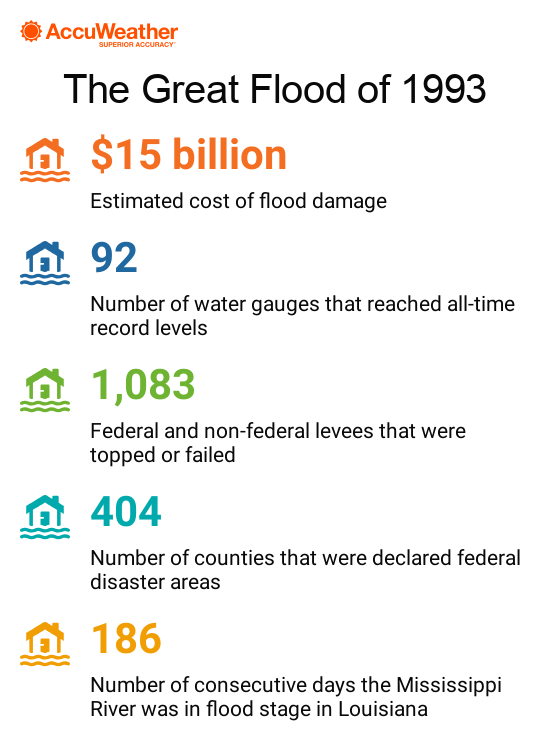 This extended period of hot and dry conditions across the Southeast during the summer of 1993 was the result of the same persistent weather pattern that dumped feet of rain across the Mississippi River Valley.

“The heat wave and drought in the Southeast, although less costly than the flooding, has been devastating for many of the area’s farmers,” the National Climatic Data Center (NCDC) said.

Disaster areas were declared across the region, including 89 of 100 counties in North Carolina, 154 of 159 counties in Georgia and the entirety of South Carolina.

This severe drought, combined with the extreme flooding in the central U.S., became the fourth multi-billion dollar weather disaster in the country over a 12-month period. 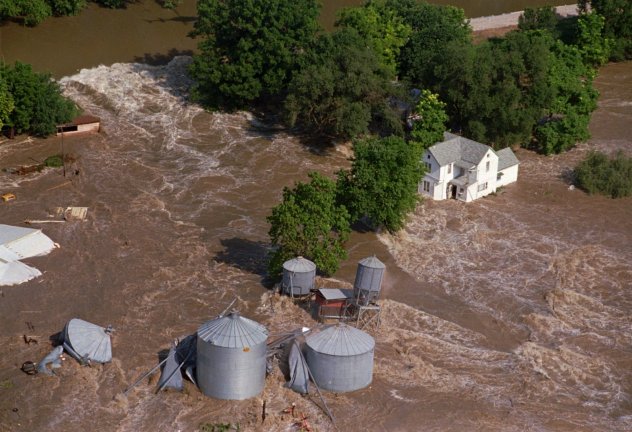 A levee in Monroe County,Ill, near Columbia, Ill, gives way to rushing waters from the Mississippi River Aug.1, 1993, flooding farmland. The houst at right,was caught in the current from the river, and removed from its foundation and carried downstream. (AP photo/James R. RFinley) 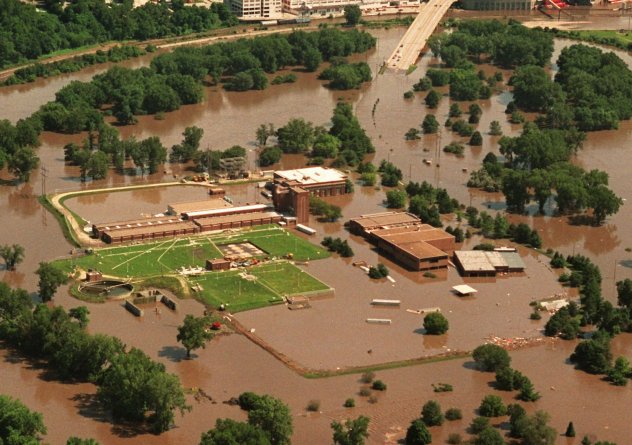 The water treatment plant sits in flood waters from the Raccoon River in Des Moines, Iowa, in this July 17, 1993 photo. An estimated 250,000 central Iowans were left without tap water for nearly two weeks in July during the flood of 1993. (AP Photo/Charlie Neibergall) 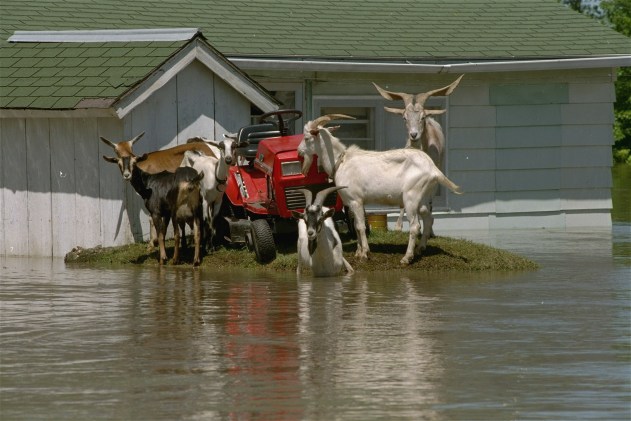 A group of goats gather on the only high ground left to them behind one of the many flooded homes in Lupus, Mo., Thursday, July 29, 1993. Lupus has been over run by record setting Missouri River flood waters which are continuing to rise. (AP Photo/Stephan Savoia) 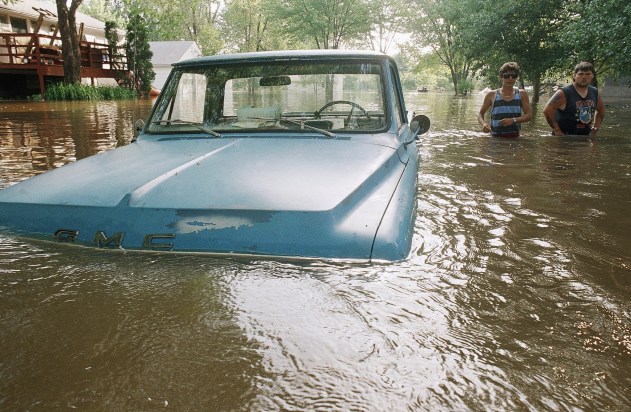 Shannon Rennert, of Moline, Ill., left, and Jim Sappington, of East Lawn, Ill., walk down a flooded street, Tuesday, June 29, 1993, Pleasant Valley, Iowa. Water from the Mississippi River is flooding many of the homes along its banks. Rennert and Sappington were in Pleasant valley to help Rennerts brother move his belongings. (AP Photo/John Gaps III) 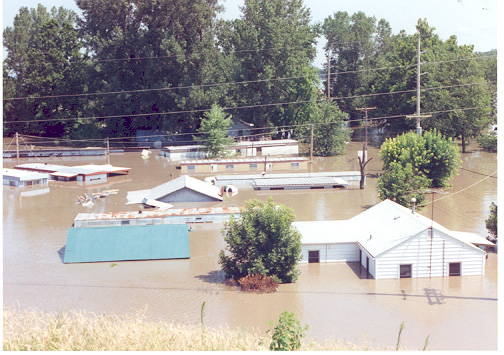 Homes and businesses underwater during the Great Flood of 1993. (Image/USGS) 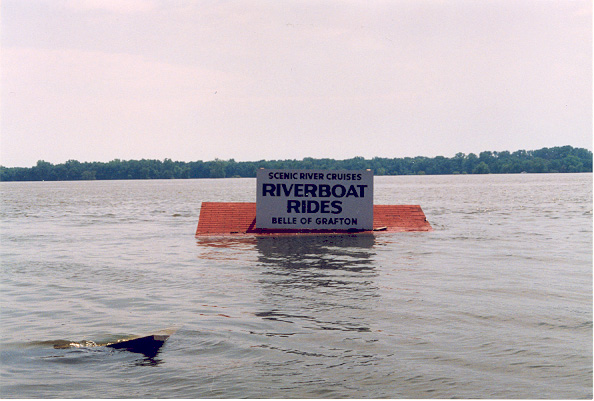 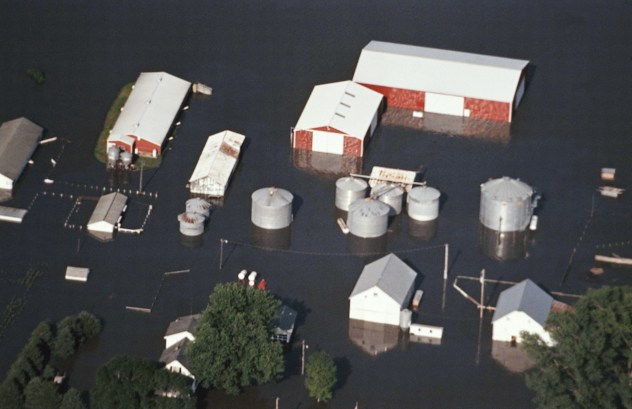 A rural is surrounded by flood waters Monday, July 12, 1993, Colfax, Iowa, Central Iowa was hit by heavy flooding after weeks of heavy rain in the upper Midwest. (AP Photo/Charlie Neibergall) 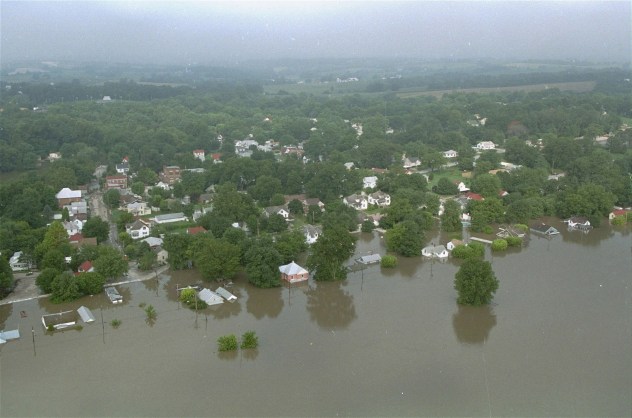 Houses along Main Street in Ste. Genevieve, Mo., are submerged up to the top of the first floor in floodwaters from the Mississippi River in this July 21, 1993 photo, during the Great Flood of 1993. A decade since it was nearly engulfed by the Mississippi River, this trove of antique shops, bed-and-breakfasts and 18th-century homes has a confidence as quiet and mighty as the river itself. (AP Photo/Tannen Maury) 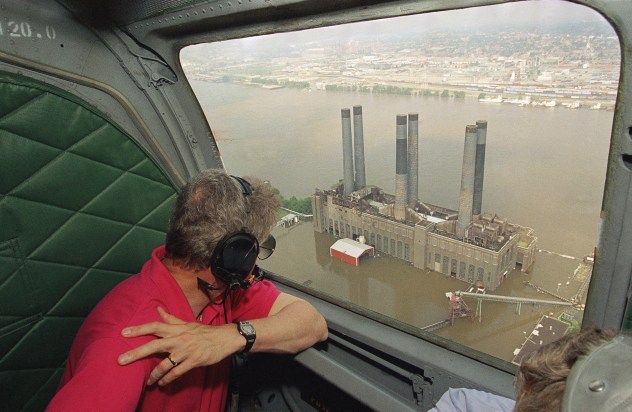 President Bill Clinton looks at a flooded power plant in the Mississippi-Missouri Rivers area near St. Louis on July 17, 1993. Clinton toured the area with Vice President Gore, governors from the area, and members of his cabinet. (AP Photo/Joe Marquette) 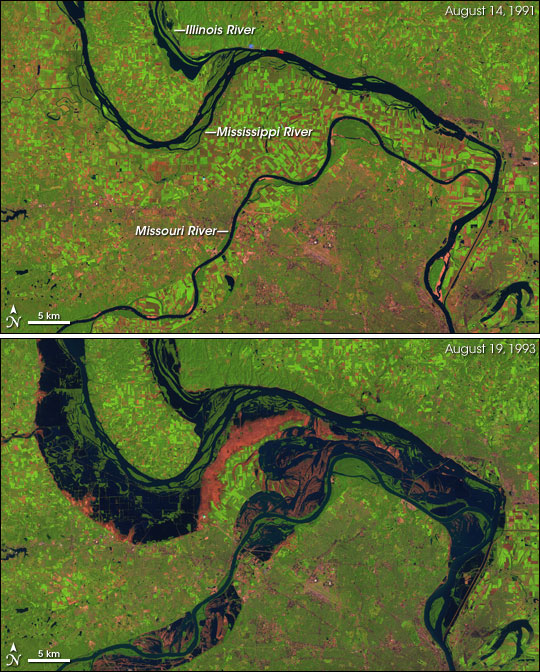 The satellite images show the Mississippi River, the Missouri River and the Illinois River near normal in 1991 and near their peak water levels in 1993. (Images/NASA)