After a warmer-than-normal summer for much of the United Kingdom, mild air will continue into the autumn season.

September and October will welcome continued warmth across the whole of the U.K., alongside prolonged periods of dry weather.

AccuWeather Meteorologist Tyler Roys said: “Overall, for the three-month period, the average temperature will be about 1-2 C above normal." 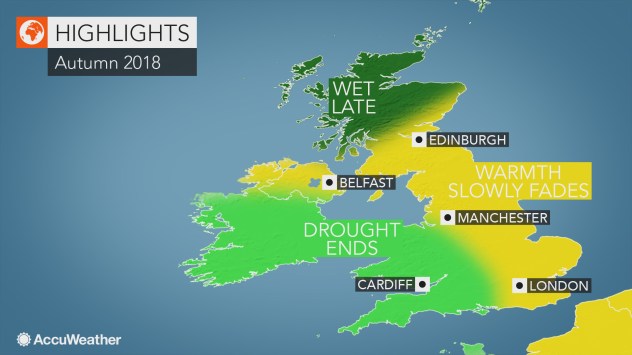 “Most likely, two of the three months will run 2-3 C above normal.”

Residents and visitors will be able to toss aside brollies for a bit longer this year and spend more time outdoors.

It’s not all good news for nature lovers, though.

The dry and warm conditions experienced over the summer may cause leaves to fall early and before they change colour, leading to a less-than-impressive foliage season.

By November, a more traditional stormy pattern will settle in across the British isles.

Roys said: “This will kick start the end of the drought, especially in Wales and western England.

“As the stormy pattern returns, the storm track will become closer to the United Kingdom, which will allow much of northern Scotland to become wet.”

Forecasters are not predicting fewer storms than normal this year; however, most of the activity will arrive during the winter and early spring — rather than during autumn.

“At most, a few storms will impact the Isles,” he said.

“The active period this season will be farther south, with storms resulting from the remains of tropical systems.”

After a very dry summer, it’s unlikely that the precipitation they bring with them will be substantial enough to lift rainfall totals back to normal.

This deficit could lead to a shortage of certain produce or rising prices if yields are lower than average.