10 health dangers that could harm your pet this summer

While summertime staples like fireworks and backyard barbecues are enjoyable for most families, pet owners should know the serious health risks that some warm-weather activities can pose.

Keeping animals comfortable as temperatures rise will help prevent one of the most serious dangers: life-threatening heat stroke.

“Not everyone is aware of how quickly a dog or cat could react to overheating,” said Doctor of Veterinary Medicine (DVM) and Certified Veterinary Acupuncturist (CVA) Jeffrey Levy. “[It’s] a silent killer.”

Even just a few minutes of leaving a pet alone in a vehicle can be deadly.

Heat can soar to sweltering levels of more than 140 F, according to Brian Rooney, DVM.

“Temperatures can go up by 10 degrees in about 10 minutes, even when the windows are left open,” Rooney said.

Pet owners in some states can face hefty fines, jail time or both, according to Michigan State University’s Animal Legal and Historical Center. 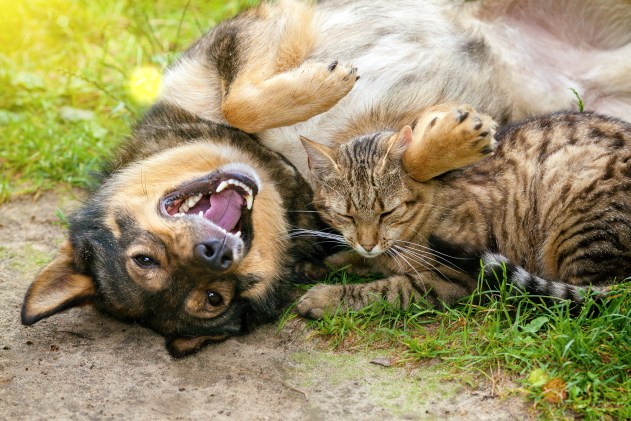 Brachycephalic, or short-nosed, dog breeds including bulldogs and pugs are especially susceptible to overheating while outside with limited water or shade, Rooney said.

“If it feels too hot [for your bare feet], it is definitely too hot for your pet to walk safely on,” said Rachel Barrack, DVM, CVA and certified veterinary Chinese herbalist (CVCH) of Animal Acupuncture in New York City.

Ceramic or steel bowls, especially with added ice, will keep the pet’s drinking water chilled for longer, according to Levy.

A refreshing run through sprinklers and a rest on cool floors, such as bathroom tiles, can also keep pets comfortable, Levy said.

According to Levy, grapes should be avoided as they are toxic to cats and dogs.

Beneath a pet’s fur is vulnerable skin that requires sun protection similar to that of humans.

Pet owners can use human-formulated sunscreens while keeping in mind that pets may be tempted to lick them off.

“Eating these products can cause bloody diarrhea and vomit,” Barrack said.

Alternatively, there some commercial sunscreens available that are formulated specifically for pets.

How to avoid getting bitten by a tick

According to the Centers for Disease Control and Prevention (CDC), the disease is spread through an infected animal’s urine.

The CDC stated that leptospirosis can also enter a pet’s body through the eyes, nose, mouth and broken skin.

Though leptospirosis can impact a dog’s kidneys and liver, there is a vaccine to prevent it, said Rooney.

Mosquitoes and other pesky pests

Pets will face threats from bugs including mosquitoes and fleas during summer.

They can be vulnerable to heartworms, which are spread through mosquito bites, according to the U.S. Food and Drug Administration (FDA).

The FDA reported that the parasitic worms can cause severe lung disease, heart failure and even death in dogs, cats and ferrets.

“It’s important to keep your pets on heartworm, flea and tick preventatives year-round, but it’s especially important in the warmer months when more bugs are prevalent,” said Barrack.

Levy advised that after every walk, pet owners should check for fleas and ticks in areas including around the eyes or the tips of ears.

“Fleas can be found in the belly and at the base of the tail,” he said.

“A lot of times, I’ll be driving and I'll see a dog with its head out the window and tongue and ears flapping,” he said.

Rooney also said that usually near the end of summer, pets are at risk of being stung by wasps and yellow jackets.

Because not all dogs are natural swimmers, pets should never play in the water unattended, said Barrack.

She advised that dogs wear life preservers until the owner is confident in their swimming abilities.

Levy advised that owners check for waterlogged ears after each swim. If using cotton to protect their ears, Levy said, be sure to remove it afterwards.

“Dogs are very prone to ear infections when they swim,” he said.

Below are five additional summer health threats of which pet owners might not be aware: 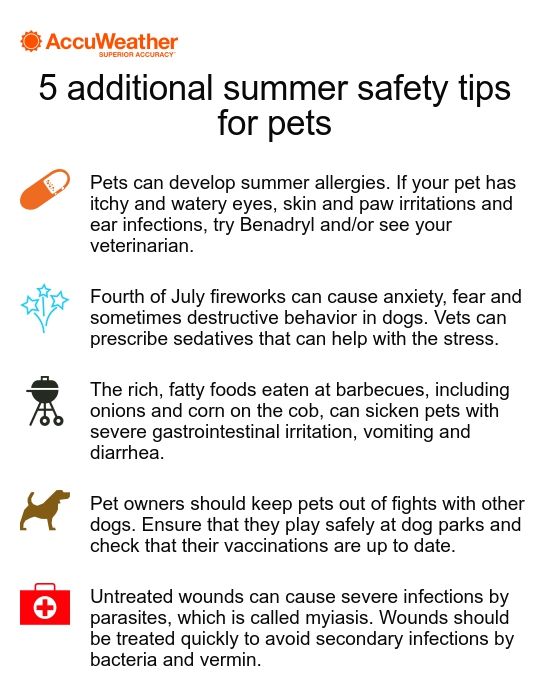