Health experts are encouraging people to pick lighter colored face masks made of cotton for the hot and humid summer months.

As the calendar flips from June to July, temperatures will be soaring across the Plains states, with some cities hitting the triple-digit mark for the first time this season.

The extended nature of the heat may put a strain on budgets due to high cooling demands and can be dangerous for those spending time outdoors if proper precautions are not taken.

The core of 100-degree-Fahrenheit heat will shift slightly eastward toward Wichita, Kansas, and Oklahoma City into Wednesday. This would be the first time either city has hit the century mark this year, and Oklahoma City may even come close to Wednesday's daily record of 103 F set in 1917.

High temperatures in the middle to upper 90s will be felt elsewhere across the south-central Plains into the middle of the week, but even in these areas where thermometers fail to crack 100, AccuWeather RealFeel® Temperatures are likely to be in the lower to middle 100s during the afternoon hours.

Precautions will need to be taken for those spending any length of time outdoors in the sizzling conditions to lower the risk of heat-related illnesses. If you must be outside, take frequent breaks in the shade and drink plenty of water to avoid dehydration, heat exhaustion or heat stroke.

Use caution when touching door handles or steering wheels as they could become hot enough to cause a minor burn, and avoid playgrounds directly in the sun during the afternoon hours.

Never leave a child or pet in a locked vehicle even with the windows cracked as the temperature can climb to lethal levels in minutes.

Gusty winds quickly fanned the flames of a wildfire sparked by fireworks in Utah
4th of July eclipse to kick off busy month for astronomy
Heat exhaustion vs. heatstroke: What are the warning signs and how should you react?

Gusty winds will create an elevated fire danger across the southern Plains. Residents are encouraged to avoid the use of outdoor flames, power equipment or fireworks.

Farther north, temperatures in the 90s and even close to 100 that were experienced across the northern Plains on Monday will be replaced with 80s into Wednesday in the wake of severe thunderstorms.

However, forecasters say an area of high pressure will build northward across the center of the country later this week, causing temperatures to soar once again. 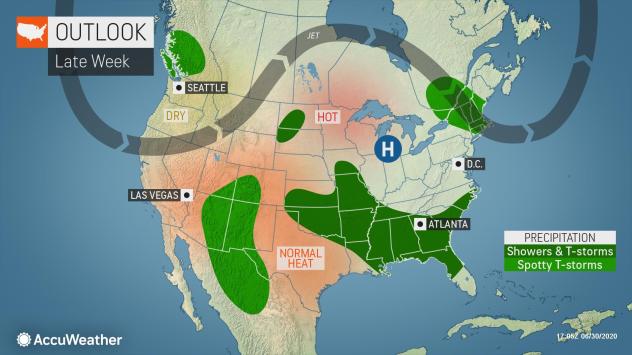 "Just in time for July Fourth celebrating, the heat across the western Plains will expand into the northern Plains and the Ohio Valley later this week," AccuWeather Meteorologist Tyler Roys said.

Highs are likely to trend upward into the lower to middle 90s during Friday and July Fourth around Minneapolis, with AccuWeather RealFeel® Temperatures near 100. Similar temperature readings may be reached around Chicago, Indianapolis and Cincinnati for the holiday weekend.

While such temperatures are not record levels for these metro areas, record highs may be broken farther north Friday and Saturday, including around Duluth and International Falls, Minnesota. Here, temperatures are forecast to be 15 degrees above average in the lower 90s.

For example, the record high in International Falls on Friday is 90 degrees. The current forecast for that day is 92 degrees. While the city is commonly referred to as the "Icebox of the Nation" during the winter months, it will be anything but that on Friday and Saturday.

In addition to the surging heat, the overall trend in the weather pattern heading into the July Fourth weekend will be drier across the North Central states, when compared to the rounds of showers and thunderstorms expected to fire up daily into the middle of the week.