The North American monsoon will fuel showers and thunderstorms over Southern California in the coming days, but the storms could bring added dangers to the drought-stricken landscape.

An uptick in moisture related to the North American monsoon might be enough to bring rain to drought-stricken Southern California through the end of the week.

An uptick in moisture related to the North American monsoon might be enough to bring general thunderstorms to interior Southern California in the coming days with the potential that coastal areas from the Mexico border to the mountains north of Los Angeles get their first shower or thunderstorm since May or June, AccuWeather meteorologists say.

Rain along the Southern California coast is rare during the summer and early autumn, but the weather pattern may send some rain to the region by next week. The anticipated widely separated thunderstorm activity is highly unlikely to impact the long-term drought, but some roads may become slick, and flash flooding could visit some communities well inland, forecasters warn.

The last measurable rain in Downtown Los Angeles was on June 22, the first full day of astronomical summer, when a mere 0.01 of an inch of rain fell. Parts of the Southern California coast have not had anything more than a few drops of rain since the spring. The last general soaker in the Los Angeles area was on April 21-22, when 0.10 to 0.50 of an inch of rain fell. 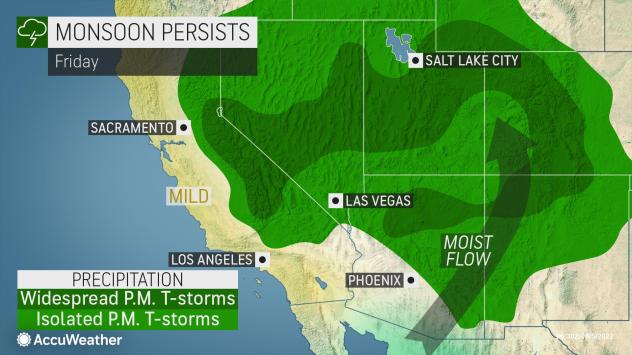 Farther south along the California coast, San Diego picked up 0.02 of an inch of rain on May 20, which was barely enough to wet the ground. The last soaking rainfall for the San Diego area was way back on March 28-29, when around 0.70 of an inch accumulated in rain gauges in the city.

"At this time, there is nothing to indicate that a thorough soaking is coming to San Diego, Los Angeles and other coastal cities and towns in the region over the next five to seven days," AccuWeather Senior Meteorologist Heather Zehr said.

Satellite images on Thursday revealed that a disturbance was pivoting northwestward from Arizona. 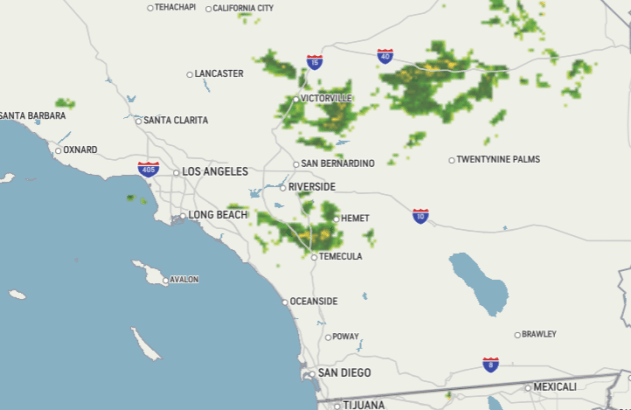 This radar snapshot from Friday morning, Aug. 5, 2022, revealed spotty showers and thunderstorms, mainly over the interior of Southern California.

As the disturbance drifted northwestward during Thursday night and Friday morning, the extra moisture led to shower and thunderstorm activity over interior Southern California, southern Nevada and western Arizona. A few drops of rain managed to fall on some coastal communities between San Diego and Los Angeles.

Slightly drier air in the wake of the disturbance should lead to fewer clouds and may suspend thunderstorm activity from Friday afternoon to Saturday over the region, with a few exceptions.

But, on Monday, and perhaps starting as soon as Sunday or Sunday night, another surge in moisture is foreseen and could be bigger in terms of impacts compared to Wednesday night and Thursday. 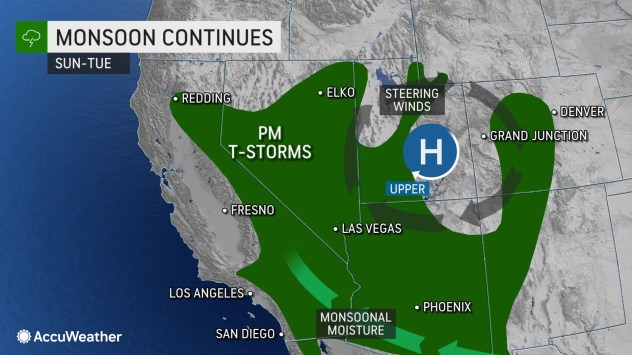 "By far, most of the shower and thunderstorm activity will occur from the mountains and deserts west of San Diego and Los Angeles to the southern Sierra Nevada and in the states of Arizona and Nevada in general from late this week through early next week," AccuWeather Senior Meteorologist Brett Anderson added.

There is the potential for pockets of 0.25 to 0.50 of an inch of rain over interior Southern California with highly localized amounts of 1-2 inches through next Tuesday as the moisture associated with the monsoon surges and wanes a few times.

Not enough rain is likely to fall even in the most drenching downpours to create widespread runoff and have a significant impact on building drought conditions in Southern California. Close to 98% of California is considered to be in severe drought or worse with only the northwestern tip of the state deemed abnormally dry, according to the United States Drought Monitor.

Palm Springs and Victorville, California, are among the communities that are likely to have multiple opportunities for thunderstorm downpours into early next week. Despite a few thunderstorms in the area around Palm Springs so far this summer, there has been no measurable rain since June 22, when 0.03 of an inch fell.

Along with the chances of downpours that can bring a brief soaking to mountain and desert communities, there is also the risk of highly localized flash flooding. Thunderstorms associated with the 2022 North American monsoon season have already triggered flash flooding in the metro areas of Phoenix, Flagstaff and Tucson, Arizona, as well as Las Vegas in recent weeks.

The risk of flash flooding and associated mudslides will be greatest, but not limited to recent burn scar locations in portions of Southern California.

In Los Angeles and San Diego, the risk of flash flooding on Monday, when the highest chance of a thunderstorm exists, is extremely small at this time. However, where it manages to rain a little, road surfaces can be extra slick due to the moisture and buildup of oil from vehicles during the summer and late spring. There has been no appreciable rain to wash away the oily substances.

Along with the uptick in downpours over interior Southern California, will also be the risk of thunderstorms that produce very little or no rainfall. Lightning and gusty winds associated with the storms could spark new wildfires.

While the cause of the state's largest active blaze, the deadly McKinney Fire, was still under investigation, lightning remains a possible ignition source. Storms were in the vicinity of Northern California and southern Oregon around when the fire is believed to have started during the afternoon of July 29, AccuWeather Meteorologist Ryan Adamson said. As of Thursday, the fire in the northern tier of California had consumed 58,600 acres with just 10% containment, according to the national Incident Information System and Cal Fire.