When will stretch of 90-degree temperatures end in the Twin Cities?

It's officially been over a week straight of temperatures at 90 or above in Minneapolis as the city was gripped by a historic heat wave.

On Wednesday, June 9, Minneapolis broke a daily record by one degree, reaching 96 F in the afternoon.

"As we hit noon, the Twin Cities is now up to their 7th consecutive day with a high of 90 or greater," the National Weather Service (NWS) said on Twitter Wednesday.

The long stretch of 90s began in Minneapolis on June 3, over two weeks before the official start of summer on June 20. The city then set a new temperature record on June 4 by rising to a sizzling 97 F. 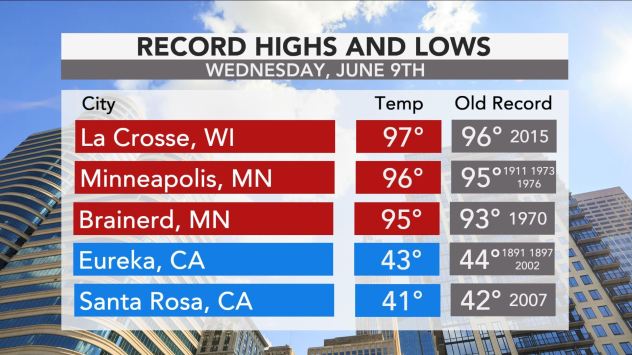 The heat peaked on June 5 with a record high of 99 F, a whopping 23 degrees above average for early June in the city. The city usually sits in the mid-70s at this time of the year.

The Minnesota Department of Natural Resources noted that this heat wave is historic not only for its duration but also for the intensity of the heat so early in the season in the state.

Minneapolis and St. Paul, Minnesota, have now had the earliest seven-day period of consecutive temperatures at 90 degrees or above on record, according to the NWS.

Temperatures on Thursday reached 97 degrees, just two degrees away from tying with the 1956 high temperature record. And while cloud cover nearly dimmed their chances, temperatures on Friday just reached 90 degrees, making for nine consecutive days with highs of 90 or greater. This is the first time the cities have seen a streak of nine days with 90-degree temperatures since 2006, according to the NWS.

The year 1933 holds the longest streak of 90-degree temperatures in June for the cities at 17 days.

Minneapolis isn't the only city dealing with extreme heat this June. Duluth, Minnesota, also broke a couple of records on June 4 and 5 with highs at 94 both days. International Falls, Minnesota, soared to 98 F on June 4, setting a new record as well. 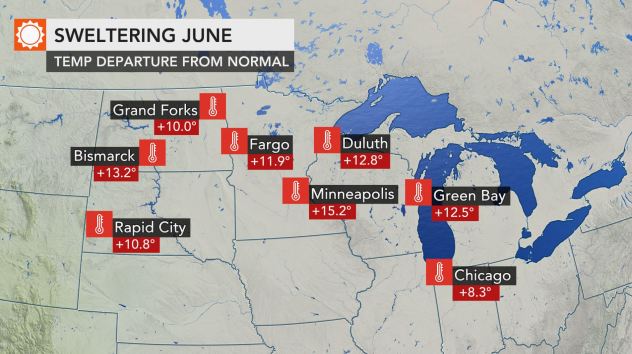 The heat originated from southerly flow that developed between an area of low pressure over the Rockies, and a large area of high pressure in the southeastern U.S., according to the Minnesota State Climatology office.

Minneapolis is expected to break its streak of 90-degree heat this weekend, but this cooldown can hardly be considered relief as temperatures remain well above average across the area.

"High temperatures are forecast to remain in the upper 80s on Saturday, or about 10 degrees above normal," AccuWeather Meteorologist Renee Duff said.

Even at night, temperatures will rarely dip within 5 degrees of average, staying in the 60s and 70s. Generally, Minneapolis has low temperatures in the 50s in early June.

Temperatures are forecast to return to sweat-inducing levels, however.

This next burst of heat will begin at the end of the weekend, when Minneapolis is anticipated to reach the lower to middle 90s Sunday. 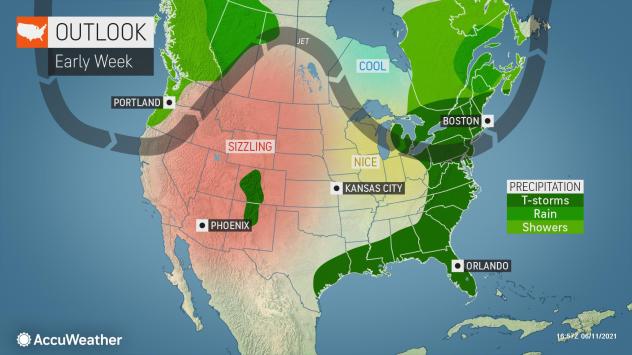 "Temperatures will surge across the Dakotas and Nebraska with high temperatures back into the 90s, perhaps close to 100 degrees once again," AccuWeather Lead Long-Range Meteorologist Paul Pastelok said.

Though Minneapolis isn't forecast to break any more records, above-average heat will continue to dominate the Midwest. Residents are urged to stay hydrated, stay out of the sun and take precautions to avoid heat exhaustion.