As you enjoy a day at the beach or time in the park this summer, make sure to protect your skin from the sun’s harmful effects.

Temperatures have already been on the rise since late last week across much of the southeastern U.S. AccuWeather forecasters say it's just the beginning as much of this week will feature mid-summer heat and humidity, some of which could break some daily records for late May.

As a slow-moving storm brought cold air and snow to parts of the West and severe storms in the Plains over the weekend, heat has been pumped into much of the eastern U.S. As high pressure remains over the area this week, the heat will persist, leading to a full-fledged heat wave. High temperatures will climb well into the 90s and some communities will challenge daily high temperature records for late-May. A few hot spots may approach the 100-degree mark.

"The heat will challenge daily record highs for several days in a row in cities such as Charlotte and Raleigh, North Carolina, with afternoon highs around or even slightly above what they normally peak at in July or August," said AccuWeather Senior Meteorologist Dan Pydynowski.

Places like Savanah and Atlanta, Georgia, and Nashville, Tennessee, will also be in the midst of the heat wave through much of the week. 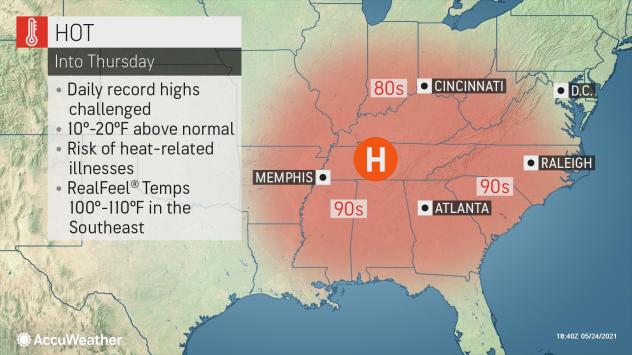 For many, the heat will peak Wednesday and Thursday, bringing the greatest chance for temperatures to break daily record highs. However, a bit farther northwest, from Nashville into the Ohio Valley, Tuesday and Wednesday are expected to be the hottest days before the heat is trimmed.

On Wednesday, Raleigh is expected to challenge their record high for that day of 94 set just a couple of years ago in 2019. Thursday is forecast to be one of the hottest days of the week in Atlanta, when the record high of 95 will be challenged set way back in 1916.

Columbia, South Carolina, could challenge records through Friday. The city came to within a couple of degrees of tying the record of 98 set in 1953 on Monday. The records to beat are 101 on Tuesday, 100 on Wednesday, 99 on Thursday and 101 on Friday. Columbia is currently forecast to reach well into the 90s for much of the balance of the week.

As the actual temperatures will soar this week, AccuWeather RealFeel® Temperatures will climb even higher, adding to the heat, as well as the hazards that can come from it. 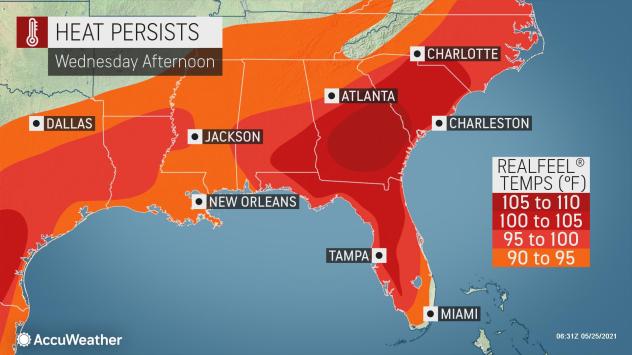 “While temperatures will resemble mid-summer, and humidity will increase some, humidity will still remain relatively low compared to mid-summer. This will help keep RealFeel® Temperatures from climbing even higher, but those spending time outdoors will still need to be careful to protect against heat-related illness,” Pydynowski said.

Those who will be spending time outdoors when the heat is most intense, from the late morning to mid-afternoon hours, will want to make sure to take necessary precautions like staying well hydrated, taking frequent breaks, staying in shaded areas as much as possible as well as using proper protection to prevent sunburn.

The UV index will be very high (UV index of 8 to 10) to even extreme (UV index of 11+) for some. At these levels, damage to exposed and unprotected skin can occur in as little as 10 to 15 minutes of exposure during the middle of the day when the sun is highest.

Many are aware of the frequent warnings during heat waves of heat-related illnesses such as heat exhaustion and heatstroke. However, not taking proper precautions against sun exposure can also lead to conditions such as sun poisoning.

Experts share nutrition tips for reducing heat illness risk among youth athletes
Heat exhaustion vs. heatstroke: What are the warning signs and how should you react?
5 foods to help you beat the heat
5 hidden dangers summer can pose to pets

"Most in the Southeast are no stranger to heat, humidity, blazing sunshine and the risks that accompany them this time of the year, but it's always good to refresh that knowledge and be prepared before doing that yardwork or heading to the pool or beach early on in the season," Pydynowski stated.

Mostly dry weather is forecast to accompany the heat as well, and while this is great news for those eager to cool off at a local lake or the beach, AccuWeather meteorologists are concerned about the length of the dry spell and a danger this could bring.

"This length of dry weather in the Southeast could bring back the threat of brush fires for a short period of time [this week]," AccuWeather Lead Long-Range Meteorologist Paul Pastelok said. 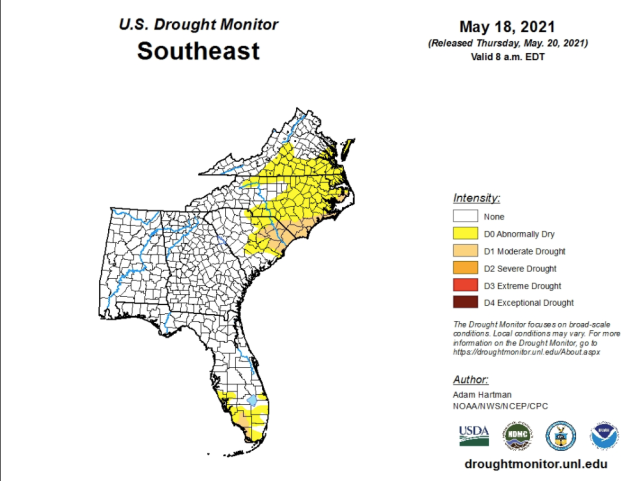 Abnormally dry-to-moderate drought conditions are currently ongoing in the eastern Carolinas and South Florida, according to the United States Drought Monitor.

So when will the heat ease? AccuWeather meteorologists say it depends on where you are. Farther north, places like Nashville to Raleigh will see temperatures dip to closer-to-normal levels toward the end of the week.

Farther south, it may take until later during the upcoming holiday weekend until temperatures are finally trimmed back closer to normal.

"For many areas of the interior South, the weekend cooldown is likely to be substantial with temperatures forecast to be slashed by 10-20 degrees," AccuWeather Senior Meteorologist Alex Sosnowski said.

"Following the blistering heat and building humidity from much of the week, the weekend may feel downright delightful for many," Sosnowski added.

Closer to the southern Atlantic coast, places like Charleston, South Carolina, and Savannah and Macon, Georgia, may see high temperatures stay several degrees above normal each day until Sunday or Memorial Day.