Heat advisories are in effect for what has become the first official heat wave of the season so far for several major cities.

The most pronounced heat wave of the summer for the Northeast has already turned deadly, and it will ramp up in intensity this weekend as temperatures challenge record highs and close in on the 100-degree mark, AccuWeather meteorologists warn.

And in Newark, New Jersey, triple-digit heat had already arrived earlier this week and has stuck around, with the mercury maxing out at 100 degrees on Friday afternoon, according to an initial reading recorded by the National Weather Service (NWS), the third day in a row the high temperature reached that mark there.

At least one death was attributed to the heat in Pennsylvania this week. On Thursday, officials in the eastern city of Allentown said a 73-year-old man had become the city's first heat-related death, NBC10 Philadelphia reported. The Lehigh County Coroner's Office said that the man “suffered from excessive heat exposure, complicated by underlying medical conditions,” according to NBC10.

Heat advisories were in effect throughout parts of the Interstate 95 corridor, including Philadelphia, New York City and Boston, on Friday. These advisories persisted on Saturday, with a smaller area from Wilmington, Delaware, to Trenton, New Jersey, placed under an excessive heat warning.

Before this current stretch of hot weather, much of the Northeast had not experienced long-duration heat this summer despite a large zone of sweltering conditions farther west and south.

In the Northeast, meteorologists have typically defined a heat wave as at least three consecutive days on which high temperatures reach 90 F or greater, a stretch that is impactful to Northerners but might be less of a disruption for people in Southern states. Such lengthy stretches of 90 degrees or higher are less common in the summer in the Northeast than compared to other parts of the U.S. like the South Central states or Southeast, which are also dealing with searing conditions this week. 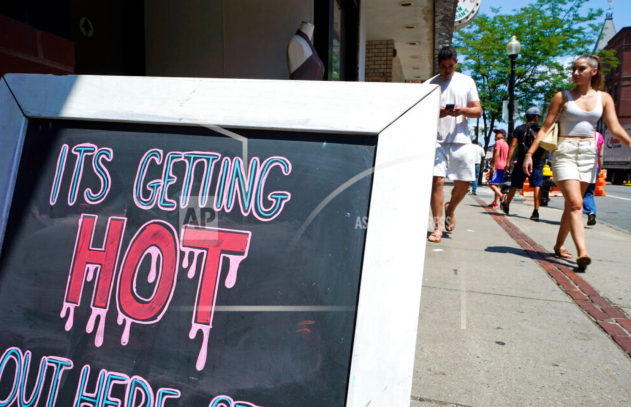 With temperatures hovering in the mid-90s, people walk near a sign down Hanover Street in the North End, during a summer heat wave, Thursday, July 21, 2022, in Boston.

New York City is among a number of locations that will easily reach heat wave status. The Big Apple will tally a seven-day stretch of 90-degree heat or higher through Monday and this current heat wave is likely to join a relatively short list of heat waves of equal duration or longer. The last time there was a heat wave of equal duration was in 2002, when highs were in the 90s from Aug. 11-19. The longest heat wave on record for New York City's Central Park observation site stands at 12 days from Aug. 24 to Sept. 4. 1953.

Meanwhile, just across the Hudson River in Newark, New Jersey, at least an eight-day heat wave is forecast.

The 100-degree reading there on Friday made it three days in a row of triple-digit high temperatures in Newark and that streak extended to four days on Saturday when the city recorded a high of 101 degrees. Dan DePodwin, Director of Forecast Operations for AccuWeather. DePodwin said that the AccuWeather forecasting department believes Newark will hit the century mark again on Sunday.

Farther south, Philadelphia is also likely to end up with at least an eight-day stretch with highs of 90 or better. After reaching the upper 90s on Saturday, temperatures could hit the 100-degree mark on Sunday, July 24, which would break the daily record of 98 set in 2011. The stretch of temperatures in the 90s may continue into Monday as well, with a high of 93 F forecast for the city.

Amtrak on Friday alerted commuters that there could be delays on its Northeast corridor rails due to the heat and that heat-related speed restrictions had been put into effect on tracks connecting Philadelphia and New York City. 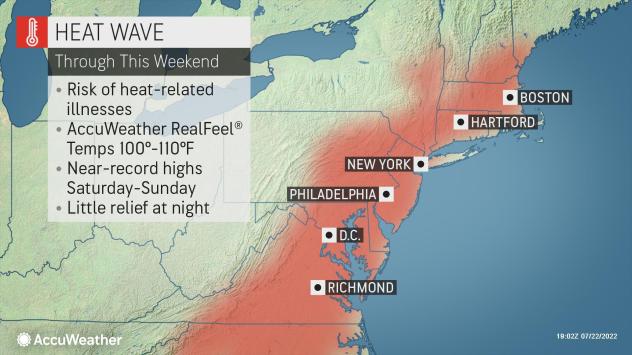 There is a growing list of locations, numbering at least two dozen or more in the Northeast alone, that could set daily high-temperature records on July 24. Records highs could be toppled in locations such as the Poconos, upstate New York and northern New England, as well as the heavily populated I-95 corridor.

The heat wave will continue to expand across New England. In Boston, a record that has stood since the Depression Era in 1933 could be challenged on Sunday. A high of 96 is forecast and the current record is 98 degrees Fahrenheit.

Scorching heat will be felt across the interior Northeast, including in the mountains. At Mount Pocono, Pennsylvania, Sunday's record of 91, which is currently forecast to be tied this weekend, dates back to the days just prior to the start of World War I in 1914.

Farther south, in Baltimore, there have already been 25 days with highs of 90 or better since the middle of May. That's the most of any city so far this year from northern Virginia to Massachusetts, AccuWeather forecasters say. While temperatures in the 90s in Baltimore are not abnormal on their own, this weekend's heat will take that to a much more scorching level.

The Charm City has already tallied five heat waves, but the ongoing warm stretch is currently the longest this summer at five days in a row, as the mercury climbed to 96 degrees on Friday. Baltimore soared past 95 on Saturday and Sunday is forecast to reach 100. 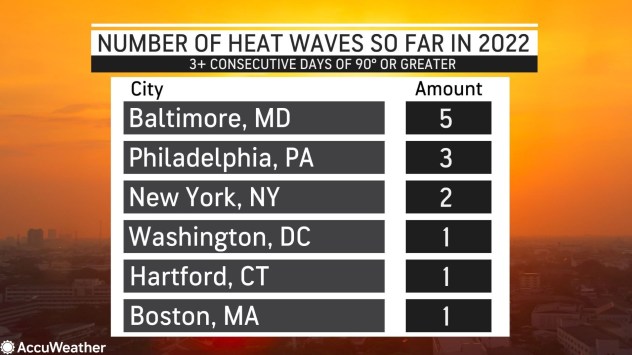 The nation's capital finally notched its first heat wave of the summer on Wednesday and is forecast to string eight days in a row with highs of 90 or greater through Monday at Reagan National Airport. The airport, located in Virginia on the western shores of the Potomac River, is the official reporting station for the District of Columbia. A high of 95 was recorded for Saturday with a high just shy of the record of 101 from 2010 forecast on Sunday.

When prolonged heat, including AccuWeather RealFeel® Temperatures of 100 degrees or higher, continues in major cities with large urban areas with vast amounts of pavement, concrete and brick, the heat often does not dissipate quickly. Instead, these surfaces tend to give off heat through the night, in a process known as the urban heat island effect. High humidity that often accompanies the heat along the Eastern Seaboard makes matters worse. 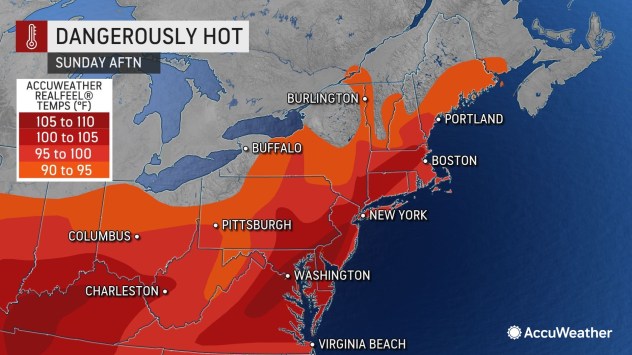 For this reason, a long-term heat wave, like the one underway across the I-95 corridor, can lead to a significant amount of casualties related to dehydration, heat exhaustion and potentially deadly heat stroke. Those experiencing homelessness, partaking in vigorous exercise, or performing manual labor are among the highest risk individuals for heat-related illnesses, experts warn.

At peak, more than 160 million people in the U.S. will experience AccuWeather RealFeel® Temperatures of 100 F or greater on Sunday. While an AccuWeather RealFeel® Temperature that high during late July may not be all that unusual for most places, especially across the Southern states and in the deserts, the fact that it will occur over such a large swath which includes the Northeast at the same time is uncommon, experts say. 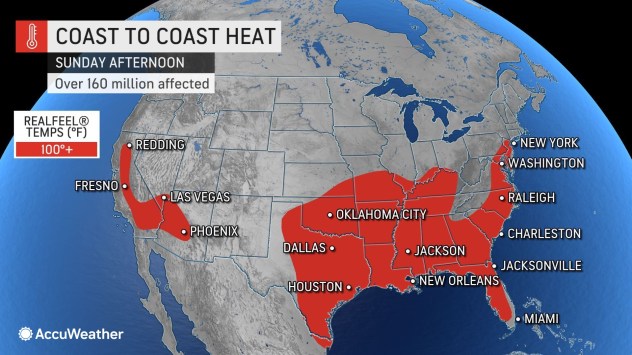 The I-95 zone of the Northeast has been experiencing AccuWeather RealFeel® Temperatures near or above 100 since the middle of this week and will continue to do so into Monday. In some urban areas, AccuWeather RealFeel® Temperatures can approach 110 degrees for a time during the afternoon when factoring in the actual temperature, intense sunshine, high humidity and other conditions.

The same front poised to bring violent thunderstorms to parts of the Midwest through Saturday night will push across the Northeast on Monday. Thunderstorms, some of which could be strong, may reach the coast on Monday. Parts of New York, Pennsylvania and New England could be visited by spotty thunderstorms this weekend, but these may only bring temporary relief. 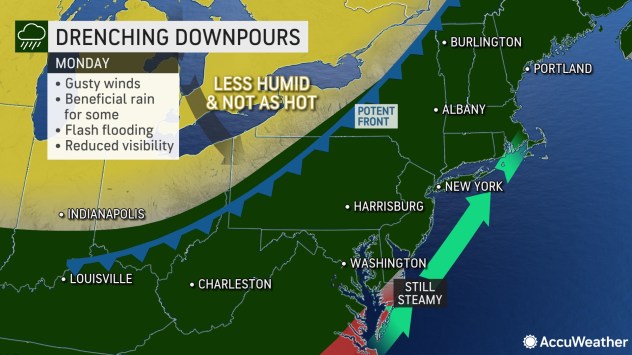 Even though no big blast of cool air will follow the upcoming front from the Midwest, temperatures may decline enough to break the string of 90-degree days from Boston to Washington, D.C., from Monday to Tuesday. A sight reduction in humidity levels by Tuesday may also be noticed by some individuals, especially over the interior of the Northeast.

However, temperatures and humidity levels are likely to creep back up, especially along the I-95 zone in the mid-Atlantic during the middle and latter part of this week, AccuWeather meteorologists say.