Near-freezing temperatures to break records in parts of the South

The coldest air of the season so far has the South in its grip and near-freezing temperatures could set new record lows across a wide swath of the region into midweek.

AccuWeather meteorologists have been tracking a powerful disturbance since last week as it swept out of Canada and into the central and eastern United States. While this storm continues to bring the first snowflakes of the season to parts of the Midwest and Northeast, areas farther south will be in line for a dose of cold air that some may not be accustomed to handling so early in the season. 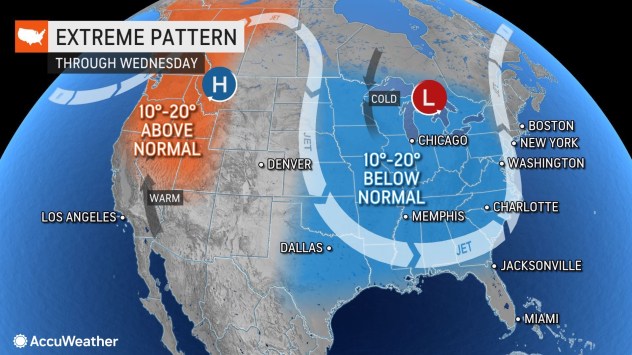 A shot of unseasonably cold air spread from the northern Plains to the Atlantic and Gulf coasts from Monday to Tuesday. Overnight lows are expected to be near- to below freezing through Wednesday night, summarized AccuWeather Meteorologist Joe Curtis.

The period through Thursday morning will be the most frigid in the South as residents of Nashville, Tennessee, and Birmingham, Alabama, will wake up to lows near or just below freezing each day.

On Tuesday, a cold front dipped southward and cooler weather extended to much of the Gulf coast from the Florida Panhandle to far eastern Texas. However, the most significant blast of chilly Canadian air will remain a bit farther inland and away from the warmer water of the Gulf of Mexico which will temper the extreme chill closer to the coast.

This round of wintry temperatures will be noteworthy for taking place so soon after a stretch of exceptional heat that blazed across some of the very same parts of the country around this time last month. Dozens of locations may challenge daily record lows in the upcoming mornings. 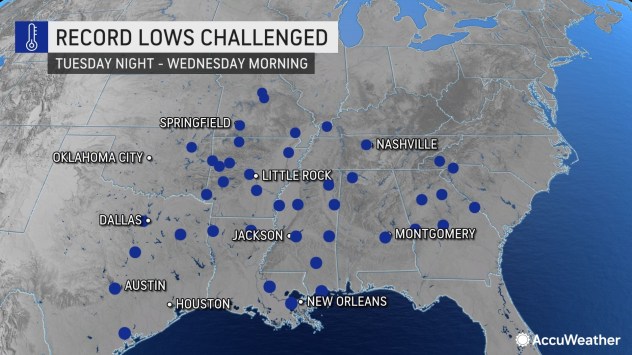 "To put this into perspective, many of these places had record-high temperatures in the upper 90s and lower 100s just under a month ago," added Curtis.

Indeed, Nashville set new daily record highs of 99 and 100 on Sept. 20 and 21, with the latter becoming that city's latest 100-degree Fahrenheit day on record by a full 10 days.

As the front progresses, the core of the winterlike chill will swing through cities like Jackson, Mississippi, and Baton Rouge, Louisiana. Both of those cities will exceed their daily record lows in the low 30s early Wednesday morning.

Closer to the Gulf Coast, in cities such as Mobile, Alabama, and Tallahassee, Florida, warm waters will help moderate the air by a few degrees, and temperatures are likely to remain above the freezing mark as a result. However, low temperatures in the mid to upper 30s are currently forecast for both cities, which could threaten daily record lows in both locations. 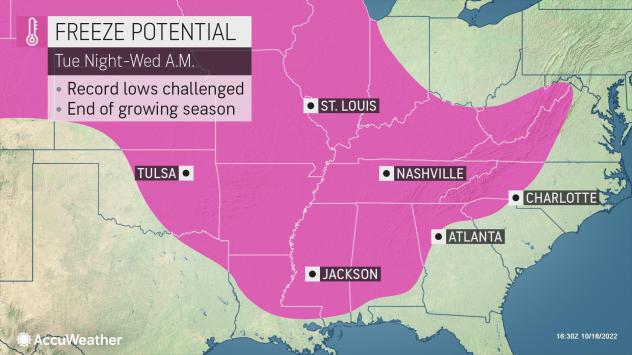 The freezing temperatures could come at a price as any late-season crops risk being damaged, especially in areas where farmers are simply not used to having to protect their crops from a freeze at this point in the year, according to AccuWeather meteorologists. Anyone on the fringes of the freezing temperatures with sensitive outdoor vegetation may also want to take precautions during this event, such as covering plants or bringing them indoors if possible.

As the broad disturbance lifts into Canada and the front pushes well off the coast, high pressure will build into the regions and temperatures will rebound several degrees by Thursday. The warming will accelerate late this week and this weekend with some areas potentially challenging record highs once again, AccuWeather meteorologists say.

Seattle, Portland amid record-setting warm spell
Slow-moving storm to bring rounds of rain to New Mexico, Texas
In the wake of Karl, what's next for the Atlantic?