Heat dome to keep the Central US sweltering throughout the week

Extreme heat will continue across the central U.S., challenging daily records and creating a high risk of heat-related illnesses.

Forecasts indicate that dangerous and record-challenging heat is expected for the remainder of the week in the south-central United States, AccuWeather meteorologists say, while parts of the Midwest can expect temperatures to ease slightly from triple-digit highs at times.

A tremendous dome of heat will continue to spin over the central U.S. this week like a giant wheel with the most persistent extreme temperatures centered over the southern Plains and lower Mississippi Valley region.

Within the core of the heat dome, temperatures will peak well into the 90s to near 100 degrees Fahrenheit in many places, while AccuWeather RealFeel® Temperatures will reach the 110s at times. At this level, there is a high risk of heat-related illness, and people are encouraged to avoid strenuous activity, drink plenty of fluids and seek an air-conditioned environment when possible, experts say.

The buildup of heat can make many urban areas unbearable at night without air conditioning because paved, concrete and brick surfaces give off heat absorbed throughout the day for many hours at night. 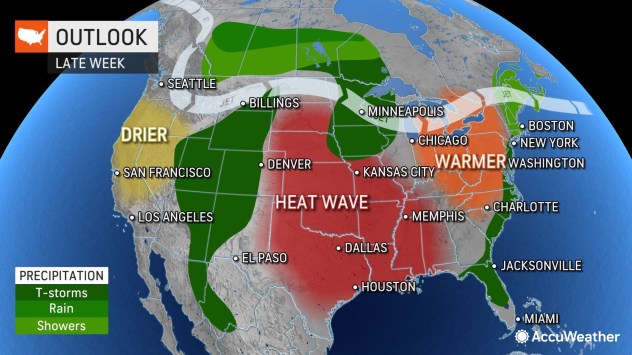 As the giant wheel of heat wobbled, a surge of 100-degree warmth shifted from the Dakotas on Sunday to Minnesota and northern Wisconsin on Monday.

Bismarck, North Dakota, hit 100 Sunday and smashed the old record of 97 set during the Depression Era in 1933. Fargo, North Dakota, tied its record of 101 Sunday, which was also set in 1933.

Temperatures hit 101 in Minneapolis Monday, breaking the old record of 98 from 1933 and hitting triple digits for the first time since 2018. With extreme heat in the forecast, the Minnesota Department of Transportation took to social media in recent days to warn motorists about the possibility of roads buckling under the harsh conditions.

International Falls, Minnesota, a place with a reputation as the icebox of the nation, was hotter than Miami, located 1,700 miles to the southeast, on Sunday and Monday. The high on Sunday in International Falls was 93 degrees, compared to 92 in Miami. On Monday, highs in the two cities were 92 and 89 degrees, respectively.

The second dangerous surge of heat in as many weeks will shift as the week progresses with the worst levels of both heat and humidity forecast into Wednesday in the Midwest, according to AccuWeather Senior Meteorologist Dean DeVore. This comes after much of the region had some relief from the extreme heat with high temperatures in the 80s and lower humidity over the past weekend. 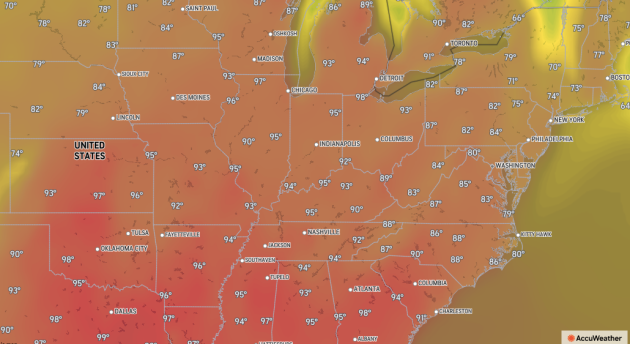 On Tuesday, the extreme heat produced temperatures in the upper 90s, rotating southeastward into much of Wisconsin, Illinois, Michigan, Indiana, Iowa and Missouri. At Chicago's O'Hare Airport, the record of 101 set during the blistering summer of 1988 was challenged but ultimately remained intact after Tuesday's temperatures rose to 99. The summer of 1988 ranks as one of the hottest on record for much of the central U.S.

Tuesday's record of 98 in Green Bay, Wisconsin, was also set in 1988. The record was also challenged, but not broken, with a high of 96 in the city. It was a similar story for St. Louis, where the record high of 99, also established in 1988, was nearly topped by Tuesday's high of 98.

The excessive heat will continue to migrate southeastward at midweek. On Wednesday, temperatures in Nashville could rival the record high of 100 set in 1988. A bit farther to the east in Charlotte, North Carolina, the daily record of 100 Wednesday was set more recently in 2015. In Atlanta, the record high of 98 set in 1964 will be challenged. 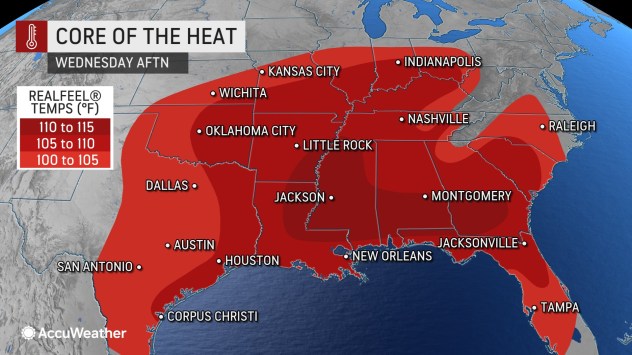 As the bubble of extreme heat moves off to the southeast, temperatures will throttle back a bit with the aid of showers and thunderstorms in parts of the Midwest as the week progresses.

In Minneapolis, the high temperature reached 90 on Tuesday and will trend down to the mid-80s Wednesday. After Tuesday's extreme heat, afternoon temperatures are forecast to hover in the mid-80s to near 90 in Chicago for the balance of the week.

Meanwhile, over much of the south-central region, little change in day-to-day temperature is anticipated through the weekend, which will keep the demand for energy high, forecasters say.

Many daily record highs over the South Central states will be just a bit out of reach in the pattern, with established records in most locations in the low 100s. However, high temperatures will still range from 5-15 degrees above average for the week.

Typical highs generally range from the low to middle 90s and will end up being within a few degrees of 100 each day in cities such as Dallas; Oklahoma City; Little Rock, Arkansas; and Shreveport, Louisiana.

The same bubble of intense heat is likely to rotate southwestward into the Mississippi Delta region toward the end of the week, and that could be enough to rival record highs. Even Gulf Coast cities such as New Orleans could record a 5- to 10-degree spike in high temperatures. The record highs of 101 set in 2009 and 97 set in 2016 could be challenged Friday and Saturday. 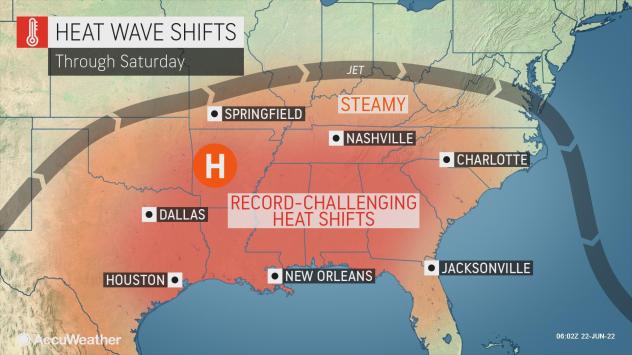 One-hundred-degree highs are forecast for Houston starting on Thursday and lasting through at least Sunday.

Another bubble of extreme may return to parts of the Plains and Midwest toward the end of the week.

A more substantial temperature decline may progress from late in the weekend to early next week over parts of the northern Plains and Upper Midwest, where highs may retreat to near average for a few days. However, no relief is in sight for much of the South Central states; most cool air and storms will be forced well to the west, north and east of the region.

For many portions of the northern and central Plains and Midwest so far this summer, there has been enough fluctuation in the heat to avoid long strings of days with record highs. The summers of 1953 and 1988 were brutal in this respect. There were many days in a row on which record highs were set and many of those temperature marks remain in the record books to this day.