A batch of chilly air more typical of early November will sweep into the North Central states during the second half of this week. Even hearty folks who have been holding off on the chilly-weather attire will likely be reaching for long sleeves, jackets, fleece and an extra blanket at night with the change in the weather pattern.

AccuWeather RealFeel® Temperatures are forecast to plunge into the 20s, 30s and 40s F over a broad area, especially during the early morning hours, Thursday and Friday in this cold snap. 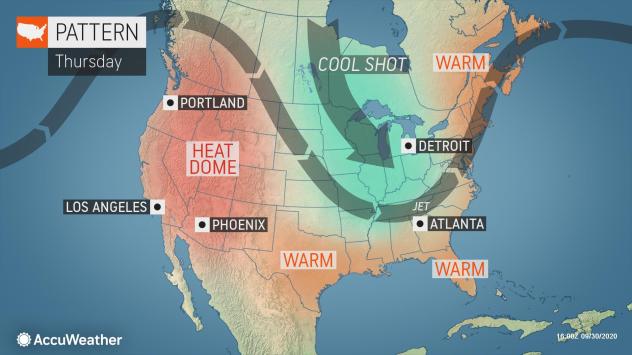 Forecasters say now may be the time to take out the air conditioners and make sure your heating system is ready to handle the chilly days ahead.

The first of two waves of cool air began to work southeastward across the central United States during Monday night, but the taste of November is on the way as the second blast of crisp air dives in. Chaotic weather conditions are anticipated for the Great Lakes region as the pattern flips.

Unlike the air that brought record-low temperatures to portions of the Plains and Midwest and snow to the Rockies earlier in September, breezy conditions and areas of clouds will tend to prevent temperatures from bottoming out as much at night. However, the areas of clouds, sporadic showers and gusty conditions will make it feel more chilly during the daytime. 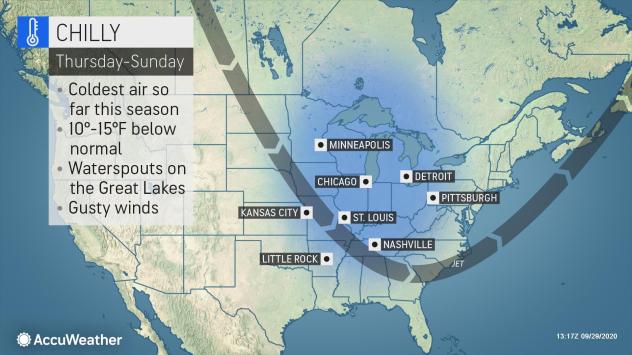 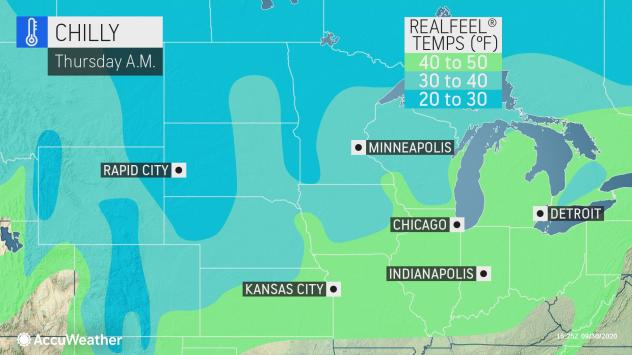 "RealFeel Temperatures may struggle to rise above the 40s during the daytime in cities such as Chicago," AccuWeather Senior Meteorologist Dan Pydynowski said.

Actual highs for a two- to three-day stretch will be in the 50s in Minneapolis, Chicago, Detroit and Pittsburgh with highs projected to be in the lower 60s in Cincinnati and St. Louis and the middle 60s in Nashville.

Typical highs for late September and early October range from near 60 over the northern tier to the upper 70s over the Tennessee Valley.

The nighttime breeze will push some cooler air from the countryside into urban areas so that cities such as Chicago, St. Louis, Cincinnati, Cleveland, Indianapolis and Kansas City, Missouri, experience their lowest temperatures of the season so far. However, the breeze may prevent a frost in most places during most nights into this weekend.

Lows will range from the lower 30s over the northern tier to the upper 30s and lower 40s around the Great Lakes to the middle 40s over the central portion of the Mississippi Valley and the Tennessee Valley.

Average lows for this time of the year range from the middle 30s over the northern tier to the middle 50s over the central part of the Mississippi Valley.

During Thursday and Friday, the action of the chilly air passing over the warm waters of the Great Lakes will cause moisture to bubble up into the atmosphere and trigger lake-effect clouds, showers and even the potential for waterspouts. 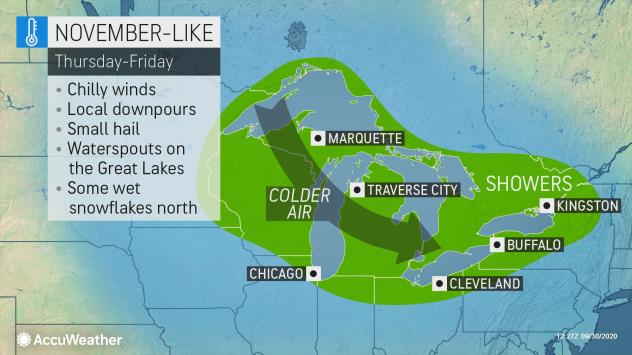 There can even be soft hail called graupel, which is the German word for sleet, but it is somewhat different from that type of wintry precipitation. Graupel forms when water freezes on wet snowflakes well above the ground and this mixture then survives the trip to the ground. In contrast, sleet forms as water droplets freeze solid before reaching the ground.

"With this blast of cold air, the first snowflakes of the season may fly across the Arrowhead of Minnesota into parts of the Upper Peninsula of Michigan and northern Wisconsin, inland away from the shore of Lake Superior on Thursday into Friday," according to Pydynowski.

As chilly as the air is forecast to be, it will not be accompanied by high winds that sometimes go along with early-season cold air. Breezy conditions will add chill to the air, but winds should not get strong enough to result in massive waves and major lakeshore flooding with this event. Winds will generally average 10-20 mph, which could create a moderate chop on exposed Great Lakes waters.

Where the sky manages to become clear and winds to drop off at night, there will be the potential of frost. However, that is more likely this weekend to the middle of next week when high pressure is able to settle over the region with drier air.

A weak storm may disrupt that dry weather from Sunday to Monday with patchy chilly rain and perhaps a dash of sleet or wet snowflakes in the coldest spots.

Much cooler air will also be heading to the Atlantic coast, but it will not pack the same punch as it will in the Midwest.