Relief is finally in sight for the oppressive heat wave that has been shattering records across northern New England and southeastern Canada, but the region must endure a couple more sweltering days early this week.

Temperatures once again soared into the upper 80s to middle 90s F (lower 30s C) on Tuesday in Ottawa, Montreal and Quebec City as well as Burlington, Vermont, and Caribou, Maine.

“It will also be noticeably more humid early this week than the first half of the heat wave,” AccuWeather Canadian Weather Expert Brett Anderson said. “AccuWeather RealFeel® Temperatures can be several degrees higher than actual temperatures.”

Residents will have to continue to take the necessary precautions to avoid heat-related illnesses as more records are expected fall and the wildfire danger will remain elevated.

An increase in thunderstorms into Wednesday will finally signal that an end to the heat wave is on the horizon.

The strongest of these thunderstorms can produce damaging winds and flooding downpours, including in cities such as Ottawa and Toronto.

“[Behind these thunderstorms], Wednesday will not be as hot nor as humid across Ontario and southwestern Quebec,” according to Anderson. However, he added that "the steamy air will linger farther east across the remainder of Quebec, northern New England and New Brunswick.”

High temperatures will be held below 90 F (32 C) across the latter region, but humidity will still be uncomfortable and fuel more thunderstorms.

AccuWeather meteorologists say the rain will be welcome for reasons besides trimming the heat.

“Any rain in this region will be beneficial as rainfall has been scarce over the past couple of months,” Anderson added.

These thunderstorms will finally mark an end to the sweltering heat across northern New England and Quebec. Temperatures may still climb a few degrees above normal later this week but not to the record levels amid the heat wave and the high humidity will be gone. 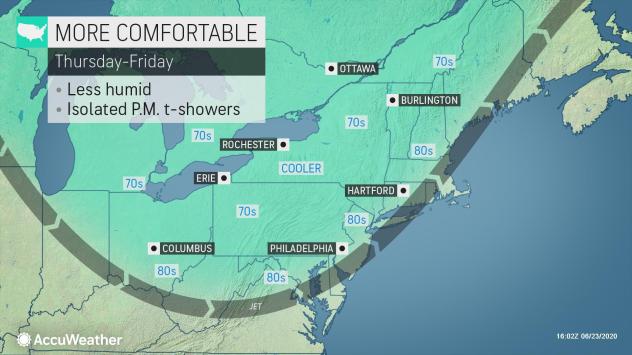 The sweep of less humid air may stop short of reaching the Canadian Maritimes. However, the sweltering weather being endured by the rest of southeastern Canada and northern New England will not spread to these provinces. The weather may just feel less comfortable in the Canadian Maritimes than across places farther inland.

The heat wave across southeastern Canada and northern New England has definitely been one for the record books. Many communities have broken record highs on multiple days.

Monday was the fourth out of five days that temperatures climbed past 90 F (32 C) and a daily record high was tied or set in Quebec City.

Monday marked the ninth day of highs at or above 86 F (30 C) in Montreal. The city averages 9.3 such days for an entire year, according to AccuWeather Forecasting Manager Dan DePodwin.

“Caribou and Burlington have already surpassed the average number of 90-degree Fahrenheit (32 C) days for an entire year, and summer officially just started on Saturday,” DePodwin stated. "Caribou and Burlington average 2.5 and 6.7, respectively, 90-degree days a year. Saturday marked the fifth day of highs at or above 90 F in Caribou, while Burlington registered its eighth such day on Monday." 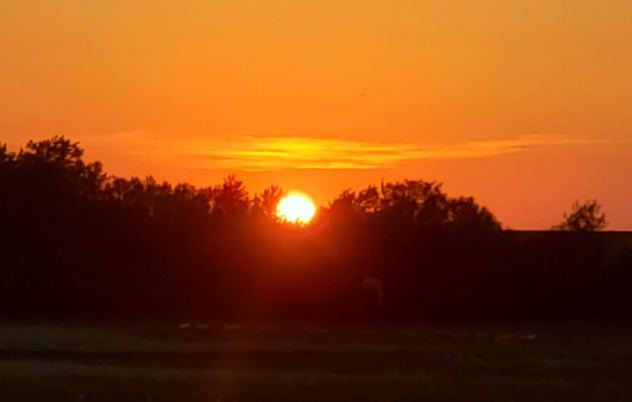 In fact, Burlington broke the record for the most consecutive 90-degree days in June. The previous record was four days from 1983, and this heat wave spanned five days on Monday.

That streak extended to six on Tuesday, putting this stretch in record books as the city’s second-longest streak of temperatures at or above 90 F for any month. The all-time record is eight consecutive 90-degree days from August 1944. Burlington set a record of 96 degrees on Tuesday, which easily surpassed the record of 93 degrees set way back in 1888 and tied in 1975.

Caribou, a northern city better known for piling up big snowfall totals during winter, tied its all-time high temperature on Friday when the mercury soared to 96 F (35.6 C). According to the National Weather Service (NWS), the last time temperatures soared this high was on May 22, 1977. The NWS noted that weather records in Caribou began in 1939, and therefore do not include all of the 20th century.

Multi-state severe weather threat to rock US
As temps soar this summer, here are some useful tips for wearing a mask and trying to stay cool
AccuWeather Summer Camp: Dogs want you to learn this surprising fact

“The heat wave from Friday to Sunday was the hottest three-day stretch of weather in Caribou since records began in 1939,” AccuWeather Senior Meteorologist Tom Kines explained.

Even though highs fell short of 90 F (32 C) on Sunday in Caribou, temperatures returned to that threshold on Tuesday when the mercury reached 92 degrees, breaking the record of 91 degrees set in 1975 and 1983. The city has already had six days at or above 90 degrees so far this year. Caribou has never had more than seven such days in a given year, which occurred in 1949, 1952 and 1995.

Lake Champlain in northern Vermont has even warmed to record levels – the temperature of the lake was 77 F (25 C) on Monday, marking the warmest the lake has ever been during June.

Also noteworthy, the heat wave across southeastern Canada and northern New England started before Atlanta registered its first 90-degree day of the year on Saturday – tying the record for the city’s third latest such occurrence.

Fires in Quebec continue to burn

Amid the heat wave, there are 19 wildfires burning across Quebec, according to the province’s forest fire prevention agency (SOPFEU). The largest remains uncontrolled and has burned more than 177,000 acres (72,000 hectares) north of Saguenay.

Crews are working to protect the Peribonka Hydro-Quebec station from the blaze. While the plant serves nearly 85,000 people in the region, a spokesperson told the Canadian Press that no customers should be affected. Hydroelectric power plants are connected within a network, preventing users from being impacted by the shutdown of one lone plant.

Officials shut down the Peribonka Hydro-Quebec station as a precaution.

“The boreal forests of Quebec, where this fire is burning, are no stranger to large, long-burning fires during the summer and early fall,” Anderson said. “However, this heat wave is kicking things off much earlier than normal.”