Desperate amid drought, archbishop prays for ‘gift of rain’ in Italy 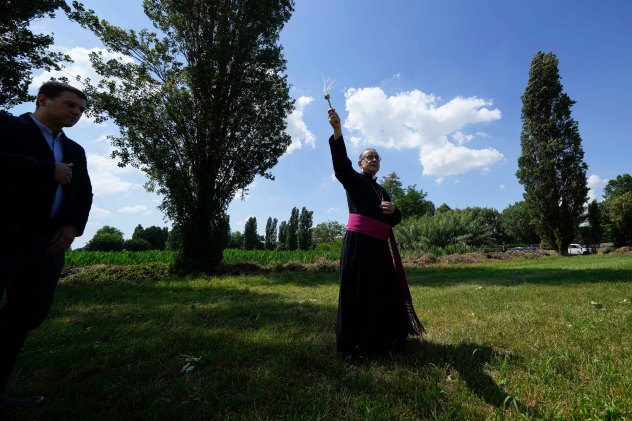 Archbishop Mario Delpini blesses a field with holy water in front of the San Martino Olearo in Mediglia, northern Italy, Saturday, June 25, 2022. Archbishop Mario Delpini made a pilgrimage to three churches Saturday to pray for "the gift of rain," visiting three churches on the outskirts of Milan that serve the farming community and reciting the Rosary. (AP Photo/Luca Bruno)

Already in the midst of a significant drought, a prolific heat wave has added insult to injury for residents across Italy. AccuWeather forecasters say the parched country recorded high temperatures this week that shattered all-time records.

The heat and drought are so significant that a state of emergency has been declared in one part of the country, and some religious leaders are praying for precipitation. Last Friday, Italy's Lombardy region declared a state of emergency as the heat wave began to take hold of the area, according to The Associated Press (AP). This declaration prompted the mayor of Milan, Giuseppe Sala, to sign an ordinance on Saturday to limit the city's use of water and energy.

All decorative fountains, except for those housing plants or animals, in the major metropolis were shut off early this week, according to the AP. In addition, the mayor decreed that shops in the city were not permitted to set thermostats under 79 F (26 C) to avoid taxing the power grid.

Parts of the city were hit by power outages last week amid the building heat. The outages were believed to have been caused by increased use of air conditioners, according to The Guardian.

Much of the country has been unusually dry over the last several months. This prolonged dryness has led to one of the worst droughts in decades, according to The Washington Post.

Last week, a shipwrecked relic was discovered in the famous Po River as persistent dryness sent water levels tumbling. The Po River is Italy's largest river at 405 miles (650 km) long and is the biggest reservoir of fresh water available in the country.

Italy sizzles under record heat as drought grips the country

On Saturday, Archbishop Mario Delpini made a pilgrimage to three churches on the outskirts of Milan that serve the area's farming community to pray for "the gift of rain," according to the AP. The archbishop also blessed fields in the area with holy water.

By Wednesday, the pope was weighing in on the seriousness of the matter. In a post on Twitter, Pope Francis warned that the drought has become "a serious problem" and he admonished followers that caring for the planet is everyone's responsibility. "The future of the earth is in our hands," he said.

AccuWeather forecasters say the intense heat over the last several days can be attributed to the position of the jet stream.

"A northward bulge in the jet stream over eastern Europe this week is pulling sweltering conditions northward across parts of south-central and eastern Europe," AccuWeather Meteorologist Alyssa Smithmyer explained.

AccuWeather long-range forecasters have highlighted the threat of excessive heat in Italy since the 2022 European summer forecast was released in May.

The heat quickly turned historic as portions of the country began to bake last week.

"Until this week, there had only been one day in June where temperatures reached 100 degrees Fahrenheit (37.8 degrees Celsius) in Rome since records began," AccuWeather Senior Meteorologist Tyler Roys said.

At the beginning of the week, the highest temperature ever recorded in Rome in June occurred in 1982, when the mercury topped out at 100 F (37.8 C). In the 40 years since, the city had not broken that temperature record.

That all changed on Monday once thermometers soared to a staggering 105 F (40.5 C) in the Italian capital. This reading smashed the previous all-time June record high. Temperatures broke into triple digits Fahrenheit again on Tuesday as Rome topped out at 100 F (37.8 C).

The heat began to temper somewhat in parts of Italy on Wednesday, as high temperatures fell about 10 degrees Fahrenheit (5.6 degrees Celcius) short of Tuesday's readings.

"While some residents found a bit of relief from the worst of the heat on Wednesday, the extreme heat will continue to focus across the Balkans and parts of northeastern Europe through the weekend," Smithmyer said.

Heat may not be as intense, but it will still be above average for many across Italy.

"The heat wave looks to continue unabated through the weekend in Milan, with high temperatures in excess of 90 F (32.2 C) in the forecast until at least Sunday," AccuWeather Senior Meteorologist Dan Pydynowski said.