Hot weather will once again be prevalent across most of Europe following the continent’s hottest summer on record in 2021. AccuWeather meteorologists break down where the weather will be hotter than normal and which areas will be stormier than others.

Tourists and locals enjoyed the warm weather after the sun came out in Paris, France, on May 9.

Summer is fast approaching and many people across Europe could be facing another summer that rivals the record-setting heat experienced in 2021, but the warm weather is only part of the story of the weather pattern across the continent in the coming months.

AccuWeather's team of long-range forecasters has been analyzing the weather patterns around the globe to piece together what will unfold across Europe in the weeks and months ahead. Both Senior Meteorologist Tyler Roys and Senior Meteorologist Alan Reppert believe that this summer could be hotter than normal for most of the continent.

Roys said that an upper-level ridge, which promotes dry, warm weather, will be "a large player" in the weather pattern over Europe throughout the summer months.

Summer officially beings on Tuesday, June 21, in the Northern Hemisphere. However, those eager for the arrival of the new season may prefer to celebrate the arrival of summer on June 1, which marks the first day of meteorological summer. 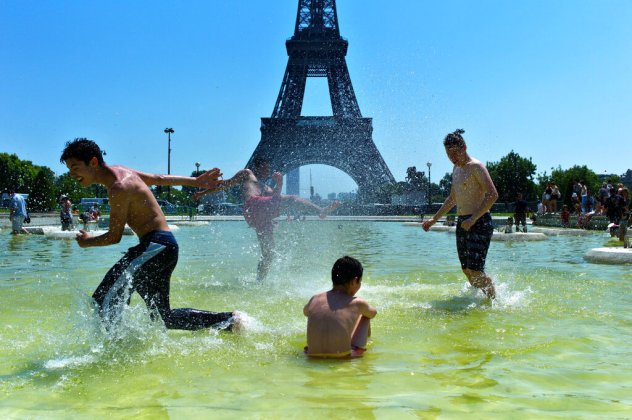 Boys play in the fountain of the Trocadero gardens, in front of the Eiffel Tower, in Paris, Wednesday, July 1, 2015. (AP Photo/Thibault Camus)

The widespread warmth could have a direct impact on millions of Europeans in the form of higher cooling costs.

"Energy, in general, can be a concern this summer," Roys said, "especially in the Balkans to France and Germany."

What part of the summer will be the hottest? And will severe thunderstorms disrupt summer holidays? The answers to that and more can be found below in a complete region-by-region breakdown of the 2022 Europe summer forecast:

The summer as a whole is shaping up to be warmer than normal from Portugal to Italy, but Roys said that there will still be "a lot of ups and downs" throughout the season.

Each wave of above-normal temperatures will likely last a week or two and feature record-challenging warmth, but the hot spells will be broken up by slow-moving storm systems that will knock down temperatures and bring the chance for precipitation.

Reppert added that even during these breaks in the hot spells when temperatures during the day are around normal, overnight lows could remain on the mild side. 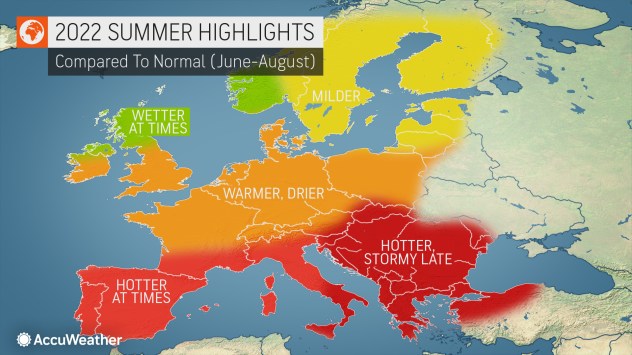 It could feel even hotter in Italy this summer not only due to Mother Nature but due to new rules surrounding air conditioners.

In April, the Italian government announced Operation Thermostat, a new rule which will restrict air conditioning units from being set lower than 27 degrees C (80 degrees F), according to Politico.

The move could save 4 billion cubic meters of gas this year, and those who do not follow the new law face a fine of up to 3,000 Euros, or more than $3,100. Operation Thermostat will continue through the winter months with heating units not being allowed to exceed 19 C (66.2 F). 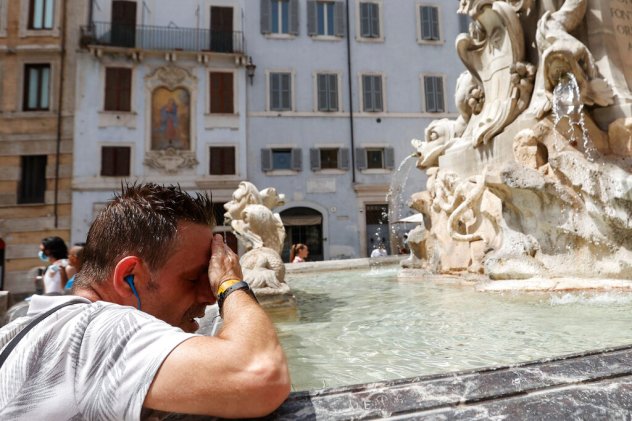 A man refreshes himself at a fountain in downtown Rome, Wednesday, Aug. 11, 2021. The ongoing heat wave will last up until the weekend with temperatures expected to reach over 40 degrees Celsius in many parts of Italy. (AP Photo/Riccardo De Luca)

The periodic breaks in the heat over western Europe will not only help to cut cooling costs, but the chances for rain that come during the breaks could help limit the summer wildfire threat.

"The threat for wildfires might take longer to develop in parts of southern France and southern Germany just because of how much precipitation has fallen this past winter into early spring," Roys explained.

When wildfires do ignite across the region, the breaks in the heat will provide opportunities for crews to battle the blazes and get them under control before another hot spell commences.

Storms to break up summer heat in Balkans

Record-challenging heat will be one of the biggest weather factors of the summer across southern Europe, but the second half of the season could shape up a bit differently across the Balkan Peninsula compared to the Iberian Peninsula.

Similar to last summer, towns and cities across the Balkans can expect more days at or above 32 C (90 F) this year when compared to the long-term average.

This year, AccuWeather meteorologists are predicting that the temperature will reach 32 C between 31 and 38 times in Bucharest and between 55 and 63 times in Athens. 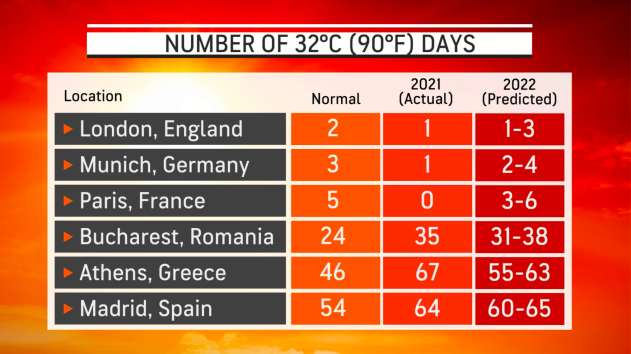 The hot spells will be accompanied by drought concerns, although the drought outlook across this region of Europe is slightly better when compared to 2021.

"Last year, there were concerns about not having enough water," Reppert said. "Reservoirs are probably a little better than they were last year [at this time]."

This year, the second half of the summer is likely to usher in the chance for thunderstorms on a more frequent basis than during the first half of the summer. However, the storms will not be widespread enough to end the drought.

The thunderstorms will be a double-edged sword. While the rainfall will help to ease some drought concerns across the Balkans, it will bring the risk of severe weather, including storms that could damage wheat and corn crops across the region. Roys also warned that the summer weather could make it more challenging to grow vegetable crops.

The summertime heat is not predicted to be as intense across northern Europe and the British Isles compared to southern Europe, but people from Paris to Warsaw will still need to keep a close eye on the weather in the coming months.

"[There is] going to be the threat for severe storms from France to Poland that doesn't go away," Roys explained. He added that the storms are not expected to be as widespread or as frequent as past summers but could still endanger lives and property when they pop up.

Last summer, catastrophic flooding in Belgium and Germany from a slow-moving storm was described as one of the worst natural disasters Europe has ever experienced as floodwaters washed away entire buildings and left more than 200 people dead. 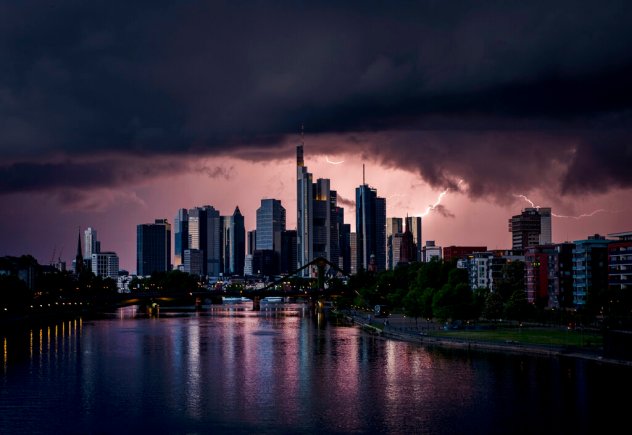 Lightning is seen behind the buildings of the banking district in Frankfurt, Germany, Friday, May 1, 2020. (AP Photo/Michael Probst)

Similar to the Balkan Peninsula, thunderstorms across northern Europe will help alleviate some, but not all, of the drought concerns.

"A lot of riverboat excursions could be facing other complications because if it's drier, there's less water in the rivers," Roys added.

A report released in early May detailed the extent of the ongoing drought across Europe, highlighting the concerns for vital river basins ahead of the summer.

This could complicate summer plans for water-themed trips, such as voyages on riverboats, during what could be the busiest summer holiday season since before the coronavirus pandemic began.

The middle of the summer will feature the greatest potential for hot spells across the region, which could impact one of the most well-known sporting events in the world.

The Tour de France will get underway on Friday, July 1, and continue through Sunday, July 24, and Roys warned that the midsummer heat could make it a "challenging course" this year when the riders are not in the mountains. 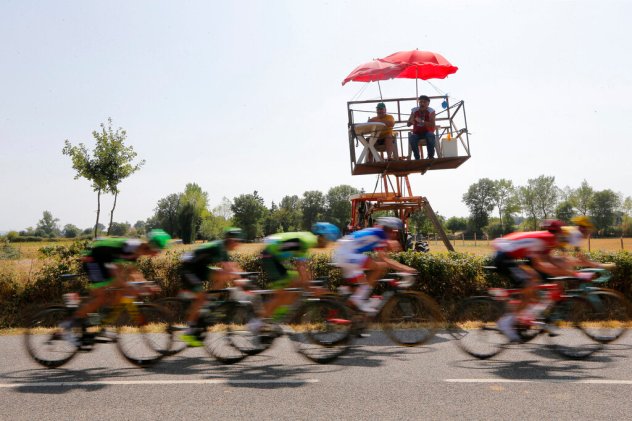 Spectators shield themselves from the sun with umbrellas as temperatures reached 39 degrees Celsius, or 102 degrees Fahrenheit as the breakaway group passes during the thirteenth stage of the Tour de France on Friday, July 17, 2015. (AP Photo/Christophe Ena)

"The heat I think will play a crucial role in how they are able to handle the course," Roys added. The word of caution is not just for the riders, but the countless spectators that line the course to cheer on the riders outside in the July weather.

Summer weather will waste no time arriving in the British Isles, but this may not be indicative of what the entire season will serve up across the region.

"It would not be surprising if the warmth this summer occurs early on and then becomes more of a seesaw temperature," Roys explained.

The first half of the summer will bring the best chance for the temperature in London to reach 32 C (90 F). Last summer, the mercury reached this benchmark on only one occasion. This year, AccuWeather meteorologists are predicting one to three days at or above 32 C in London, which is typical for the city. 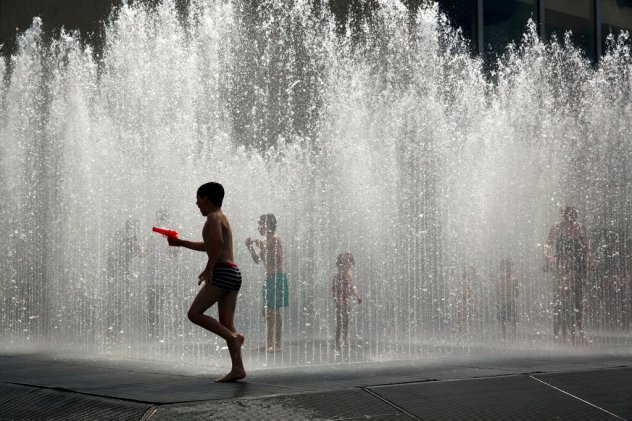 A boy runs with a toy gun beside the Jeppe Hein water fountain "Appearing Rooms" on the south bank of the River Thames on a warm day in London, Thursday, July 17, 2014. (AP Photo/Matt Dunham)

The early summer warmth will be followed up by an atmospheric tug of war between warm spells and bouts of rain, particularly across Northern Ireland and Scotland.

"Many across these areas will consider this a normal summer in terms of precipitation, but any warmth could potentially challenge records," Roys said.

The rain and thunderstorms across the northern British Isles will extend eastward into Norway and eventually take a southern turn into Poland and the Baltic states. However, there will be occasional breaks in the pattern for residents and visitors to enjoy outdoor activities without needing a raincoat or umbrella.