The storm-weary Northwest can’t seem to catch a break as another atmospheric river will cause more soaking rain to impact the region, as well as British Columbia, through this weekend.

A far rainier-than-average November will end on yet another wet note for the Pacific Northwest as another atmospheric river is set to plow into the region with drenching downpours.

After months of heat waves and drought, weather in the Pacific Northwest has flipped completely to flooding rain and gusty storms. AccuWeather forecasters say the trend of gusty, stormy conditions in the northwestern United States and British Columbia, Canada, is expected to continue with another storm aiming for the region.

"An atmospheric river led to major flooding and washed out roads last week in Washington state and British Columbia," said AccuWeather Meteorologist Ryan Adamson, adding that another is on the way.

Northwestern Washington, in particular, could be the hardest-hit area in the U.S., as it has already received more rainfall this month (just over 10 inches) than it typically reports throughout the entire month of November (about 6.30 inches). Since September, rainfall amounts have been above average by 68% in Seattle. Portland, Oregon, and Spokane, Washington, are just two of the other cities with rainfall amounts for November that are already above normal. 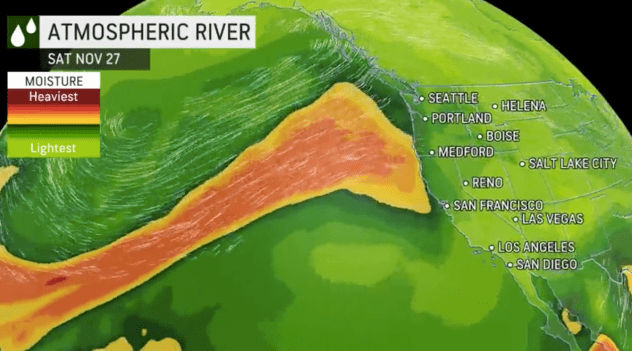 Much of British Columbia has also hit a peak in precipitation, including Vancouver, which has received nearly twice its average rainfall this November. This could continue to make the situation hazardous as the soil there is saturated and gusts of winds can easily bring down trees on power lines and roadways.

Rain fell across the region on Saturday and Saturday night, with some snowflakes mixing in at the highest elevations of the Idaho and Montana Rockies.

"Any additional rain can exacerbate ongoing flooding and slow the receding of rivers," Adamson said. Some of the heaviest rain could cause rivers to rise again, he added. Landslides are also a concern with this storm along with possible road closures.

As of early Friday, the Skagit River in Washington was at major flood stage near the city Mount Vernon and the town of Concrete. Several other rivers in the region were at moderate flood state, according to the National Weather Service. 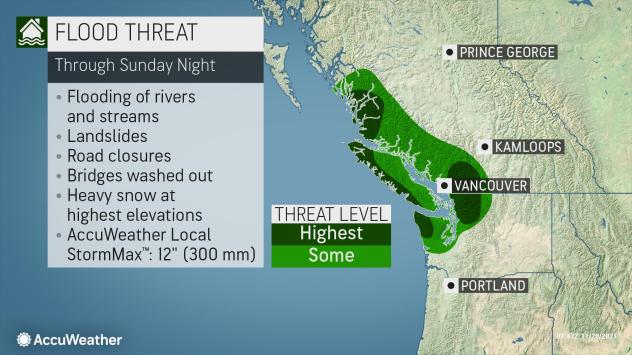 Rain can continue early this week, as the next storm that poses a serious flooding risk is set to arrive Monday night. This system is expected to steer northward, dropping less rainfall in cities such as Seattle but bringing more rain to places such as Vancouver into Wednesday morning.

Earlier in the year, residents of the Pacific Northwest may remember a very different picture. Before the seemingly endless stream of storms arrived, this region experienced brutal heat waves and record dry spells. The month of August brought only 11% of average rainfall to Seattle and only 9% to Portland.

Much of the West will have above-average temperatures during this weekend while the anticipated storm moderates temperatures in Washington and areas farther north, according to Pastelok.