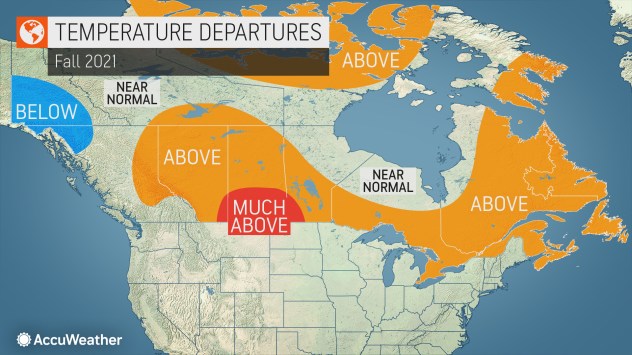 From wildfires to snowfall, autumn in Canada is one of the country's most weather-diverse times of the year. With unique climates spanning from the Pacific coast to the Atlantic coast and vast temperature ranges from the Great Lakes to the Arctic Circle, it may be hard to believe that one specific phenomenon could set the stage for how the weather will shape up across the entire country, but that just may be the case this autumn.

That season-determining phenomenon is known as La Niña, and it stems from thousands of miles away in the central and eastern tropical Pacific Ocean. AccuWeather forecasters released their annual Canada autumn forecast this week, and they pointed to that pattern as a major factor behind the anticipated trends this season.

"La Niña conditions are anticipated this fall, which will likely play a key role in the average weather conditions across portions of Canada during this upcoming season and even perhaps into winter," AccuWeather Senior Meteorologist Brett Anderson said.

Anderson has been providing expert forecasts and analysis on both Canada weather and climate change for decades. He noted that the evolving trends in Canada's climate have altered the seasonal trends toward more widespread season warmth, "especially from the northern mid-latitudes and up into the Arctic region."

Although there can still be seasons marked by widespread cold, Anderson explained that those are becoming "more infrequent."

Fall will officially begin with the autumnal equinox on Sept. 22, but meteorological autumn is just around the corner, starting on Sept. 1. For some, it may feel like the transition into the new season will happen quickly. For a complete region-by-region breakdown on what weather conditions can be expected in the coming months, read on.

La Niña influences on storms and wildfires in the west

The aforementioned La Niña conditions will play a significant role along the Pacific coast of Canada this upcoming season.

The La Niña phenomenon is the abnormal cooling of the surface waters of the Pacific Ocean near the equator, which can influence the strength and position of the jet stream across North America, Anderson explained. Its influence on the Pacific jet stream plays a crucial role in directing the course and impacts of storms.

"The jet stream is like a pathway for storms, thus we are expecting a stormier fall, especially across the western half of British Columbia, with above-normal rainfall," he said. "Large portions of British Columbia have been under severe drought and dealing with a tremendous amount of fires and poor air quality this summer."

That storminess is good news for firefighters and for air quality concerns, as smoke is expected to disperse and temperatures are forecast to fall.

However, not all locations in the westernmost province will get this benefit.

Thus far this summer, the province has been blanketed by the haze of smoke wafting from hundreds of wildfires. Fueled by record-breaking temperatures in multiple areas, massive portions of the province have been consumed by the deadly infernos, including nearly the entire town of Lytton.

Residents of Lytton, British Columbia, raced to flee the town as a wildfire quickly approached the community, forcing a full evacuation order to be issued.

"The bad news is that in areas where there will be less rain, such as south-central British Columbia, there will be more wind, which may inhibit firefighting efforts," Anderson said. "In burn scar areas along hill and mountain slopes, any rainstorms may lead to debris flows."

Elsewhere in the country, a colder-than-normal fall could be in store for the areas around British Columbia in the Yukon Territories and Alberta. Fueled by the La Niña-influenced storms, the pattern could mean early snowfall for some.

According to Anderson, snow may appear earlier than normal in the coastal mountains of British Columbia and farther east into the Canadian Rockies, which stretch into Alberta.

"Parts of northwestern British Columba and the Yukon may end up with a colder fall compared to normal as a majority of cold outbreaks may be directed into this region from eastern Alaska," he said. 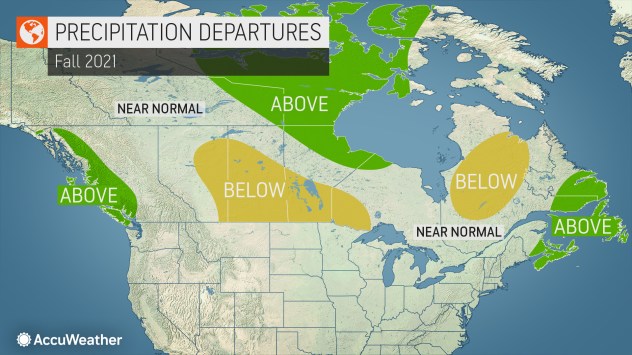 In the Canadian Prairies, which spread throughout much of the country's midsection, an influx of storms to the north may prevent that cold and snow from dropping into the southern Prairies.

In place of that cold and snow, the southern Prairies are likely to have a much different fall.

"This type of storm track will also mean a windier- and drier-than-normal pattern for much of the southern Prairies, which have been hit hard by drought this spring and summer," Anderson said.

According to the Canadian Drought Monitor, severe to exceptional drought conditions were gripping the southern Prairies by July. Calgary and Edmonton, both located in the southern half of Alberta, were experiencing extreme drought conditions -- the second-highest level of drought. Saskatoon, located in southeastern Saskatchewan, and Winnipeg, in far southern Manitoba, were both under the highest level of drought: exceptional.

The dry conditions expected this fall do not spell good news for drought woes in the region.

The season will play out much differently farther east. In place of wildfires, drought, choking air quality or early-arriving snow, much of eastern Canada can expect a mild fall, Anderson said. Conditions will stay placid around the major cities of Toronto and Quebec thanks to nearby water temperatures.

"Above-normal water temperatures throughout the Great Lakes will likely persist through the season," Anderson said. "This will have its biggest influence on nighttime temperatures, being milder, across the region."

Milder air won't mean "perfect conditions" every day for the entire season, however. Anderson noted that shots of cold air could penetrate Ontario and northern Quebec later in the season, while severe thunderstorms from the summer could linger into September for the provinces.

Even farther east, the Atlantic's sea-surface temperatures could swing a number of factors for the provinces of Nova Scotia, New Brunswick, Prince Edward Island, Newfoundland and Labrador.

In regards to temperatures, warm-weather fans can rejoice that the combination of higher sea surface temperatures and an active storm track will likely mean above-normal temperatures.

But in regards to tropical storm activity, that warm water could spell trouble.

"There is a higher-than-normal risk for a landfalling tropical storm or hurricane over Nova Scotia this fall as the Atlantic basin is expected to have a higher-than-normal number of storms that may recurve northward toward the region," Anderson said. "Warmer water than usual may also allow some storms to maintain strength longer than usual as they get this far north."

Hurricane Henri to take aim at the Hamptons as a hurricane