Rome's main museums reopened on May 19 after being closed for nearly three months due to the coronavirus lockdown.

Summer 2020 is just about a month away, and Europeans are already flocking to seaside escapes, parks and cafes as conditions warm up after weeks of being pent up during coronavirus lockdown measures. AccuWeather meteorologists released their annual Europe summer forecast this week, painting a picture for what Mother Nature has in store across the continent -- even when it's not clear exactly what daily life will look like for millions of people as countries start to ease up on COVID-19 restrictions.

AccuWeather’s team of international forecasters, led by Senior Meteorologist Jason Nicholls, has been hard at work analyzing weather patterns across Europe for the upcoming seasonal shift. Nicholls has been with the company for 26 years and has been focused on Europe weather forecasts for the last two decades. Summer officially begins on June 20, and for some, the season will bring intense heat, while others will need to brace for the risk of severe storms and even wildfires. 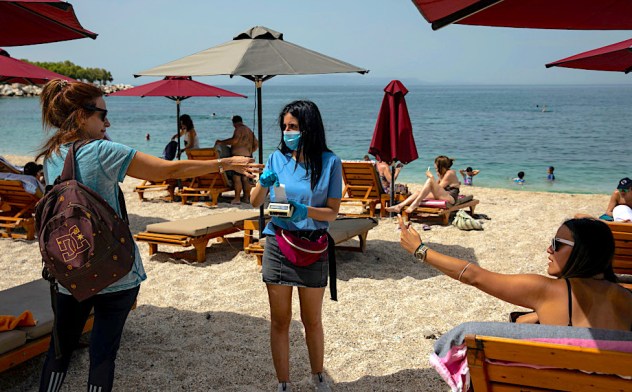 Swimmers pay for sunbeds at an employee of a beach bar who wears a protective mask against coronavirus, at Alimos beach, near Athens, on Saturday, May 16, 2020. Greece allowed the reopening of organized beaches, where visitors pay to get in, from Saturday when a heat wave is expected to hit the country, a measure that would affect 515 beaches all over Greece, where shade umbrellas must be planted at least 4 meters (13 feet) apart, and a maximum 40 people will be allowed in every 1,000 square meters (11,000 square feet) of beach. (AP Photo/Yorgos Karahalis)

“There are two big things that are playing a role in the forecast: the very wet March and April across much of Iberia and the dry weather from southern parts of the United Kingdom through Ukraine,” AccuWeather Meteorologist Tyler Roys said.

Regardless of what events and gatherings are able to go on and what holidays look like this season, AccuWeather has you covered in a region-by-region breakdown below.

Many people across the Iberian Peninsula have stayed indoors in recent months, not only because of lockdowns related to the coronavirus, but also due to the rain that has frequented the region. Some areas recorded double their normal rainfall during April.

The unusually wet pattern that has soaked Spain and Portugal throughout the spring is getting ready to break and will give way to typical summer weather.

“It will largely be hot across much of Spain and Portugal and mainly dry, but there will still be the traditional summertime thunderstorms that will pop up on an occasion, mainly in the mountainous regions,” Roys said.

However, the spring rains could have implications during the second half of the summer. “The wet end of winter and spring for Iberia is a blessing and a curse,” Roys said.

One of the benefits of the recent rain is that it has helped to fill water reservoirs across the region. Additionally, fewer tourists during the coronavirus pandemic have helped the area conserve water, allowing more water to be allocated to farmers across the region heading into the dry season, The Olive Press reported.

However, the wet weather will allow more brush and vegetation to grow, which will eventually dry out in the summer heat.

“[This] could make it into a more dangerous wildfire season with more fuel to work with,” Roys added.

Hot and dry conditions will prevail across most of southern Europe in the coming months, bringing with it some concerns, especially for farmers.

“This could lead to temperatures in the upper 30s C and lower 40s C (98 F to 107 F) for parts of northern Italy and the valleys of the Balkans several times or for a prolonged period of time,” Roys said.

This weather pattern may seem all too familiar for those across France and Germany when looking back at recent summers.

“This would be the third straight summer for parts of eastern France and western Germany to have drought conditions,” Roys said. “This, in turn, leads to low water levels for the Rhine River.”

The low water levels could impact boats and ships that rely on the waterway for business.

“I do not think they will see the issues they had in 2018 and 2019, but below-normal rainfall for most spots would keep the river down,” Alan Reppert, a senior forecaster who has been with AccuWeather for 17 years, said. Reppert has been focused on forecasting for Europe for the last 15 years.

The dry conditions will arrive at a time when cruises that operate on the Rhine are preparing to start back up as restrictions related to COVID-19 are being loosened. A-ROSA River Cruises is one of these businesses and is planning to start offering cruises on the Rhine by June, according to Rus Tourism News.

Any late-season heat waves could also potentially impact the Tour de France, which was postponed and is now scheduled to start on Aug. 29 due to the pandemic. Weather played a significant factor in 2019 when thunderstorms cut two stages short near the end of the Tour. 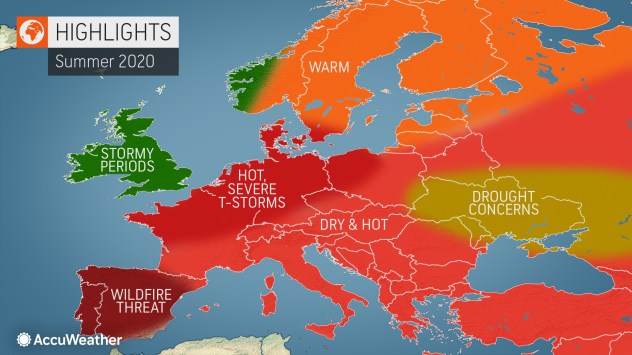 Farmers in Ukraine are already feeling the strains from worsening drought conditions with the country losing 2.6% of all winter crops due to the abnormally dry conditions, according to The Kyiv Post. Farmers that rely on the summer growing season could also face losses with below-normal rainfall in the forecast.

The heat across western Europe is only half of the story. Communities from northern France through northern Poland will face potentially damaging thunderstorms.

“Central and northern France into Germany and Denmark will be the clash zone between the hot and dry conditions and cold fronts moving through with a storm track just to the northwest of the British Isles,” Roys explained.

Paris, Prague, Brussels, Berlin and even Warsaw are some of the larger cities that are encompassed in the zone where severe weather could erupt.

“For severe storms, everything is on the books -- hail, damaging winds, flash flooding and tornadoes,“ Roys added. 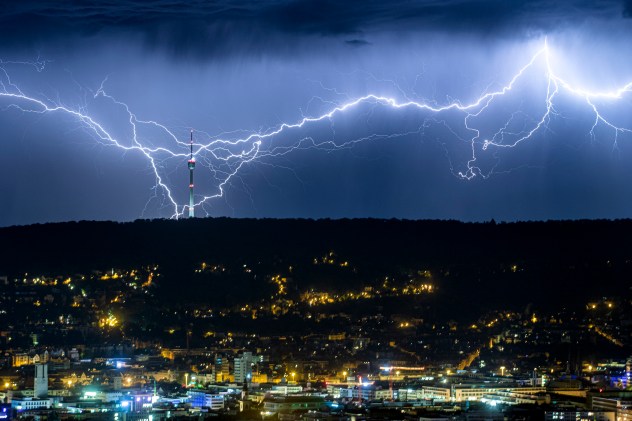 Lightning is seen over the city of Stuttgart, southern Germany, early Saturday, July 27, 2019 as the heat wave in large parts of Europe gives way to storms and heavy rain. (Simon Adomat / dpa via AP)

The summer could start off on a dry note across this region as it will take some time for the stormy pattern to materialize. The bulk of the severe weather is expected to focus on July and into early August, Reppert said.

These storms will help to limit drought concerns that areas farther south will experience, but the rain from the storms will be a double-edged sword. The heaviest storms will be capable of unloading a month’s worth of rainfall in just one day, leading to localized flooding, Reppert said.

People planning outdoor activities or events for later in the summer as lockdowns begin to ease should be mindful of the risk for disruptive storms and have alternate plans in case storms strike.

An unsettled summer is in the offing for the British Isles as rainy spells help to limit the potential for prolonged periods of above-normal temperatures. Forecasters noted that this season will play out as quite the opposite of last summer when most of the Isles faced long stretches of dry conditions.

“Most storm systems that come through will bring periods of rain, mainly across the northern half of Ireland through northwestern Scotland,” Roys said. “With that, there could be occasional thunderstorms that do happen across the British Isles, which could produce flash flooding, damaging winds and small hail.”

Waves of rain will also sweep into Norway, but as systems shift eastward and lose steam, the wet weather will mainly bypass the rest of Scandinavia.

“On the flip side, it doesn't mean a wet summer either as we do expect dry periods to occur, especially across England and Wales,” Roys said, adding that it is during these windows of rain-free weather when temperatures could climb above average for a few days at a time.

“We can't rule out heat pulses like we have seen in recent summers where on one- or two-day stretches, temperatures try to reach 32 C in London and upper 20s in Manchester,” Roys said.

However, the heat should not reach the extreme levels achieved last July. During a late-July heat wave, Cambridge topped out at 38.7 C, marking only the second time the country has recorded a temperature this high. London was not far behind with the mercury peaking at 37.8 C.

Sweden, Finland and the Baltic states

Some of the most tranquil weather across the continent this summer is expected across Scandinavia and into the Baltic region.

Rain from systems arriving from the North Sea will occasionally dampen the region, but the summer will be far from a washout. "Rainfall will largely be near to slightly below normal,” Roys, who has been making predictions at AccuWeather for eight years, said.

Conditions will typically stay on the warmer side throughout the summer with a few opportunities for heat waves in eastern and southern Europe to expand up toward Scandinavia. Although people looking to escape to the outdoors after a lengthy lockdown may appreciate the dry, mild conditions, the expected warm spells paired with infrequent rains could be a recipe for disaster. 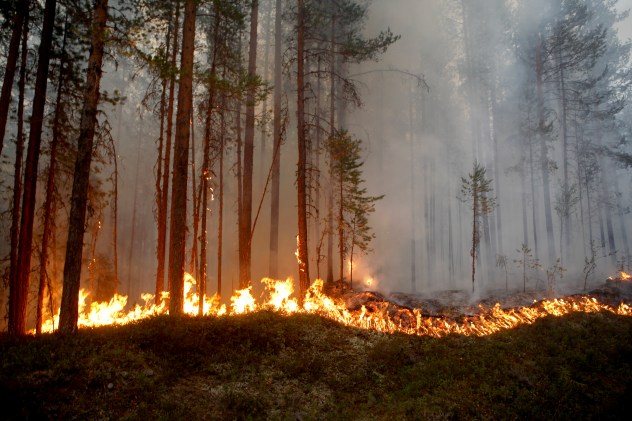 In this Sunday, July 15, 2018, file photo a wildfire burns in Karbole, outside Ljusdal, Sweden. In 2018, Sweden experienced a heat wave that led to forest fires unprecedented in modern history, driving home the possible consequences of global warming for this rich Nordic nation. (Mats Andersson / TT News Agency via AP)

“Wildfires were a threat a couple of summers ago and possibly could be a threat again this year late in the season if drier weather really prevails across the area,“ Roys said. Sweden and Finland will be at the highest risk of wildfires with the second half of the summer bringing the greatest threat of ignition.

This comes just two years after Sweden suffered from some of the worst wildfires in the country’s history. In 2018, early-summer heat paired with exceptionally dry conditions set the stage for a very active wildfire season. In July of that year, there were two dozen major fires burning across the country, three times higher than there were in July 2017, according to The Local.

While a wildfire season this bad is likely not in the offing, people across the region should still prepare for damaging blazes that could erupt throughout the summer.