Nearly 100 people have been reported killed by a presumably large and very damaging tornado that hit around 6 PM last night in Joplin, Missouri.

2021 UPDATE: AccuWeather has written a 10-year anniversary story on the Joplin tornado.

Nearly 100 people have been reported killed by a presumably large and very damaging tornado that hit around 6 PM last night in Joplin, Missouri (timeline | real-time updates). If the death toll reaches 114, it will be in the Top 10 Deadliest Tornadoes according to the SPC. ADDITIONAL UPDATES WILL BE PROVIDED ON ACCUWEATHER.COM, AND ON MY TWITTER & FACEBOOK FEEDS THROUGHOUT THE DAY. 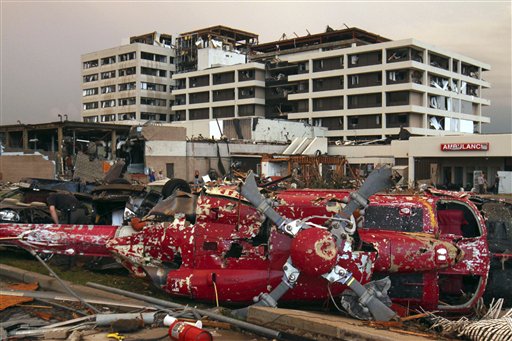 A destroyed helicopter lies on its side in the parking lot of the Joplin Regional Medical Center in Joplin, Mo., Sunday, May 22, 2011. A large tornado moved through much of the city, damaging the hospital and hundreds of homes and businesses. (AP Photo/Mark Schiefelbein)

Early this morning, a Severe Thunderstorm Warning went into effect for the city, winds were estimated at 60-70 mph by AccuWeather & NWS staff, and 1-inch diameter hail was reported by a spotter just east of the Joplin airport.