A rainbow met a tornado in Texas this week, and it was beautiful.

Even though this tired meme is not real, over the years, some storm chasers have been lucky enough to film a tornado with a rainbow. Friday evening in Texas, however, dozens snapped photos of a "rainbownado" on Route 70 near the town of Lockett, west of Wichita Falls. Chaser Adam Lucio got perhaps the best video, adding "We've all seen that picture that was edited to make it look like a tornado is sucking in a rainbow. Well, I imagine this is about as close to that in real life as you can get. Stunned. Nature knows no limits." 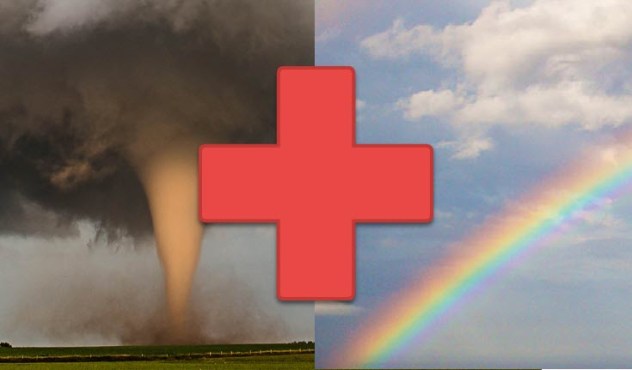 He got very lucky, because the tornado was in the same shape as the rainbow, from his perspective. This caused his video to show the swirling twister dust and debris behind the rainbow, covered by color. I don't think I've ever seen that before. Eric Burns got a different, but nonetheless beautiful, perspective.

Churning up brown dirt, the tornado was very photogenic (see William Reid's photo). Storm Chaser Matt Phelps got a close-up video of farm buildings being destroyed. Fortunately, no one was injured or killed. Texas Storm Chasers also got a good shot of the twister and rainbow. Ryan Shepherd got another great view... as did Melanie Metz. But this one by Blake Brown about takes the cake! Chaser Cameron Redwine got a good action shot of himself being pelted by hail in front of the tornado.

Reed Timmer was in on it too:

Meteorologist Reed Timmer was chasing a tornado in Lockett and Crowell, Texas on April 23 as “golf ball-” and “baseball-” sized hail pelted his car, cracking his windshield.