The first major winter storm of 2018 started out by delivering snow and ice to Florida and Georgia, then brought heavy snow to the eastern Carolinas and mid-Atlantic, before burying New England in up to two feet of snow.

The highest snow totals by state were:

The heavy snow on the coasts of the Carolinas and Georgia were particularly impressive. Charleston, Savannah and northern Florida hadn't seen significant snow since December 1989. The Outer Banks of North Carolina see snow every few years, but not normally this much right up against the ocean.

The storm was preceded and followed by extreme, record-setting cold... the Outer Banks were also dealing with frozen bays and "ice shoves" -- something that normally happens in the Great Lakes or on the coast of New England.

The Outer Banks are no stranger to extreme weather but the sight of ice shoves jutting up against a dock in Duck, North Carolina, on Jan. 3 makes for a rare scene.

The highest wind gusts reported by state (>70 mph) were: 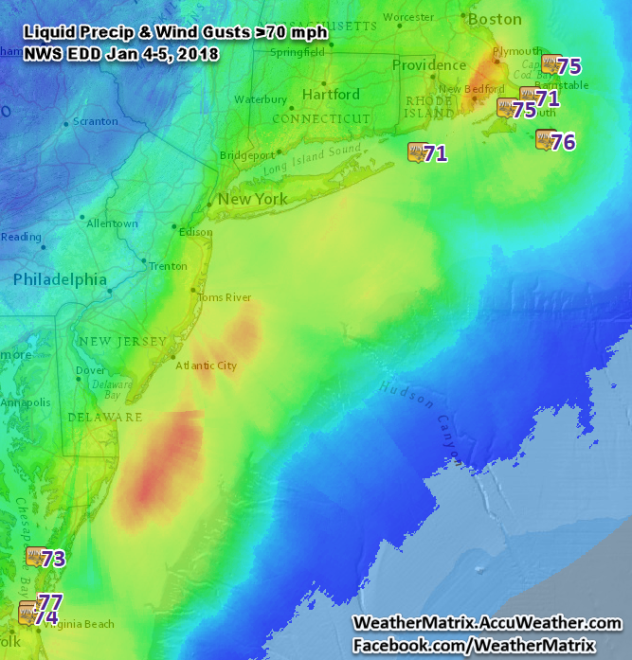 Waves reported were over 50 feet at two buoys! I don't think I've seen higher waves recorded on buoys since I've been blogging (2005). The all-time record was 59 feet up until 2007 when it rose to 62. 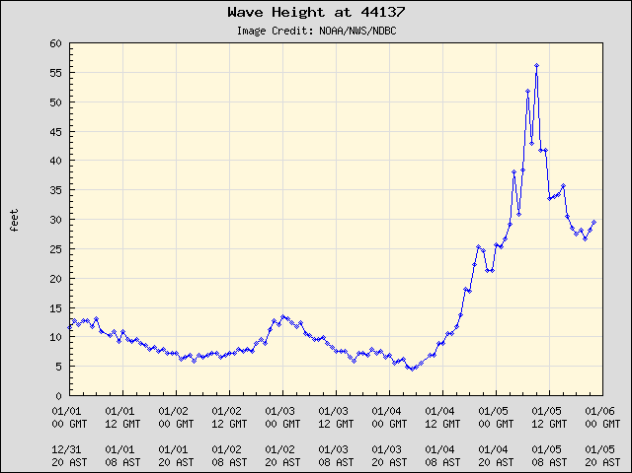 Over 100,000 people lost power due to high winds, and damage was reported. Atmospheric pressures fell to rarely seen levels. At sea, the WPC reckoned the center of the cyclone officially fell to 949 mb (28.02 in.), plunging more than 60 mb in less than a day, which was probably an all-time record. As far as actual recording instruments, one station on land indicated 948 mb (27.99 in) but that sensor had problems. Buoy #44027's pressure reading bottomed out at 28.17", while other nearby buoys' pressure readings stopped transmitting due to instrument malfunction or quality control algorithms before hitting their lows.

A report of 947 mb (27.95") was rumored at Kent Island, New Brunswick, Canada, something I could not confirm as of this writing. St. Johns, New Brunswick, Canada had never experienced pressure readings so low. The reason these readings are significant is that those pressures are normally reserved for a Category 3 hurricane. The Blizzard of 1993 was only 960 mb and the 1991 Perfect Storm was even higher, at 972 mb. One of the only landfalling storms to beat the Blizzard of 2018 for pressure was Hurricane Sandy, at 940 mb, in 2012. It's quite possible this storm was the deepest landfalling winter storm in the U.S. on record. 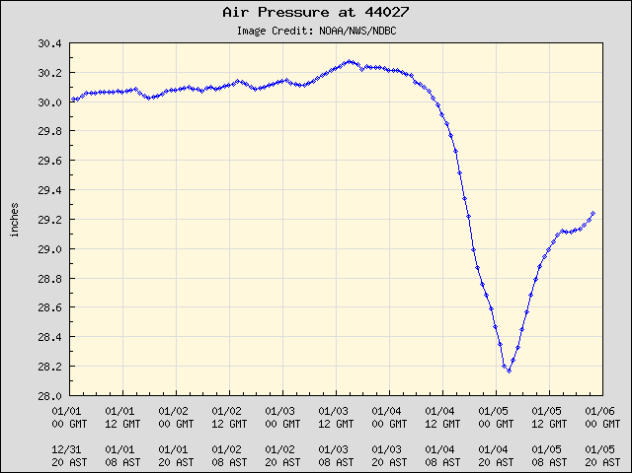 On the Massachusetts shore, coastal homes were inundated with a cold slushy ice, snow and storm surge; Boston broke their record high tide! Reed Timmer had a heck of a ride through the floodwaters.