Dangerous heat wave to descend on the UK, Ireland next week

The potential is increasing for a sweltering heat wave across the British Isles next week.

Unseasonable warmth has prevailed across the entire United Kingdom in June, and the most intense heat of the month is yet to come. 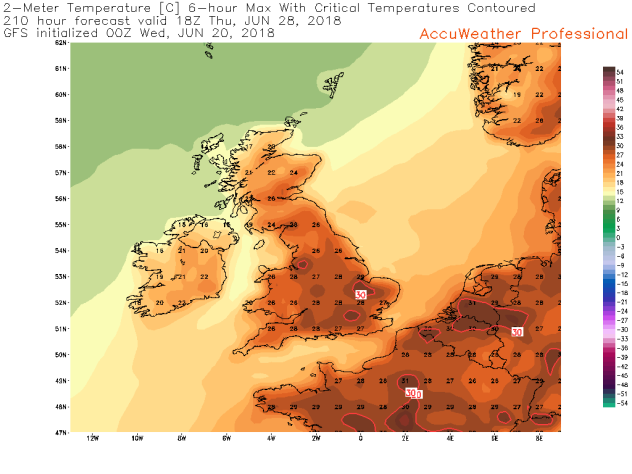 The above image shows high temperatures on Thursday, June 28, based on the GFS model.

A strong area of high pressure will build over the Isles this weekend and shift slowly eastward next week.

This shift to the east will allow flow to turn southerly and pull hot air from the Mediterranean northward across France and into the United Kingdom and Ireland.

The warming trend will begin this weekend; however, the heat will worse dramatically next week.

The official definition of a heat wave is five consecutive days of temperatures at least 5 degrees Celsius (9 degrees Fahrenheit) above normal.

This is certainly possible next week as temperatures will be close to 5 C above normal in many inland locations across the British Isles.

Taking London, for example, the normal high temperature next week is 20.6 C (69.0 F). By Monday, high temperatures are expected to be near 25.6 C (78.0 F), high enough to count toward the first day of the possible heat wave. 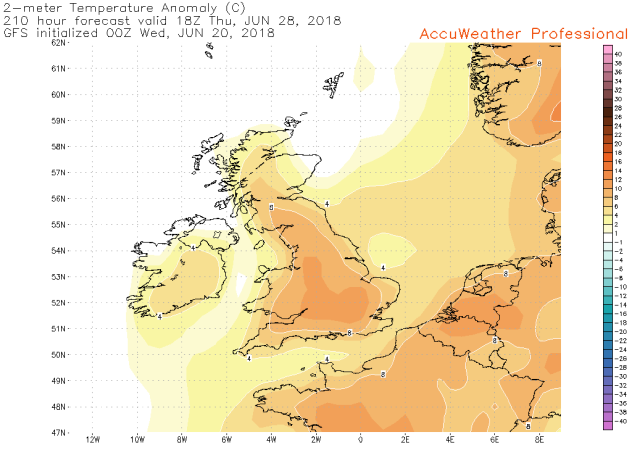 Just how high temperatures climb in the hottest locations next week remains unclear, but 27 C (80 F) is a safe bet and 32 C (90 F) is not out of the question.

For London itself, I'll take a stab and say high temperatures will be within 1 degree of 30 C (86 F) on Thursday and Friday.

The area of high pressure over western Europe will break down and push farther east next weekend allowing a storm from the Atlantic to arrive, ending the heat wave and bringing the risk for showers and thunderstorms.

Due to this being a long-duration heat event, there will be an elevated risk for heat-related illnesses, especially in the youth and elderly.

People should limit there exposure to the heat during the hottest times of the day and spend time in air-conditioned locations when possible.

The heat will be most noticeable at night late next week when temperatures will only fall close to normal daytime highs in some locations.