One of the main teleconnections heading into the winter season will be the rare triple La Niña which should carry through much of the season. Even if sea-surface temperatures return to neutral in January, the atmosphere should remain La Niña-like through the end of the winter season. 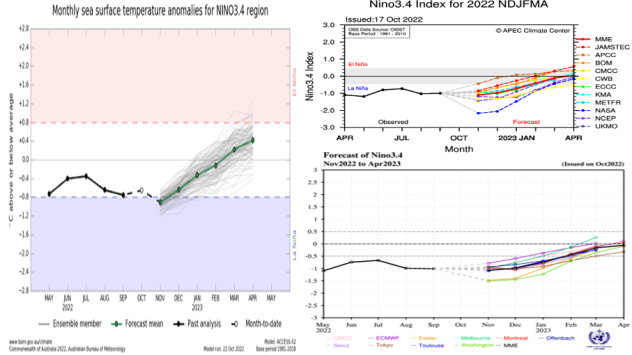 The current negative Indian Ocean Dipole (-IOD) is past peak and should return to a neutral state in late November or December, so it should have minimal impact on the winter pattern. We also looked at analog years and the latest climate models to formulate our outlook. Below are composites for temperature and precipitation for our analog years. 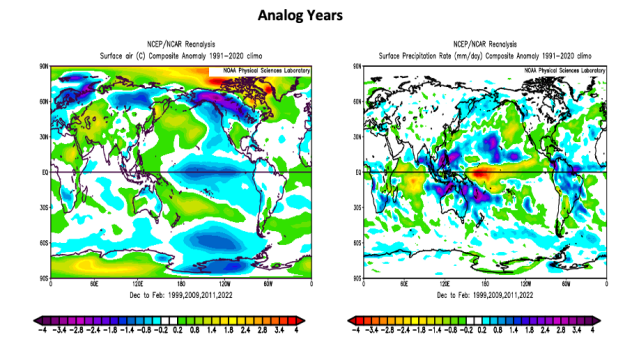 The regional breakdown of our winter outlook follows.

Temperatures will average near to above normal across Japan this winter, but there can be shots of cold air in January into early February. These cold shots can result in significant sea-effect snow events in Hokkaido and portions of western Honshu. A southward dip in the jet stream around mid-season may allow for the right combination of cold and moisture to bring snow to the Tokyo area. Normal snowfall around Tokyo is about 2-4 inches (5-10 cm), and we are forecasting snowfall of 1-3 inches (3-8 cm) in Tokyo.

Overall, precipitation across Japan is expected to average from below normal in the Ryukyu Islands and southwestern Japan to around normal in central Honshu and near to above normal in northern Japan. However, there is the potential for a tropical system to impact the Ryukyu Islands early in the season which could skew rainfall to normal or above in the area.

Eastern China and the Korean Peninsula:

A mild start to the season is expected in these areas with the potential for a couple of cold shots in January and February which can result in temperatures averaging near normal in Manchuria, northeastern China and the Koreas. There is a chance for temperatures to be a little colder than normal in parts of far northeastern China. Much of the rest of eastern China should average milder than usual despite the risk of some cold southward to the Yangtze Valley, including Shanghai, in January or early February.

Winter is normally the drier time of year across these areas, and we are thinking precipitation will be near normal across much of eastern China, but southeastern China, Taiwan and far southern South Korea could be drier than usual barring any tropical moisture early in the season. Far northeastern China could be a bit wetter than normal due to several clipper-type storms and low precipitation normals. As far as snowfall, we are thinking some snow is possible around Beijing in January or early February, but snowfall should be near to below the normal snowfall of 1-3 inches (3-8 cm). Snowfall around Seoul is expected to total 3-6 inches (8-16 cm) which is near to just below normal.

The combination of La Nina conditions and warm waters around Indonesia should favor above-normal rainfall from the Philippines to southern Vietnam, southern Thailand, Indonesia and portions of Malaysia with near-normal rainfall across the rest of Southeast Asia. Tropical activity, especially in December, could help bolster the wet pattern from the Philippines to portions of Vietnam and Thailand.

The combination of clouds and rainfall should hold temperatures near to perhaps slightly below normal in many of these areas, but warm waters around the Philippines can push temperatures above normal across the archipelago.

Near- to above-normal rainfall associated with the northeast monsoon is expected across southern India and Sri Lanka, especially early in the season. There are some teleconnections that the northeast monsoon can carry into January instead of fading later in December. There is also the potential for a depression or cyclonic storm to develop in the northern Indian Ocean in December. The Bay of Bengal may be favored for such activity, but we cannot completely rule out the Arabian Sea for development. The wet pattern in portions of southern India should hold temperatures near to below normal.

The number of western disturbances across northern Afghanistan, northern Pakistan and far northwestern India looks to be down from previous winters, especially later in the season. As a result, many of these areas can be drier and milder than usual. As is typical during the winter, air stagnation can result in air quality problems across portions of central and southern Pakistan into northern India, including Delhi, much of the season. The lack of western disturbances may also mean fewer opportunities to break the stagnation of air masses in northern India resulting in more air quality concerns versus last winter.

Much of the region should be warmer than usual but a brief shot of colder air cannot be ruled out in January. Precipitation is expected to average near to below normal with a better chance of precipitation in many areas coming during January and February.

Much of Turkey could be drier than usual but can receive enough sea-effect snow in northern Turkey to give these areas close-to-normal precipitation. 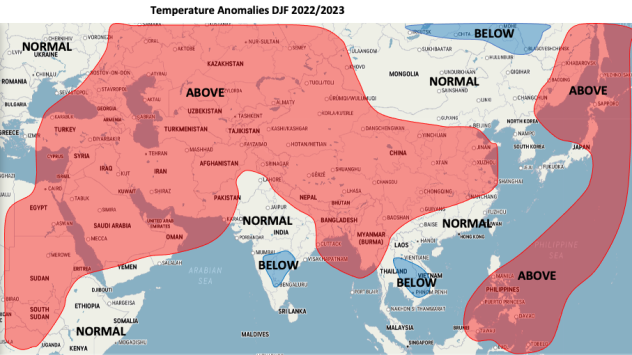 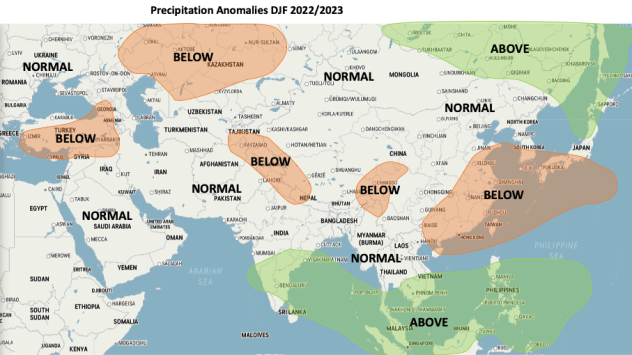