Despite being under the influence of a third straight La Niña, October 2022 still ranked in the top five warmest years on record globally for land/ocean combined.

Typically, La Niñas have a slight cooling influence on the global average temperature. However, despite the La Niña, the world still had a top-five warmest October, while 2022 so far is on a pace to finish somewhere between fifth and seventh warmest on record, according to NOAA.

Last month was the fourth warmest October on record globally, averaging 0.89 of a degree Celsius (1.60 degrees Fahrenheit) above the 20th-century mean. Records go back as far as 1880. 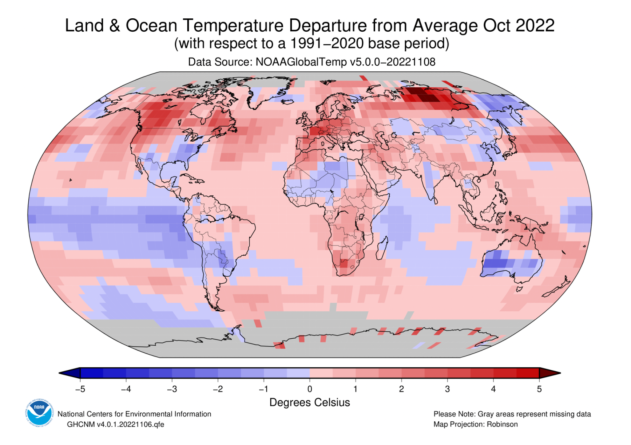 In terms of land masses only, the world had its second-warmest October on record, averaging a whopping 1.42 C (2.56 F) above the 20th-century mean.

The Northern Hemisphere recorded its second-warmest October on record.

October 2022 was the warmest October on record for Europe.

Arctic sea ice extent for October 2022 was the eighth lowest on record, according to the National Snow and Ice Data Center. Satellite-measured records go back to 1979.

According to NASA, October 2022 ranked as the fifth-warmest October on record for land/ocean surface combined. The global average temperature was 0.96 C above the 1951-1980 mean. Records also go back to 1880. 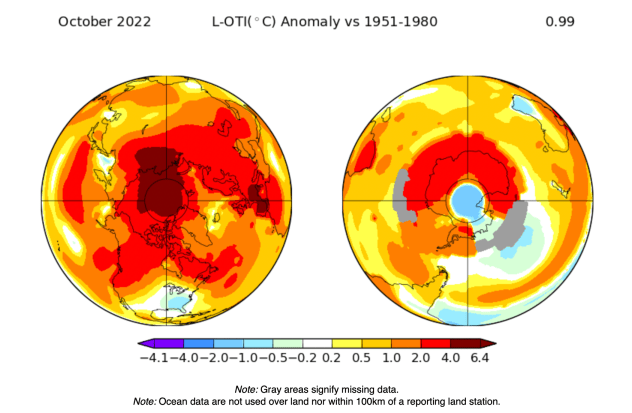