NOAA recently released their Annual Greenhouse Gas Index or AGGI. The AGGI is an estimate of how much extra heat has been captured and trapped by greenhouse gases such as CO2 and methane. 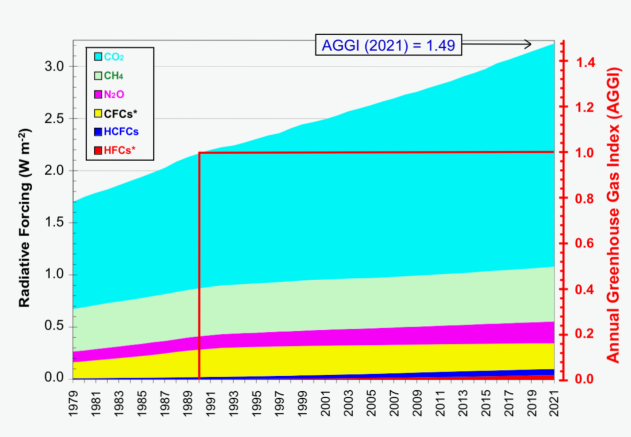 According to NOAA, greenhouse gases trapped a whopping 49 percent more heat in the global atmosphere in 2021 compared to 1990. 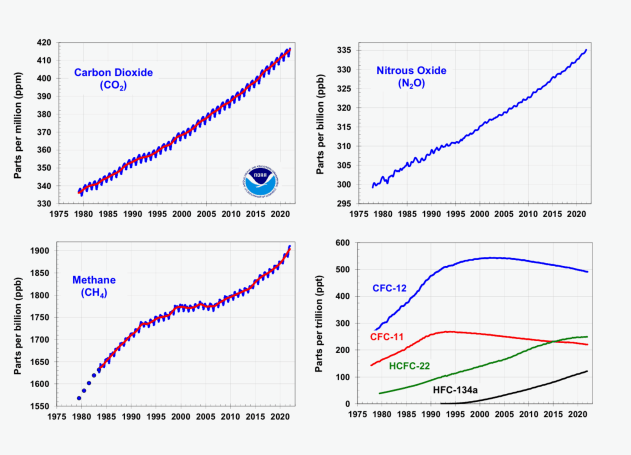 CO2 is by far the largest contributor to the AGGI and can also linger in the atmosphere for 1,000 years or more.

Gases such as methane are actually more potent in terms of trapping heat compared to CO2, but they are much less widespread in the atmosphere and have a much shorter lifespan in the atmosphere (around nine to12 years). Methane emissions have increased 162 percent since the pre-industrial period. Methane emissions are also 15 percent higher today compared to the 1984-2006 period, according to the study.

CO2, methane and nitrous oxide, plus two banned ozone-depleting chemicals, account for about 96% of the excess heat trapped in the atmosphere due to human activity since 1750, according to NOAA.

Our (AGGI) measurements show the primary gases responsible for climate change continue rising rapidly, even as the damage caused by climate change becomes more and more clear. The scientific conclusion that humans are responsible for their increase is irrefutable," said Ariel Stein, the acting director of NOAA’s Global Monitoring Laboratory.

“CO2 is the main player because it stays in the atmosphere and oceans for thousands of years and it is by far the largest contributor to global warming,” said GML Senior Scientist Pieter Tans. “Eliminating CO2 pollution has to be front and center in any efforts to deal with climate change.”