People travel from all over the country to Yosemite National Park to see the rare winter phenomenon known as 'Firefall' at Horsetail Falls. AccuWeather's Emmy Victor spoke to some visitors ahead of the spectacle.

Yosemite National Park is one of the most spectacular sights in California, filled with an expansive wilderness, granite cliffs taller than buildings and Sequoia trees, some of the largest living things on Earth. However, for just a few days every February, photographers flock to a small waterfall to watch water cascade down the cliffside right at sunset.

Horsetail Fall is a small waterfall, one that pales in comparison to Yosemite Falls, an iconic waterfall that is one of the biggest attractions in the park. During dry winters, Horsetail Fall may peak as just a trickle down the eastern edge of El Capitan.

However, when the waterfall is flowing and the light from the setting sun shines from a specific angle, it can create a spectacular phenomenon known as a firefall.

The firefall can be seen only in mid- to late February when the light from the setting sun illuminates the cliff where Horsetail Fall is flowing, making it appear as if the waterfall is glowing orange, yellow or red as if it were on fire.

Weather conditions need to be perfect for people to witness the event — which happens for only a few minutes.

“This unique lighting effect happens only on evenings with a clear sky when the waterfall is flowing,” Yosemite National Park explained on its website. “Even some haze or minor cloudiness can greatly diminish or eliminate the effect.”

The ingredients for a firefall came together in 2021; however, not as many people were able to witness it due to visitation restrictions amid the pandemic. But those who were in the park between Feb. 20 and Feb. 24 were left in awe by the fiery scene.

AccuWeather reporter Emmy Victor was in Yosemite National Park on Thursday, Feb. 24, for the event, and almost all of the people she saw in the park had a camera and were there to see the firefall for themselves.

“Everyone who’s here had to make a reservation online because of COVID; they were trying to control the crowds," Victor reported. "I’ve gotten the chance to talk with some people who have come from all over the state of California, as well as all throughout the country in order to experience this event, which only lasts 10 minutes."

Briana Amr, a California resident, was one of the people in the park on Thursday evening and was optimistic that she'd see the rare phenomenon after checking the weather. 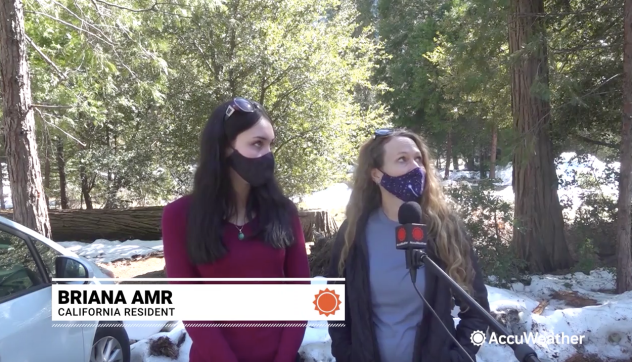 “I have a bunch of photographer friends that already have been capturing it, and it doesn’t look like there’s any clouds in the sky, so I’m pretty sure we’re going to see it," Amr told AccuWeather.

It has been two years since the firefall last "ignited" on the cliffside of El Capitan. Following ideal conditions in 2019, dry conditions prevailed in 2020, and Horsetail Fall was non-existent come mid-February.

This natural phenomenon is reminiscent of the human-created firefall that took place in Yosemite National Park at times between 1872 and 1968. 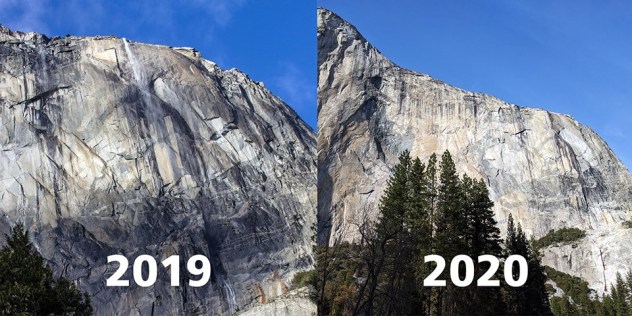 Horsetail Fall can be seen flowing on the left, taken in 2019, while it was nowhere to be found on the right, taken in 2020 amid dry weather. (Photos/Yosemite National Park)

Every afternoon, a fire would be lit atop Glacier Point that would eventually burn down to a pile of coals.

At 9 p.m., these glowing red ashes would be pushed off the cliffside, cascading thousands of feet into the valley below, resulting in an incredibly beautiful firefall for visitors in the park.

This event was discontinued early in 1968 as it was deemed an unnatural spectacle by the director of the National Park Service. Additionally, the large crowds that would gather on a nightly basis would cause traffic jams in the park before trampling through and damaging meadows to watch the light show from a unique perspective.

Footage of the man-made firefall in Glacier Falls in the 1960s. (Video/Yosmite National Park)

Folks who miss out on this year’s firefall will need to start planning for 2022 and hope that Mother Nature cooperates for the second year in a row.

Ample planning is needed, as well as patience. Photographers are encouraged to arrive early in the day to guarantee a spot in the best viewing locations.

But for those that go through the meticulous planning and have a bit of luck with the weather, the experience of seeing Yosemite's firefall is worth the effort.