Travel conditions on the notoriously worst day to move around the country for the Thanksgiving holiday will depend on the severity and track of a storm currently forecast to rage over the central and northeastern United States from Tuesday to Wednesday.

While an active storm track will bring rain to part of the South and rain, ice and snow to parts of the Midwest and Northeast this weekend, a potentially very disruptive storm has its eyes on the Mississippi Valley and Midwest spanning next Tuesday and Wednesday -- at the very height of the Thanksgiving travel rush. 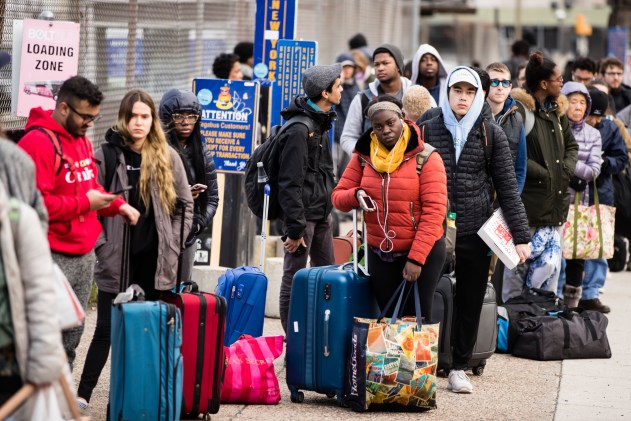 Travelers wait in line to board a bus ahead of the Thanksgiving holiday in Philadelphia, Tuesday, Nov. 20, 2018. (AP Photo/Matt Rourke)

The latest indications are that the storm is likely to move along at a swift pace and have most of its impact on the Heartland during Tuesday and Tuesday night, which might spare these areas the worst weather conditions for the craziest Thanksgiving travel day, which is Wednesday.

"Should the storm develop to its full potential and take a northward track toward the Great Lakes, heavy, windswept snow would fall just northwest of the storm's center with heavy rain and perhaps severe thunderstorms to its south and east," AccuWeather Meteorologist Courtney Travis said. 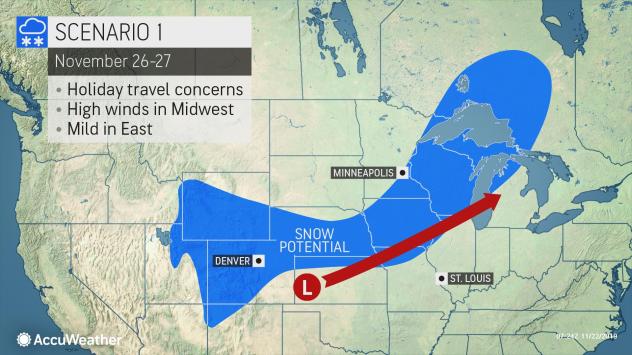 However, the stormy weather on Tuesday and Tuesday night could produce even a heavier volume of travelers on the Wednesday in the immediate wake of the storm.

In this strong storm scenario, the swath from Denver to Omaha, Nebraska; Des Moines, Iowa; and Wausau, Wisconsin, would be in the heavy snow zone, but it could be a close call between rain and snow in Kansas City, Missouri and the Quad Cities area of Iowa and Illinois to near Chicago and Milwaukee.

High winds could be the major cause of flight disruptions in lieu of snow, low visibility and thunderstorms over a broad area of the Central states, including Chicago, Detroit, St. Louis, Minneapolis and Pittsburgh. 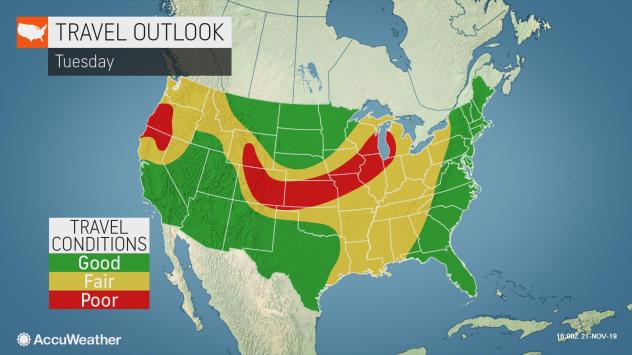 During high winds and other adverse weather conditions, aircraft often must be more spaced out when landing and taking off, if not totally grounded or detoured. This can lead to major delays and even flight cancellations. Crews and aircraft are then displaced, which can lead to ripple-effect problems across much of the nation.

The strong winds may linger into at least part of Wednesday over the Midwest and may be more of a problem from the eastern Great Lakes to New England and the mid-Atlantic region at midweek.

"Depending on how quickly this storm system strengthens, we could be contending with severe thunderstorms from Arkansas and Louisiana through southern Indiana and western portions of Kentucky and Tennessee," AccuWeather Senior Meteorologist Randy Adkins said. 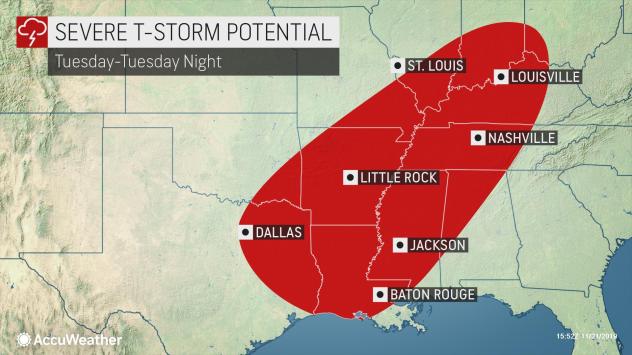 There is a second scenario that is being weighed in.

"Should the storm end up being weaker, it would tend to move much farther to the east at a very swift pace," Travis said. 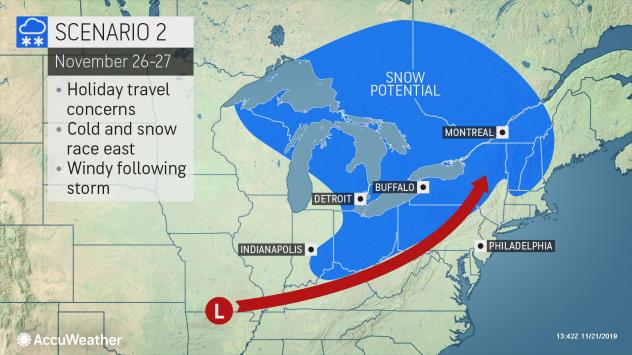 In this scenario, colder air, snow and slippery travel would also spread farther to the south and east along the Interstate 70, 80 and 90 corridors and reach parts of the Ohio Valley, eastern Great Lakes and the central and northern Appalachians during Tuesday night and Wednesday.

"In this faster, weaker scenario, there is a chance the storm turns far enough to the east to allow some snow and/or a quick freeze-up in parts of Indiana, Ohio and western and northern Pennsylvania during Tuesday night," AccuWeather Meteorologist Max Gawryla said.

Regardless, if either of the two scenarios occur, or something in between, major travel disruptions are likely over part of the Central states and the risk of some weather-related disruptions will exist in parts of the South and the East just prior to and during the middle of the week of Thanksgiving.

Even a brief period of gusty winds pivoting through the major airport hubs of the Northeast with only spotty rain and snow can be detrimental to airline schedules.

So, not only may there be normal heavy holiday traffic on the roads and at the airports, a storm may really throw a wrench into plans during the day and night before Thanksgiving over the Central and Eastern states. 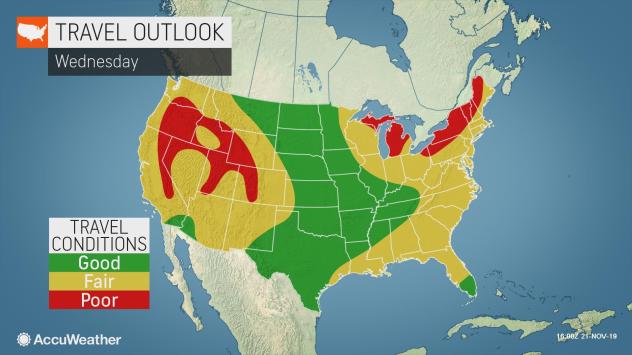 As if the storm east of the Rockies was not enough, it appears a second potent storm will move in from the Pacific Ocean and impact a large part of the West, including California at midweek.

Snow is likely to cause disruptions over the major passes, including along I-80 and perhaps I-5. While rain may greatly benefit fire-ravaged areas of Northern California, slick roads may create dangerous travel for a time.

More than 55 million travelers have plans to venture at least 50 miles away from home from the Friday before Thanksgiving to the Sunday after Thanksgiving, according to the American Automobile Association (AAA). The holiday travel volume is expected to be second-highest behind 2005 since tracking began in 2000, AAA said.

In terms of Thanksgiving travel, in lieu of any bad weather, there's "nothing worse than Wednesday," the AAA said in its statement. Trips made on the Wednesday before Thanksgiving can be four times longer as commuters mix with holiday travelers, according to AAA.

AccuWeather will continue to provide updates for Thanksgiving travel in the coming days. Massive line of thunderstorms drops heavy rain up and down t... Backbone Fire burns out of control in Arizona Lingering drought causes farmers in Wisconsin to get creativ... Hail clanks on back porch during severe storm 'We're not invisible people': Meet these 6 LGBTQ scientists who are ch...