The 34-year-old Colorado man was walking near the Wyoming park's most famous attraction when the incident occurred. 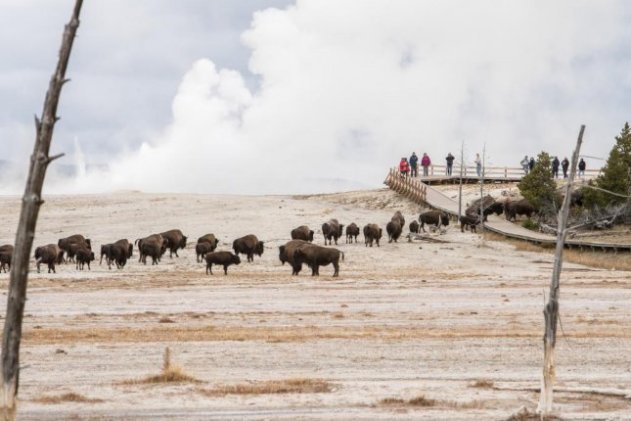 Park officials at Yellowstone said that a Colorado man was injured by a bison this week near the famous Old Faithful geyser. (Jim Peaco/National Park Service file photo)

June 29 (UPI) -- For the second time in less than a month, a wild bison charged a group of people at Yellowstone National Park in Wyoming and gored one of them, park officials said.

The National Park Service said that the bison charged a 34-year-old Colorado man earlier this week near Yellowstone's most famous attraction, the Old Faithful geyser.

Officials said the man was walking with his family near the geyser when the animal abruptly charged them. The man was gored and received an injury to his arm. He was treated at a local hospital and released.

"This incident remains under investigation, and there is no additional information to share," the National Park Service said in a statement. "Wildlife in Yellowstone National Park are wild and can be dangerous when approached.

"When an animal is near a campsite, trail, boardwalk, parking lot, or in a developed area, give it space."

The bison attack was the second at Yellowstone in less than a month. A 25-year-old Ohio woman was gored by one of the large animals on May 31. She was not seriously injured.

"The bison [respond] to the perceived threat by goring the individual," the NPS said. "Bison are unpredictable and can run three times faster than humans.

"Stay more than 25 yards away from all large animals -- bison, elk, bighorn sheep, deer, moose, and coyotes -- and at least 100 yards away from bears and wolves. If need be, turn around and go the other way to avoid interacting with a wild animal in proximity."