The pattern of seemingly nonstop winterlike storms will finally begin to unravel the weekend before Christmas as millions of holiday travelers set out for their destinations -- but AccuWeather meteorologists warn that there could still be enough troublesome weather to cause localized headaches and slowdowns in parts of the United States. 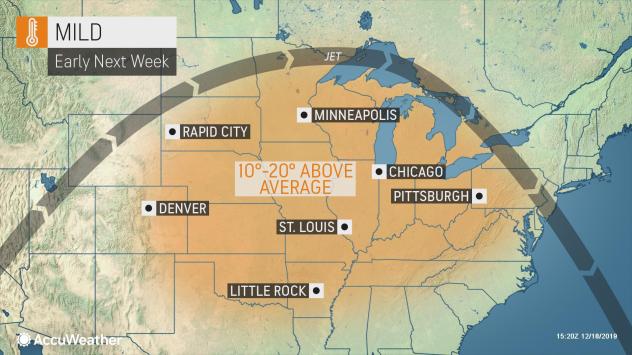 A record 115.6 million travelers are expected to venture at least 50 miles from home this holiday season between Saturday, Dec. 21, and Wednesday, Jan. 1, according to the American Automobile Association (AAA) in its annual outlook. The highest volume of travel is projected to be on the roads, with 104.8 million motorists anticipated. That's more Americans expected to drive than ever before for year-end travel in the nearly 20 years that AAA has kept tabs on holiday traffic.

Most areas from the Rockies to the Plains and Mississippi and Ohio valleys may catch a break during the busy travel period in the days prior to Christmas. 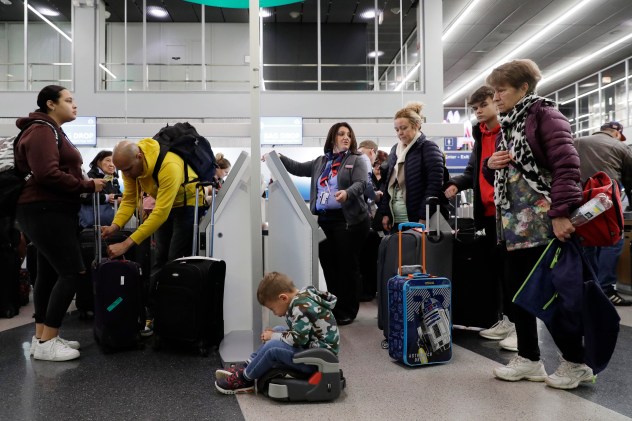 Travelers check in at the American Airlines self ticket counter in Terminal 3 at O'Hare airport in Chicago, Wednesday, Nov. 27, 2019. According to the source, the number of people traveling over the Thanksgiving holiday period is forecast to amount to 55.3 million in 2019. (AP Photo/Nam Y. Huh)

This will come as welcome news after storms have been hitting fast and furious over the Central and Eastern states much of December so far.

"A gap in the storms is beginning. Although, given the time of the year, it would be extremely rare for the entire swath of the lower 48 states to be entirely free of storms over a five- to seven-day period," AccuWeather Senior Meteorologist Brett Anderson said, adding that meteorologists are tracking a few developing weather systems that will keep the upcoming pattern from totally breaking the norm.

Unsettled conditions may be most persistent along Pacific coast

The Pacific coast will be an exception as a slow-moving series of storms is expected to badger the region beginning late this week through the week of Christmas. 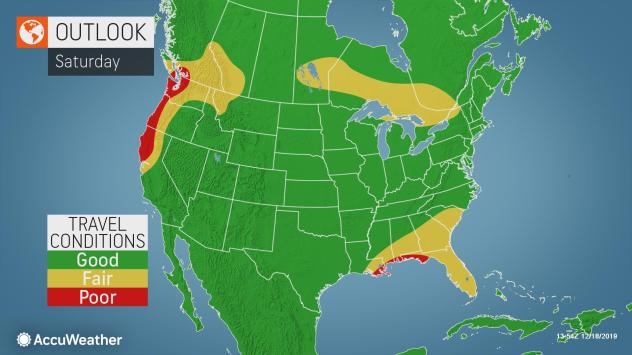 The siege along the West coast will begin gently in the Northwest by the middle of this week, but may evolve into a "Pineapple Express" that brings heavy rain and mountain snow later this week.

Some moisture, short of an atmospheric river, is expected to expand southward along the Pacific coast this weekend through the middle of next week. A series of weak storms is likely to pivot southeastward from the Pacific Ocean and cause periods of rain and mountain snow to shift from Washington and Oregon to California.

During this weekend, it appears freezing levels will remain above the passes in Southern California. That may not be the case in the passes over the northern part of the state, including the heavily traveled Donner Summit. Experts say that motorists venturing over Donner Pass should be prepared for winter driving and make sure their vehicles are equipped to handle snow.

During next week, pockets of snow are likely to spread over the interior West so that not only the Cascades and Sierra Nevada have fresh snow, but also perhaps the Wasatch Range and portions of the Rockies as well.

Holiday air travel: 5 health risks and tips to avoid them Experts debunk 4 winter driving myths Expert explains whether you should opt for all-season or winter tires Storms to bring 1-2 punch of wintry weather from Missouri to Maine

Even though the Northwest may dry out for a time before Christmas, conditions may deteriorate in the Southwest.

"There is the potential for a significant low-elevation rain and mountain snow event to unfold over the Southwest from Christmas Eve to Christmas Day," AccuWeather Long-Range Meteorologist Tyler Roys said.

If the storm strengthens a great deal, then flooding and mudslides may occur and snow could blanket roads over the higher terrain.

Storm to drench southeastern US this weekend

While rain is not nearly as disruptive as ice and snow, a budding storm is likely to enhance the moisture to the point of producing urban flooding as it evolves while traversing the Southeastern states from Sunday to Monday.

This weekend, drenching rain will target areas from Louisiana to Georgia, South Carolina and Florida. 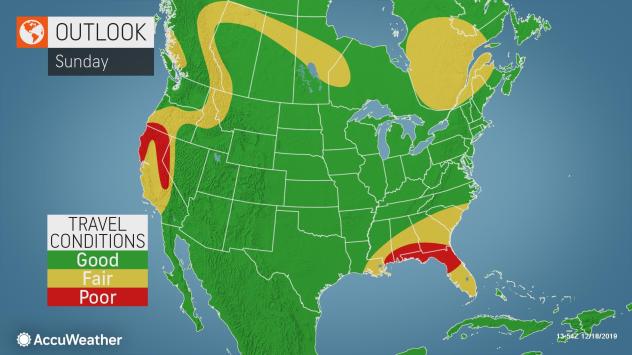 "Downpours, including some thunderstorms, along the eastern Gulf coast and southern Atlantic coast may be heavy enough to impair vision for motorists and may lead to airline delays this weekend to Monday," Paul Pastelok, AccuWeather's top long-range meteorologist, said. Enough rain could fall to cause urban flooding in the Southeast.

Just enough cold air may be in place on the northwestern flank of the storm to produce a bit of snow over the southern part of the Appalachians in western North Carolina and northern Georgia, depending on the forward speed and intensity of the storm.

AccuWeather meteorologists will be monitoring the track of this storm in the Southeast with a close eye. Sometimes storms of this nature tend to strengthen enough to travel farther north, in which case some wintry precipitation may extend into the Northeast.

Alberta clipper storms to produce spotty snow in northeastern US

Travelers may run into wintry conditions as a couple of Alberta clipper storms are forecast to travel from the northern Plains to the Great Lakes and Northeast to the middle of next week, according to Pastelok. 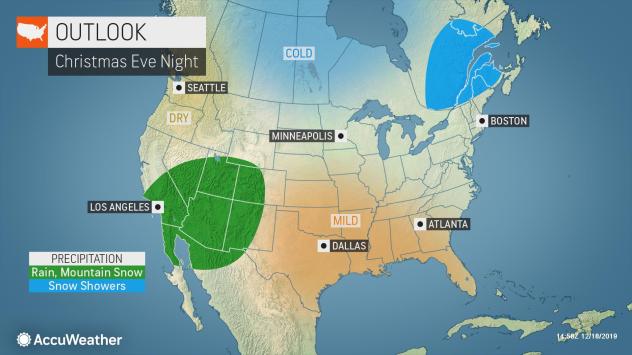 This type of fast-moving storm system tends to be somewhat moisture-starved, but nonetheless narrow zones of moderate snow and patches of light snow can coat the ground when they hit.

One such clipper storm and burst of Arctic air was producing flurries, snow squalls and bands of lake-effect snow on the Wednesday before Christmas.

Another clipper storm could dip farther south to bring a bit of snow to northern New York state and northern New England on Christmas Eve. But for most areas from the Upper Midwest to the mid-Atlantic and New England, most of the time will be dry and mild from this weekend to the middle of next week. 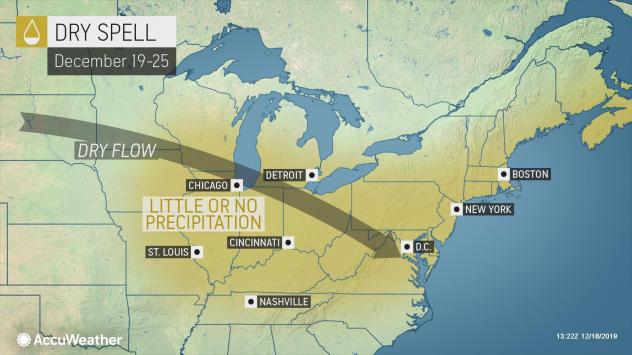 Aside from the impact clipper storms, the weather in the northeastern quarter of the nation is likely to be relatively quiet this weekend through Christmas.

Temperatures are forecast to be 10-20 degrees Fahrenheit above average over a broad area from the Plains to the Atlantic coast. 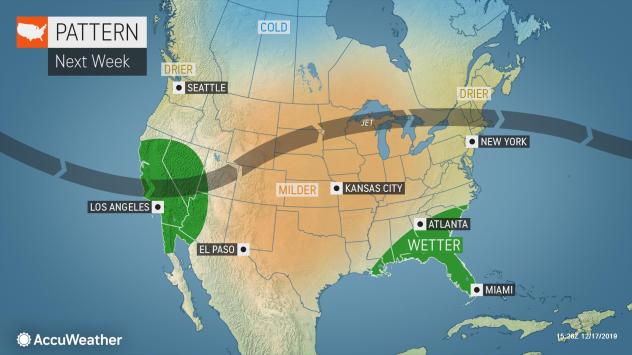 By Christmas Day, some rain may return to part of the Northwest, and it is possible a spotty wintry mix breaks out over parts of the Plains and Upper Midwest.

"But overall, it could be a lot worse for millions of people who plan on hitting the roads or taking to the air just prior to Christmas," Pastelok stated.