Sun unleashes biggest solar flare since 2017. Is our star waking up?

Check out this massive solar flare.

The sun may be coming out of its slumber at long last.

On Friday morning, our star fired off its strongest flare since October 2017, an eruption spotted by NASA's sun-watching Solar Dynamics Observatory (SDO). 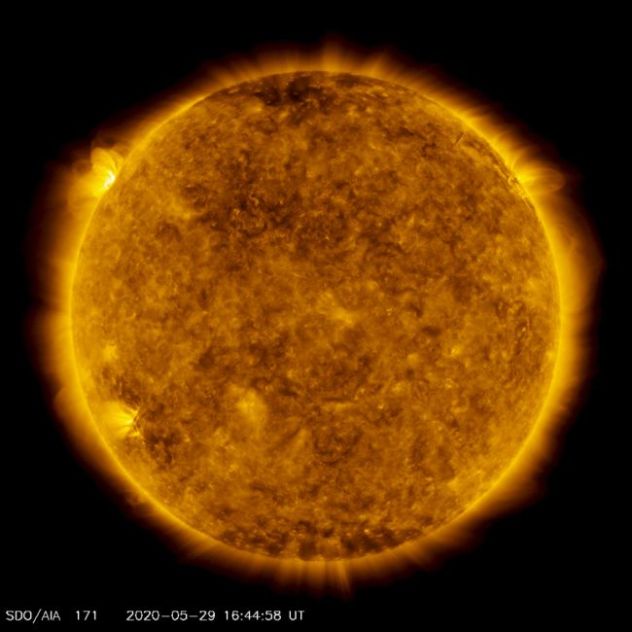 On the upper left side of this image from May 29, 2020, from NASA's Solar Dynamics Observatory — shown here in the 171-angstrom wavelength, which is typically colorized in gold — one can see a spot of light hovering above the left horizon. This light emanates from solar material tracing out magnetic field lines that are hovering over a set of sunspots about to rotate over the left limb of the sun.
(Image: © NASA/Solar Dynamics Observatory/Joy Ng)

Solar flares are bursts of radiation that originate from sunspots, temporary dark and relatively cool patches on the solar surface that boast very strong magnetic fields. Scientists classify strong flares into three categories: C, M and X. Each class is 10 times more powerful than the one beneath it; M flares are 10 times stronger than C flares, but 10 times weaker than X-class events.

Friday's flare was an M-class eruption, so it was no monster. (And it wasn't aimed at Earth, so there's no chance of supercharged auroras from a potential associated coronal mass ejection of solar plasma.) But the outburst could still be a sign that the sun is ramping up to a more active phase of its 11-year activity cycle, NASA officials said. If that's the case, the most recent such cycle, known as Solar Cycle 24, may already have come to an end.