June 11 (UPI) -- To protect astronauts and satellites from dangerous and disruptive solar radiation, space weather forecasters need to pay closer attention to the speed of solar eruptions as they approach Earth, researchers say.

Solar storms are caused by solar phenomena called coronal mass ejections. According to a new study, published this week in the journal Space Weather, measuring the speed at which solar storms are traveling when they hit Earth can help researchers predict the storm's threat to astronauts and space-based communication systems. 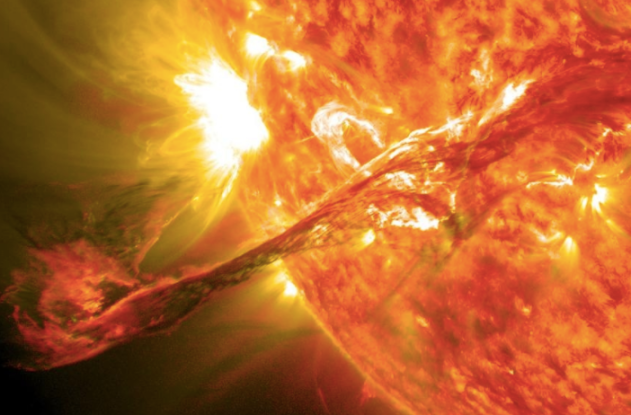 The speed at which a coronal mass ejection leaps from the sun can help scientists predict when it will hit Earth, but the data isn't particularly useful for predicting a solar storm's severity. (Photo/NASA)

By measuring the speed at which coronal mass ejections leap from the sun's surface, forecasters can more accurately predict when storms will hit Earth.

But not all solar storms harm satellites. Simply predicting when Earth-bound solar storms will arrive is sure to trigger plenty of false alarms.

"Not all solar storms trigger severe space weather at Earth," lead study author Mathew Owens, professor and space scientist at the University of Reading, told UPI in an email. "Therefore just predicting when a storm will arrive at Earth is of limited use for predicting space weather. It's a bit like having a forecast of when there'll be a cloud overhead and hoping to use that to predict when it will rain."

To determine how useful it is to know when coronal mass ejections will hit Earth, Owens and his colleagues turned to historic solar storm measurements.

"We have a database of around 20 years of observations of solar storms both close to the sun and just moments before they reach the Earth," Owens said. "This database was used to perform 'hindcasts' -- that is, make forecasts after the fact -- and test how useful it is to know when a solar storm will arrive."

The data showed that accurately predicting the arrival of solar storms is of limited use. However, the analysis showed the speed solar storms are moving at when they arrive at Earth can help forecasters better predict which storms are most likely to pose a risk to astronauts and satellites.

"We're hoping to use the same approach and data set to determine 'how good is good enough' for space weather forecasting?" Owens said. "How accurately do you need to know when a solar storm will arrive at Earth, or how precisely do you need to know how fast it will be moving when it gets here, in order for it to be useful."