The sun and moon converged in a dazzling "ring of fire" solar eclipse Sunday (June 21), stunning skywatchers across parts of Africa, Asia and more.

During the solar spectacle, known as an annular solar eclipse, the moon covered most — but not all — of the sun. During this type of eclipse, a bright "ring of fire" of the sun remains visible around the edge of the moon. The eclipse began at 11:45 p.m. EDT Saturday, June 20 (0345 GMT Sunday) and went until 5:34 a.m. EDT (1034 GMT) this morning.

The crown jewel of the event, the "ring of fire" section of the eclipse when the moon, sun and Earth lined up just so to create the brilliant effect (also known as maximum eclipse), occurred at around 2:40 am EDT (0640 GMT). 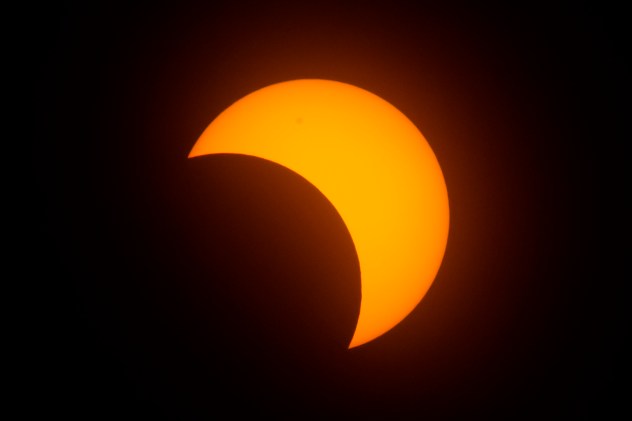 The moon passes between the sun and the earth during a partial solar eclipse as seen in Beijing, Sunday, June 21, 2020. (AP Photo/Mark Schiefelbein)

While not everyone around the world was able to view the event, it was visible either in its entirety or as a partial solar eclipse to potentially millions of spectators across the Democratic Republic of the Congo, Central African Republic, South Sudan, Sudan, Ethiopia, the Red Sea, Yemen, Saudi Arabia, Oman, the Gulf of Oman, Pakistan, India, China, Taiwan, the Philippine Sea (south of Guam) and northern Australia had a front-row seat for the stellar performance. Here's a look at some of the amazing views.