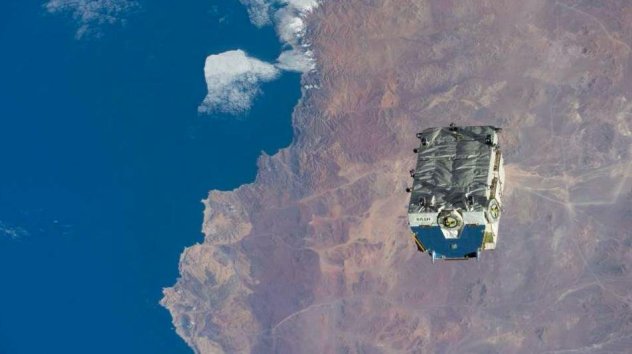 A 2.9-ton pallet of nickel-hydrogen batteries became the most massive single piece of junk ever to be jettisoned from the International Space Station. Photo courtesy NASA

March 15 (UPI) -- A pallet of batteries was released from the International Space Station last week, becoming the heaviest single piece of junk ever jettisoned from the station.

Mission controllers in Houston commanded the Canadarm2 robotic arm to release an external pallet loaded with the 2.9 tons of nickel-hydrogen batteries into Earth's orbit Thursday morning.

"It is safely moving away from the station and will orbit Earth between two to four years before burning up harmlessly in the atmosphere," NASA said in a statement.

NASA representative Leah Cheshier confirmed to Gizmodo that the pallet is the largest object "mass wise" ever to be dispelled from the ISS.

"More than twice the mass of the Early Ammonia Servicing System tank jettisoned by spacewalker Clay Anderson during the STS-118 mission in 2007," Cheshier said.

The external pallet was left on the space station by the final HTV supply ship last May, as the batteries were replaced with more powerful lithium-ion power storage units.

Originally, the batteries were supposed to be placed inside an HTV and released from the ISS burning up upon re-entry> However a tedious spacewalk Feb. 1 by astronauts Mike Hopkins and Victor Glover disrupted the mission schedule and left the pallet attached to the space station.

Cheshier assured that ballistics officers "indicate no threat" of the pallet colliding with other space objects, but added that it will be tracked by the U.S. Space Command.

8 of the best telescopes for beginner astronomers
Legacy of pioneering women at NASA continues to inspire today
NASA releases first video, audio from new Mars rover Perseverance
Report a Typo
Comments that don't add to the conversation may be automatically or manually removed by Facebook or AccuWeather. Profanity, personal attacks, and spam will not be tolerated.
Comments
Hide Comments