As a severe thunderstorm moved through the Tampa area, one young photographer captured a rare tornado feature overhead.

A storm chaser gets a rare view of a tornado forming from directly above in New Port Richey, Florida.

As a severe thunderstorm moved through New Port Richey, Florida, located just northwest of Tampa, a young weather photographer noticed a unique sight overhead and quickly ran to capture the phenomenon on video.

The photographer, Nicholas Krasznavolgyi, saw the storm system barreling toward him while monitoring it inside his home. While monitoring the incoming weather with a weather radar, the photographer saw an incredibly unique sight overhead his family home -- the mouth of a tornado as it formed overhead.

Krasznavolgyi grabbed his camera and tripod and rushed outside to film the mouth of the tornado, which is where the rotation of the cloud is centered, as it passed over his home.

A vivid display of clouds can be seen rotating in the video as grey-shaded clouds mixed into the center like a vortex. A blueish hue surrounds the rotating clouds and creates a remarkable visual almost like paint mixing in the sky. 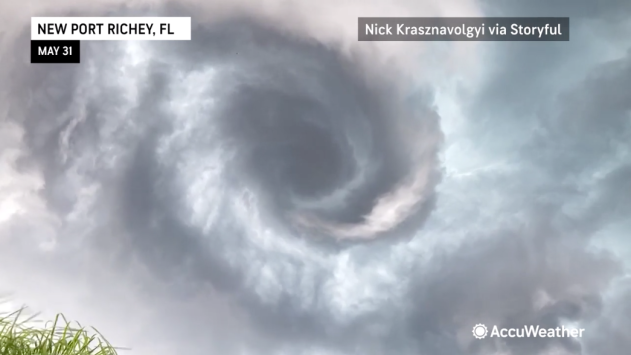 The mouth of a tornado captured by Nick Krasznavolgyi (Storyful)

"It looks like it's rotating clockwise, but that's what a counter-clockwise rotation looks like from underneath -- you say a tornado is 'rotating-counter clockwise' by viewing it from above, like a hurricane viewed on satellite," said AccuWeather Senior Weather Editor Jesse Ferrell.

"It's a tornado!" shouted Krasznavolgyi at the end of the video. Krasznavolgyi said on Twitter that as he yelled, he could see trees being lofted, but was unable to capture it on camera. Despite the miss, the video remains a rare and unique piece of weather visual.

"You don't see a lot of videos like this because the odds are against being directly underneath a funnel cloud, or if you're underneath a tornado, you may not survive to share the video," explained Ferrell.

The National Weather Service confirmed a tornado touched down in the area shortly after the video was taken on May 31. According to the report, the tornado caused a tree to fall on three cars and another on a power line in Pasco County, Florida. No injuries were reported as a result of the tornado.

Two other tornadoes were reported in Florida on the day the video was taken, including a funnel cloud sighting in Sarasota and Hillsborough County.