According to Reuters, researchers found that viral droplets can also live on surfaces and infect people for up to 3 days.

It's been a stormy March for much the Middle East, and that trend will continue as another storm threatens the region with more disruptive weather.

Last week, heavy rain targeted portions of the area, including Iraq. On Thursday, the governor of Nineveh confirmed more than 1,330 homes were destroyed in flooding in Mosul.

The city was placed on lockdown by the governor earlier in the week to help reduce the spread of coronavirus in the area.

According to the National, neighborhoods surrounding the Tigris river in northern Iraq were the hardest hit by flooding earlier this week. Residents in the region were forced to evacuate their homes.

Flash flooding was also reported in Duhok as well, leaving rubble in the streets and picking up and piling cars.

The next storm emerged from the Mediterranean Sea and move into the Middle East on Friday bringing another unhelpful dose of wet weather.

This storm brought showers and thunderstorms from southern Turkey and northern Iraq to northern Saudi Arabia and Jordan through the beginning of the weekend. Meanwhile, colder air moving in with the storm allowed snow to fall across parts of Turkey, covering roads into the higher elevations.

The rain and thunderstorms on the southern side of the storm were equally as disruptive, especially from northeastern Syria and northwestern Iraq to the coast of the Mediterranean.

Additional rainfall in the hardest hit areas earlier this week, like Mosul in Iraq, could bring even higher water levels and threaten mudslides in addition to flooding.

"While the greatest severe weather threat with any thunderstorms will be lightning, isolated cases of gusty winds and hail are also possible," added Houk.

Any gusty winds arriving ahead of precipitation helped to stir up any sand, creating a sand or dust storm.

As the storm continued to move east into Iraq and Iran through the weekend, it produced more severe weather for locations around the Persian Gulf.

The threat for severe weather will continue to move east into the beginning of the week as the storm advances.

Gusty thunderstorms will extend into parts of Pakistan, southern Afghanistan and northeastern Oman through Monday. 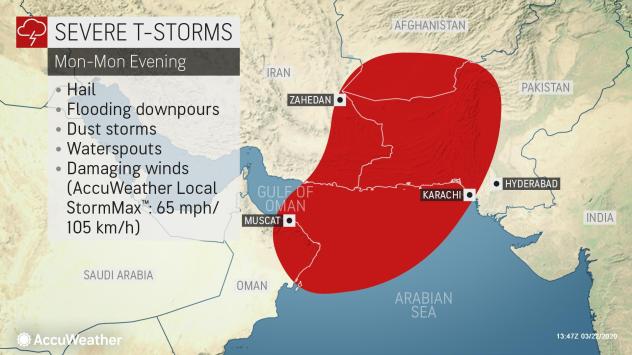 Isolated waterspouts will even be possible at coastal locations. A waterspout or two in the region may move onto land.

Residents in the region should remain alert of the changing weather conditions and have a safe place to seek shelter.

The storm will move away from the area through next week, allowing dry conditions to return to the region as a whole. More storminess could return to Turkey by the middle of next week.