Fort Worth, Texas, Wichita, Kansas, and Oklahoma City are just a few of the cities at risk for powerful thunderstorms.

After drenching, potent storms expanded across the central United States on Wednesday, another round of severe weather is on the way for the waterlogged region.

A handful of spotty but locally strong storms fired up late Monday evening and continued into Tuesday afternoon across portions of Texas, Oklahoma and Kansas.

Within these storms, two brief EF0 tornadoes did manage to touch down in Texas Tuesday morning CDT. The first of which was on the ground for two minutes in McMahan, Texas, and the second of which traversed a 2.6-mile path in seven minutes just west of Smithville, Texas.

A round of severe thunderstorms ignited from western Texas and western Kansas on Wednesday evening and pushed eastward overnight. These storms produced damaging winds and hail over portions of Texas, Oklahoma and Kansas, nearly the same area that was worked over into Tuesday.

Another round of severe, likely more potent, thunderstorms will fire up Thursday across the central U.S.

“Thursday will bring yet another day of violent weather to the nation’s midsection as the storm responsible for the storminess of the last few days runs into a large area of high pressure over the eastern U.S.,” AccuWeather Meteorologist Maura Kelly said. 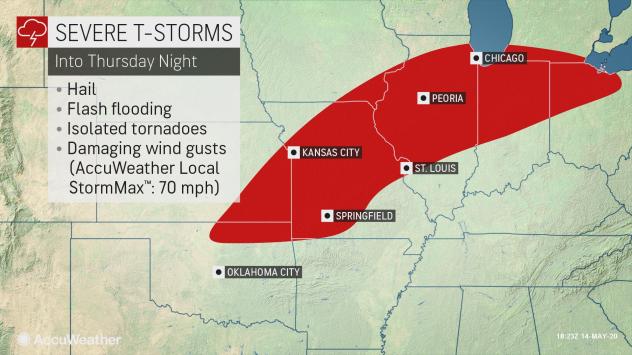 Not many areas from the southern Plains to the Great Lakes will stay completely dry on Thursday as showers and thunderstorms are expected over a wide swath of the country. However, AccuWeather meteorologists have pinpointed an area of greatest concern for violent thunderstorms through Thursday night.

Residents from far northeastern Oklahoma through northern Illinois and into northwestern Ohio will need to stay weather aware through Thursday night as storms capable of hail, heavy downpours and damaging wind gusts are set to impact the region.

An AccuWeather Local StormMax™ of 70 mph is possible within the strongest storms Thursday.

Major Midwest metros including Chicago, and Kansas City, Missouri, will be in the path of these feisty storms.

Just before 3:20 p.m. CDT, hail ranging from one inch in diameter to larger than golf balls fell over Galloway, Missouri, on Thursday.

Professional landscape photographer Barry Butler captured a stunning image of lightning striking the top of the Hancock Tower in Chicago as storms rolled through the Windy City around 7:30 a.m. local time Thursday. 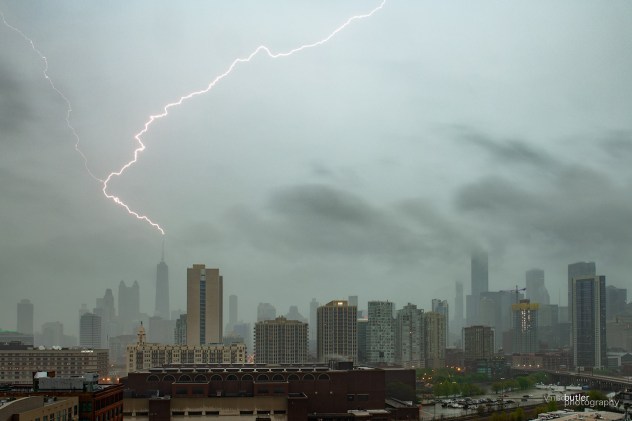 Hurricane season may get early start near southeast US
AccuWeather School: Why your favorite swimming spot could be dangerous
Daily coronavirus briefing: ‘Oldest woman’ in Spain beats COVID-19
Severe storms to mark return of soggy, cool pattern in the Northeast

As this storm system tracks eastward on Friday, the threat for severe thunderstorms will shift into the northeastern U.S. 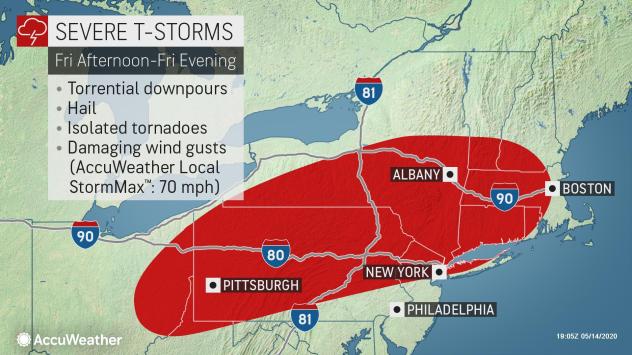 An AccuWeather Local StormMax™ of 60 mph is possible within the strongest storms Friday.

Despite the threat for the strongest storms shifting away from the nation’s midsection on Friday, dry conditions will continue to elude much of the area.

“A more regional problem may develop related to heavy, repeating rainfall in the coming days, mainly in the South Central states,” Kelly said. 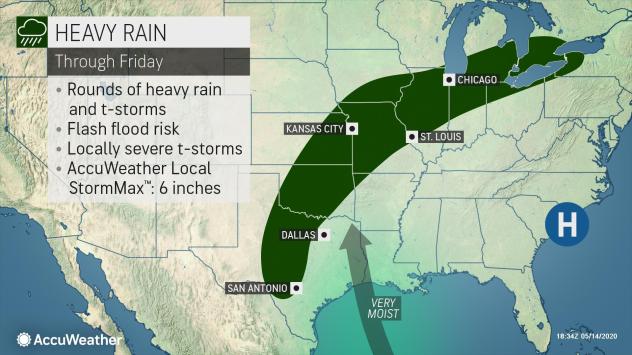 Friday, rain and storms will soak the same area from the southern Plains to the Ohio Valley that has experienced multiple rounds of wet weather since the start of the week. Flash flooding will remain a prominent concern over the area on Friday as the ground is already saturated.

Repeated rounds of rainfall can lead to travel delays for essential workers across the region as ponding can develop across roadways, especially in low-lying or poor drainage areas.

Residents of the Plains and Mississippi Valley hoping for a dry, sunny day to step outside for some fresh air while following proper social distancing guidelines, may have to wait through the weekend. Rain and storms remain in the forecast over the area through Sunday as a low pressure system develops over Texas and unleashes torrential rain over portions of the southern Plains and lower Mississippi Valley. 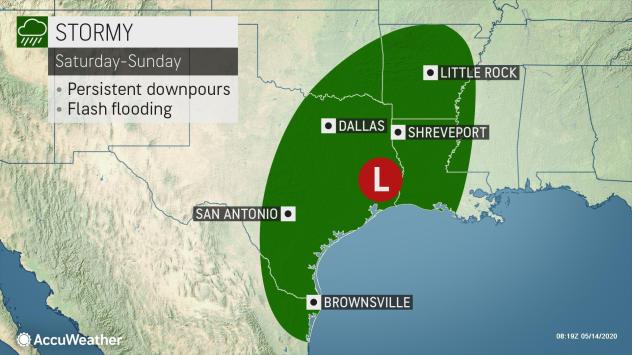 “This weekend’s non-tropical storm will soak Texas at the same time a separate storm offshore of the Southeast coast can kick off the Atlantic hurricane season early,” Kelly said.