Molly Fulghan was traveling through Madill, Oklahoma, in her car when she and her friend spotted this tornado on April 22. Both she and her passenger are safe.

On the heels of Thursday's severe weather and tornado outbreak across the southern United States, yet another eruption of violent thunderstorms began Friday night that may last through the middle of the weekend.

The main axis of severe weather is a few hundred miles farther to the north, when compared to the storms during the middle days of this week, although some hard-hit areas, such as eastern parts of Oklahoma, were once again in the path of severe weather. 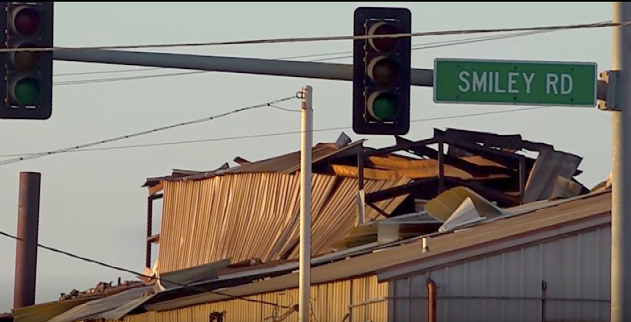 The main corridor of damaging thunderstorms focused along the Interstate 40 and I-20 corridors over the Mississippi Valley on Friday night, rather than the I-10 to I-20 zone like the severe weather from Thursday.

When the air is very cold aloft, like it often is during the spring, hailstones can more easily form and grow to significant size compared to when the air is just marginally cool aloft. 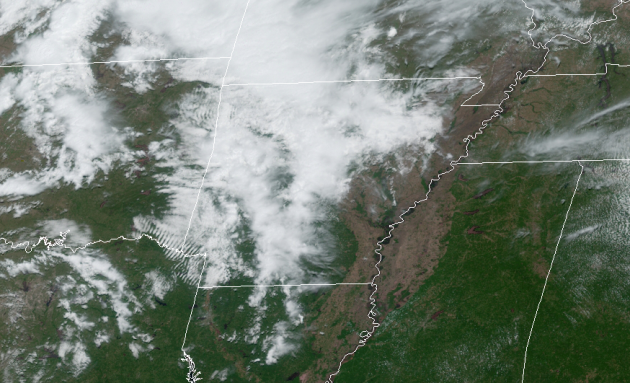 The storms produced hail up to the size of golf balls from eastern Oklahoma to Arkansas, southern Missouri, the northeastern corner of Texas. In Bokchito, Oklahoma, hail the size of tennis balls fell over the areas around 6:45 p.m. CT on Friday, breaking windows at Rock Creek School, according to the Storm Prediction Center. Hail the size of half-dollar coins fell in Haughton, Louisiana around 9:14 p.m. CT on Friday. 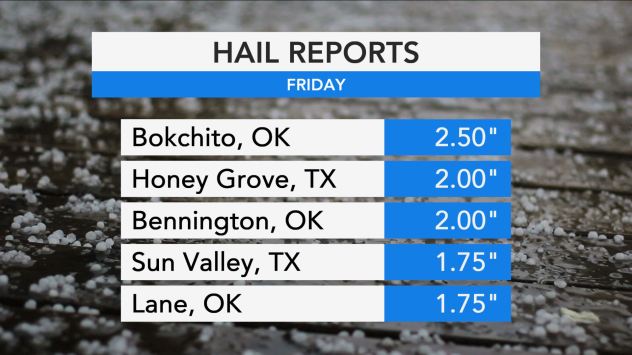 Since there must be strong winds inside the storms to keep the hail airborne long enough to grow in size, some of the strong winds can also rush down to the surface and lead to damaging straight-line wind gusts as well. Winds of up to 65 mph were recorded in Pryor, Oklahoma just before 6:30 p.m. CT. Gusty winds reached Arkansas in the evening as the Little Rock Air Force Base reported winds up to 65 mph around 11:30 p.m. CT.

Tornadoes erupt across south-central US, killing at least 6 and causing significant damage
How to protect your car from hail
Winter to strike back at northeastern US with another dose of snow

As with any severe thunderstorm, there is always a chance of a tornado being spawned. That could happen as there may wind shear present as well. Wind shear is the increase in wind speed or change in wind direction as the air ascends higher in the atmosphere.

Energy in the middle and upper part of the atmosphere can outweigh the shortcomings warmth and moisture from the Gulf of Mexico in this case.

There were at least three preliminary tornado reports by the SPC on Friday evening. A tornado spun up in Bennington, Oklahoma and Dodd City, Texas, respectively, while a "weak and brief landspout" was spotted in Malta Bend, Missouri.

The storms may rebound from the southern Appalachians to the southern Atlantic coast on Saturday. An AccuWeather Local StormMax™ of 70 mph is forecast for these areas. 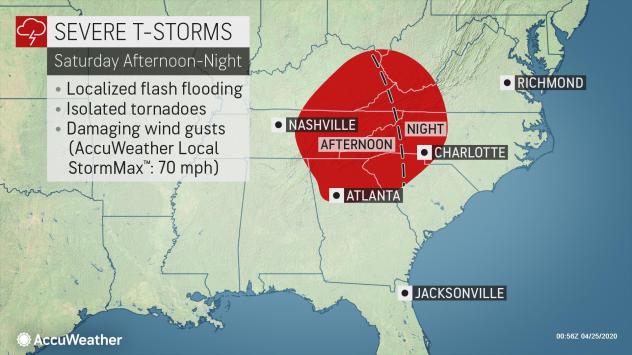 There is a chance that heavy storms erupt in the eastern portion of the Ohio Valley and West Virginia mountains on Saturday as well.

"As the storm presses on into the chillier air in the Northeast, an area of drenching rain will evolve over the central Appalachian Mountains, mid-Atlantic and New England as the weekend progresses," AccuWeather Senior Meteorologist Brett Anderson said.

The same chaotic storm will bring snow to the higher elevations of the Northeast.

The next storm that has the potential to produce severe weather will follow the system from Friday to Saturday as it drops southeastward from Canada next week.

That system could be more successful at drawing warm, humid air northward from the Gulf of Mexico during the middle part of next week or just prior to the end of April. 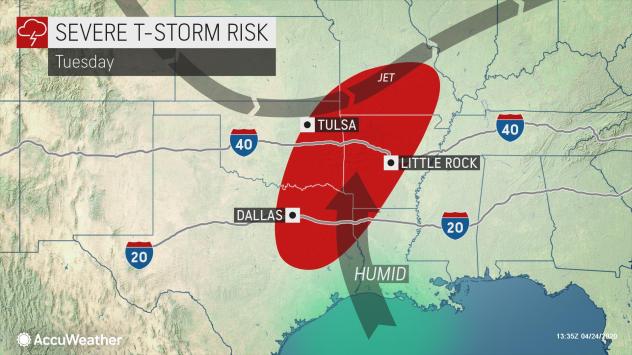 If that transpires, a large outbreak of severe weather could unfold in the Southern, Eastern and Midwestern states. 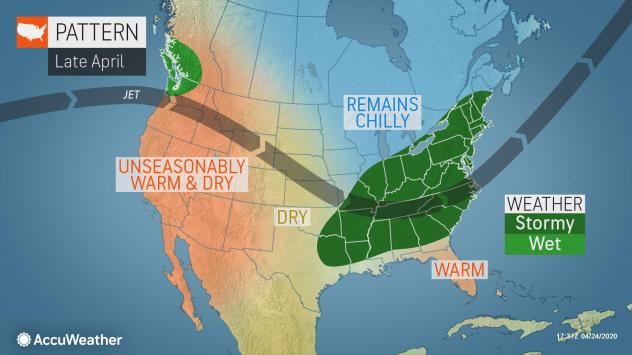 "At this early stage, it looks like the greatest threat of severe weather during the middle of next week will extend from the middle Mississippi Valley to the Tennessee Valley," AccuWeather Lead Long-Range Meteorologist Paul Pastelok stated.