A powerful storm crossed over Flomaton, Alabama, on April 23 releasing a massive amount of rain on the town. Drainage systems had a hard time keeping up.

A cold front dropping into Turkey from the north and a storm system moving eastward from the Mediterranean Sea will combine to bring wet and windy weather from Turkey to Saudi Arabia into Sunday. Places like Egypt have already felt the wrath of the unsettled weather pattern unfolding across the region.

After a rainy start to the week in northern Turkey, the wet weather expanded to central and southern Turkey by Wednesday.

On Wednesday, heavy thunderstorms caused flooding as well as large hail in southeastern Turkey. There are reports that one person was killed after being struck by lightning and three others were injured after another lightning strike.

In addition to Turkey, much of Georgia, Armenia and western Azerbaijan had unsettled weather conditions during the middle of the week.

Going into Sunday, more wet weather is expected, in addition to the onset of windier conditions. 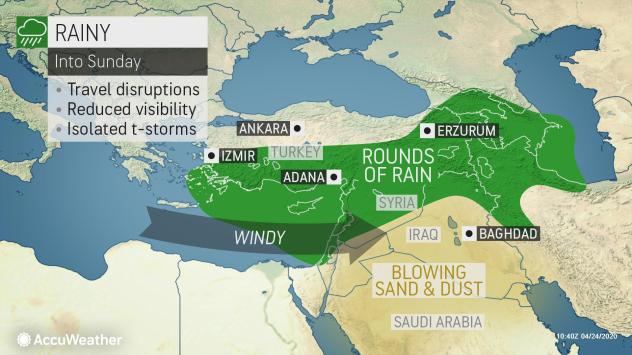 The next round of rain moved from the Mediterranean Sea on Friday and will bring showers to southwestern Turkey from Antalya to Mersin, then sweeping into Lebanon and Syria through Sunday.

This system will also bring widespread rain across parts of the higher elevations of eastern Turkey, Georgia and Armenia. By Sunday, rainfall will reach northern Iraq and northwestern Iran.

While precipitation will be widespread, it is not expected to be heavy enough to lead to major incidents of flooding since it will be spread out over several days.

With the chilly air, snow levels will be lower as well. Houk adds, “There can be snow accumulation down to elevations near 1,700 m (5,600 feet).”

The majority of significant accumulations are expected to be confined to the higher mountains, although some places could also have flakes mixing in, especially overnight.

In areas farther to the south, where rain is not wetting the ground, strong winds are expected to cause blowing sand and dust.

Houk explains, “Blowing sand and dust will become a problem through the end of the week and over the weekend as the jet stream shifts a little farther to the south.”

High winds already stirred trouble across Egypt on Friday, as a major sandstorm forced the closure of several Red Sea Ports and major highways across the country. Authorities urged Egyptians with respiratory illnesses to stay inside. The storm was so significant it turned skies of the nation's capital, Cairo, an eerie yellow color, and the storm could be seen from space.

Disruptions due to icy conditions continue in Little Rock