Rinse and repeat: Southern US to face more volatile weather

Students are returning to school after an EF3 tornado hit a 5-mile path in Arkansas, including Springdale, where a school gymnasium and many other facilities were damaged.

AccuWeather meteorologists expect April to follow in March's footsteps as the table is set for another round of severe thunderstorms, including possible tornadoes, across the South next week. The tornado risk may be accompanied by a heightened flash flood danger.

A dip in the jet stream across the center of the country early next week is expected to allow a storm to travel from the Northwest states to the southern Plains.

"As this feature moves southeastward, it will pull up moisture from the western Gulf of Mexico," said AccuWeather Lead Long-Range Meteorologist Paul Pastelok, emphasizing this will help to provide one of the atmospheric ingredients necessary for severe weather early next week. 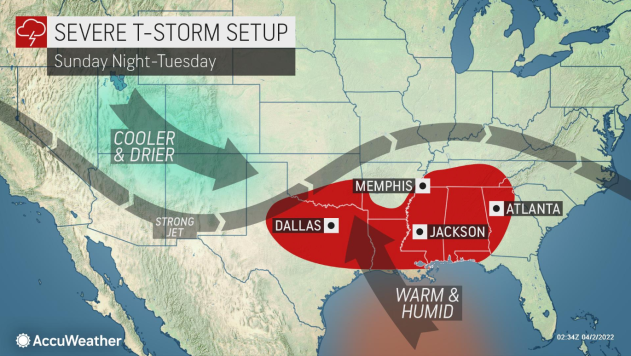 The initial area of concern for severe weather in the first few days of the week will be focused on portions of Oklahoma, Texas, Arkansas and Louisiana. In these areas, when compared to the recent outbreaks, the hazardous weather may be slower to evolve and spread eastward Sunday night into Monday night. It is possible that the slow-moving nature of downpours and thunderstorms may trigger localized flash flooding, rather than an outbreak of severe weather at the start of the week.

As the storm moves along, portions of the Southeast and Gulf Coast could all be at risk for severe thunderstorms during Tuesday and even Wednesday of next week, depending on the exact speed of the storm. Portions of Tennessee, Mississippi, Alabama, Georgia and the Florida Panhandle could all face volatile weather these days. 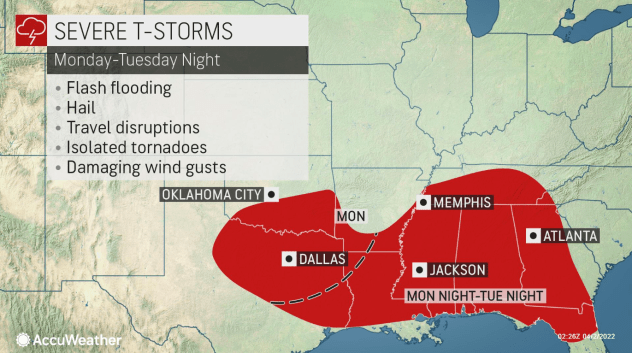 "All modes of severe weather could be possible at this point, from flooding downpours and hail to damaging winds and tornadoes," Pastelok added.

Some of the areas that could be threatened by next week's severe weather have already been hit hard by the destructive thunderstorms and tornadoes so far this spring.

On Wednesday, March 30, more than two dozen preliminary tornadoes were spawned from near the Texas-Louisiana border to the western Florida Panhandle. Preliminarily, this active day pushed the tornado count so far in March 2022 past 200, which, once confirmed, would break the tornado record for March of 192 set in 2017.

In early March, AccuWeather long-range meteorologists predicted that 2022 would be filled with more tornadoes than in recent years. The average number of tornadoes across the United States in the month of March is 75, spread across 21 states, according to the National Weather Service's Storm Prediction Center.

Jacksboro, Texas, a community about 60 miles northwest of Fort Worth, is one of the many areas reeling from the active spring. Residents in the city are still cleaning up from an EF3 tornado that struck the area Monday, March 21. Jacksboro's elementary and high schools both took a direct hit from the twister's estimated 140-mph winds. Those in the New Orleans area could also be threatened by severe weather once again following an EF3 tornado that badly damaged portions of the city that were also hit by Hurricane Katrina in 2005.

AccuWeather meteorologists say another hazard may emerge in the pattern next week regardless of the extent of severe thunderstorms -- persistent downpours that heighten the risk of flash flooding.

Some parts of the South could use a thorough soaking, but the rain may come down at too quick of a pace for the ground to keep up.

"The Southeast could see rainfall rates of 2-3 inches per hour in the heaviest thunderstorms," Pastelok said.

This heavy rain could lead to sudden rises in small streams as well as overwhelm storm drains to the point of flooding secondary roadways, and neighborhoods. Even if serious flooding does not develop, travel delays and disrupted outdoor plans are likely to result from the stormier pattern.

"This will add to recent rainfall and help to break the drought slowly across northern Florida, Georgia and South Carolina," Pastelok said. However, forecasters do not expect the drought to be completely erased as drier weather is expected later in April, he noted.

Texas community picking up the pieces after destructive EF3 tornado

What are 'discrete cell' thunderstorms?