A stifling heat wave that gradually built throughout much of western Europe this week produced some of the warmest conditions of the year so far. Triple-digit temperatures were recorded in some of the continent's biggest cities, including the United Kingdom's capital of London.

As this high pressure expanded northward, temperatures surged across western Europe on Friday. Highs in the (upper 80s to upper 90s F) were common across southern England, France, western Germany, Spain, Switzerland and Italy into the afternoon hours. 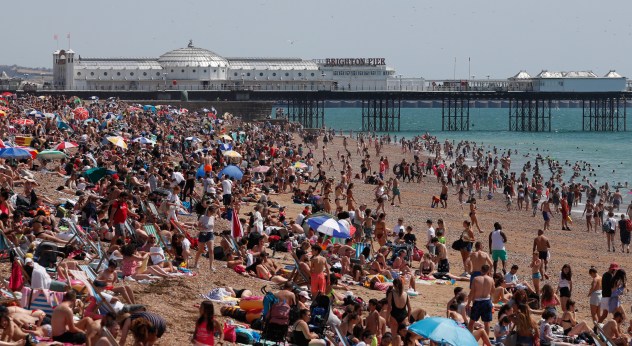 Beachgoers enjoy the sunshine and sea on what is now Britain's hottest day of the year so far, in Brighton, England, Friday, July 31, 2020. (AP Photo/Alastair Grant)

Some locations in France and Spain climbed above the 38 degree C (100 degree F) mark to end the week, including Paris, which reached 39 C (102 F) for about an hour.

Temperatures across western Europe have been on the rise throughout the week.

Temperatures crept higher across France on Wednesday and Thursday, with the sweltering levels waiting for the second half of the week. Temperatures in the upper 20s C (upper 70s and lower 80s F) on Tuesday were replaced with highs in the 30s to near 40 C (middle 80s to lower 100s F), mainly across southern locations, on Thursday.

Widespread highs in the 30s and lower 40s C (90s and lower 100s F) also returned to Spain and eastern Portugal this week.

While these are above-normal temperatures for the end of July, it is not out of the ordinary for the season so far. Early last week, thermometers across Spain had similar readings.

Normal high temperatures for the end of July across western Europe range from 22 C (71 F) in London, United Kingdom, to 30 C (86 F) in Madrid, Spain.

These temperatures carry the risk of causing heat-related illnesses, such as heat exhaustion and heatstroke. Anyone spending extended periods of time outside should stay hydrated and take breaks from the heat in the shade or indoors. Any strenuous activity should try to be scheduled for early mornings or late evenings, out of the heat of the day.

Europe Weather Homepage
Preventing Heat-Related Illness: When the Heat Is Too Hot to Handle
Atlantic may produce another record-breaking tropical system before July ends

While temperature were on the rise across France, so were confirmed coronavirus cases as the country marked a 54 percent increase in cases in mainland France since last week, according to The Guardian.

"There was also an increase in the number of patients admitted to hospital with COVID-19, and the figures for those requiring intensive care went up by one – the first time the figure has increased in 16 weeks," stated the report.

The Guardian added that most of the new cases are believed to be due to large family gatherings as well as private and public events.

"Of those testing positive, 69% were aged 15-44 and of those with the biggest increase were among 20- to 25-year-olds," according to the report.

In addition to continued social distancing, officials have been urging people to wear masks despite the searing heat expected to continue into the weekend. 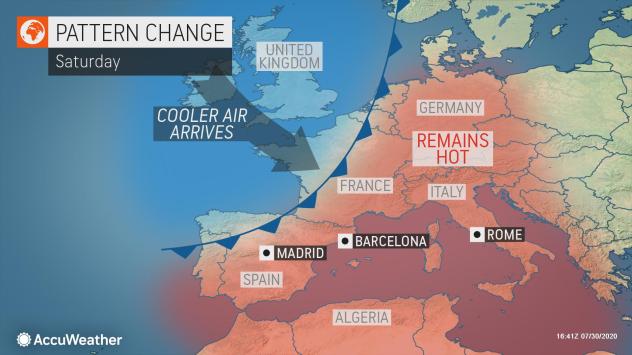 By the beginning of the weekend, a cold front is forecast to sweep across northwestern Europe, bringing temperatures back to normal levels across the U.K.

Hot and dry conditions are expected to continue elsewhere in western Europe through at least the weekend.

This may not be the end of the heat as August arrives. According to Roys, the threat of more heat remains through the middle of the month.

In addition to a weather pattern that will promote above-normal temperatures across France and Germany, a dry ground due to below-normal rainfall across these areas during much of the spring and summer will allow temperatures to once again reach for 35 C (95 F) or higher by the middle of the month.